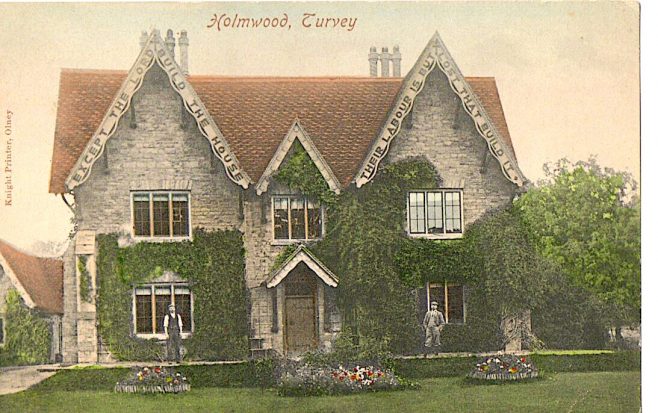 The first house on the right on entering the village from the Bedford direction is Holmwood House.  It was built by Charles Longuet Higgins in 1859 but was never actually occupied by a Longuet Higgins. As with the Infant School, Charles had a quotation from the Bible attached to the building, this one being on the gables and from Psalm 127: 1 “Except the Lord build the house their labour is but lost that build it”. 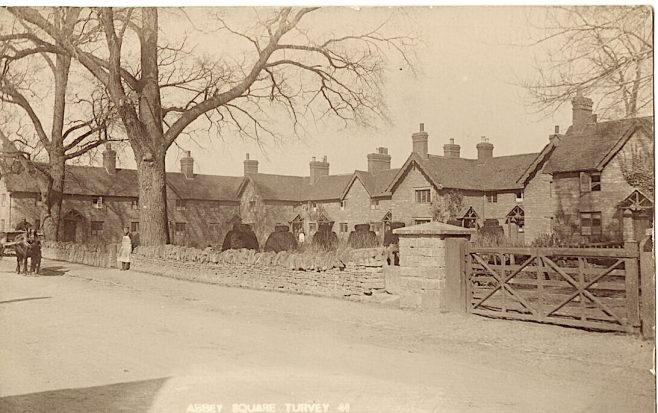 Next on the right is Abbey Square with cottages originally built for employees on the Abbey Farm Estate. The northern set of houses, numbers 5 – 9 were built in the 1760s, whilst the side cottages and No 10 were built around 1850. Turvey’s first school was built in the centre of the Square by John Higgins (Turvey Abbey) in 1815, eventually it became too small and inadequate and was demolished in 1841.

The Yew tree outside of Yew Tree Cottage is, according to the Bedford Borough Tree Officer, the oldest tree in the village, being well over 400 years old. Another Yew tree at Vine Cottage in May Road is also very old. Whilst, at the time of the Enclosure Act, most tree were cut down by the Steward to the Earl of Peterborough to provide fencing, the Yews were left standing because of  their religious significance. Yews are associated with death and resurrection; it was the custom for yew shoots to be buried with the deceased and boughs of yew to be used as ‘Palms’ in Church at Easter. Given the extensive tree planting in the early 1800s it is not a surprise that Turvey now has over 250 protected trees. 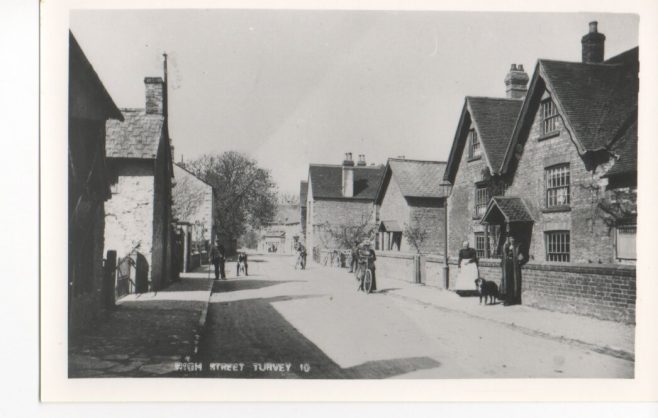 High Street with Bamford’s Yard to the right. 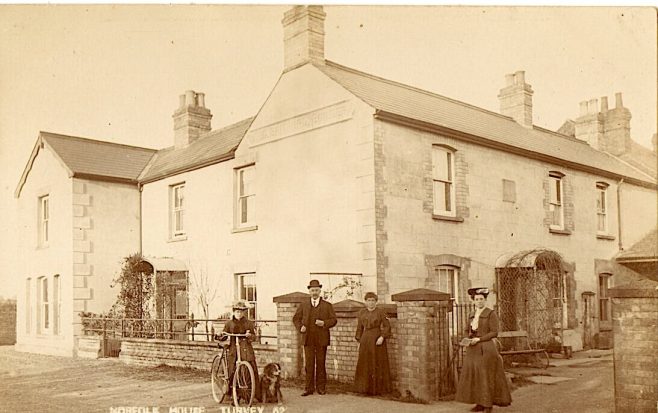 Norfolk House, junction of Bamford’s Lane and May Road built by William Bamford 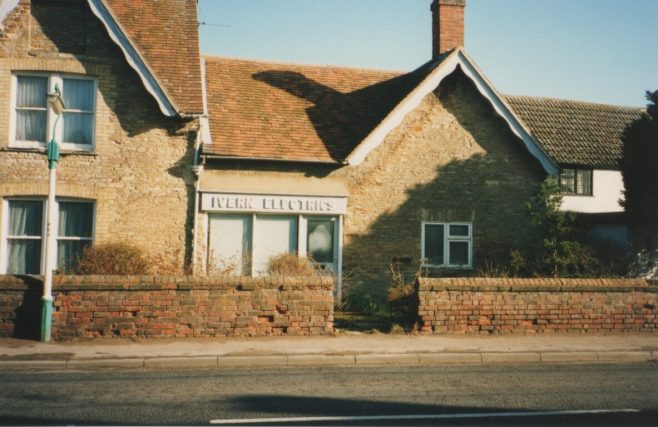 As we come to Bamford’s Yard, we pass ‘Iverns’ , The Old Electrical Store, opposite which is the building erected by Colonel Higgins as a recreation room for the navvies building the railway. He equipped it with comfortable seating, books and daily newspapers and the men were also able to entertain themselves with cards, darts and table tennis. Later, this room would be used by the Scouts and Brownies.

Bamford’s Lane and Yard are named after William Bamford (1857 – 1940). William was a master builder and contractor who built many houses in Turvey as well as running the Turvey Gasworks for 30 years. He owned one side of what is now Bamford’s Lane (Mr Thompson owned the other) and also Bamford’s Yard. There were once iron gates at the northern end of this private road, but the gates were requisitioned during the Second World War and were never replaced. When a row of cottages was pulled down, he built his own property, Norfolk House (which then also incorporated Norfolk Lodge) in the 1890’s. Following the death of his first wife in 1912 he married a Welsh widow, Mrs Adams, in 1914. She encouraged him to go into farming. After she died in 1924, he married again in 1931, this time to Dora Panter who had previously worked for the first Mrs Bamford. He was 74 and she was 34. She refused to live at Norfolk House and so Eventide in Bamford’s Lane was built is 1933, at that point only the second house in Bamford’s Lane.

Bamford’s Yard was originally a builder’s yard with stabling in the courtyard. Over the years, the yard has been home to a range of small businesses, including, Cristo Crisps, W.H. Allen, Thompson Horses, a plastics factory, a carpet factory and ‘Bon Appetit’, a company that made the in-flight meals for business and 1st Class air travellers. 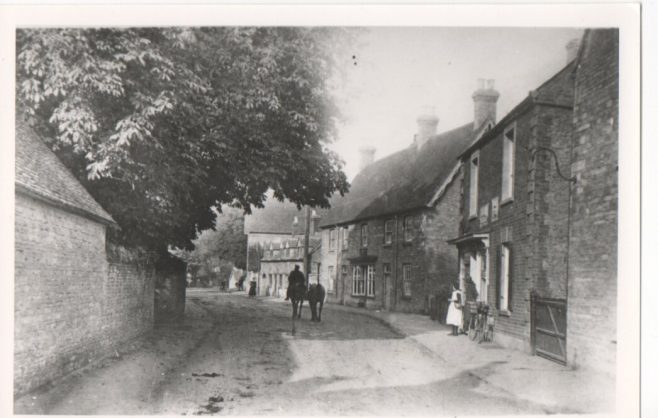 High Street with Bakehouse to the right.

The Old Bakehouse, formally Turvey Antiques, dates from the 1700s and No 4 High Street, Barncroft House, was the flour store for the bakery. By the mid 19th century there were four bakehouses in Turvey serving a population of around one thousand. Bread was an important commodity with most poor people living on bread and dripping and any vegetables  they could grow or procure, with a bit of cheese now and then. To save money they would probably have made their own bread and taken it to the bakehouse to be baked. Even so, that flour and yeast would often account for about three-quarters of a man’s weekly wage. Meat was a rarity, usually confined to the better off although occasionally a bit of meat or suet pudding would be found for Sunday. In the early 1900s, when people were more affluent, it was common for people to take their Sunday lunch to the bakehouse to be roasted.

Thomas Essery, born in Turvey in 1879, remembers there being four bakehouses in the village:

Audio clips used with permission of the University of Leeds, with thanks to the British Library.

It is possible to learn a lot about the history of the village from the occupations of the inhabitants. From the mid 1800’s Turvey was really self-sufficient, everything one needed could be found in the village. Nancy Waters remembers the shops in the High Street from her youth.

The 1851 census recorded 44 different occupations in the village. Whilst the vast majority of men and women were agricultural labourers and lacemakers respectively, the village could also boast having a person employed as a ‘castrator’! By 1861 there were 70 different occupations with again Agricultural Labourers and Lacemakers at the forefront. The amount of building work taking place at this time is reflected in the number of Stone Masons and bricklayers to be found in the village which could also boast of having a barber and chimney sweep. The castrator was no longer with us.

The alley now known as Barncroft was originally called Kitt’s Alley or just The Alley. Today, it unfortunately also goes by the name of “dog poo alley”!

The original Grove Farm was constructed in the early 1700s, but the farmhouse and buildings were remodelled in 1810 to form the buildings we see today. The farm which originally formed part of the Turvey Abbey Estate stretched as far as and included the current recreation ground. In the 1960s, the farm ceased to operate and the site was redeveloped to include the residential properties to which its name is now attached. 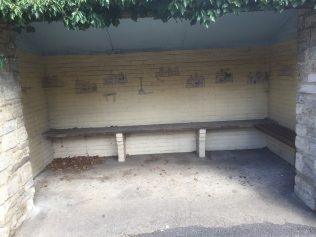 A more recent piece of heritage can be found in the form of the Bus Shelter, which was erected in 1960 and enhanced with a mural of images of Turvey’s buildings and features by Sarah Ford in 2004. 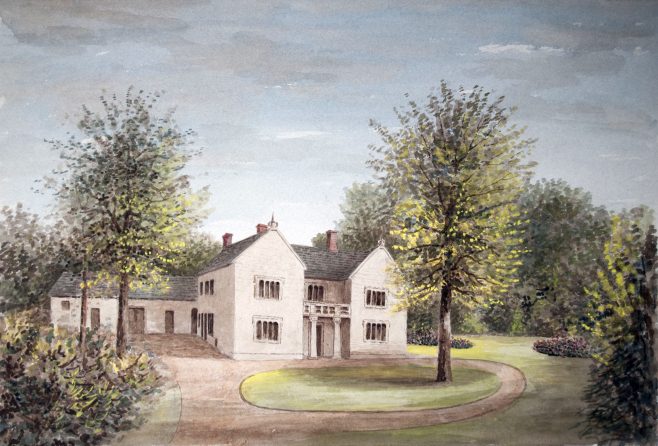 The Laws House was built in a pyghtle of Grove Farm between 1836 and 1840. The three-acre plot was owned by John Higgins of Turvey Abbey and in the Turvey Abbey Scrapbook he provides a detailed account of its construction. It is not clear as to why the house was built as no Higgins or Longuet Higgins ever lived in it. Over the years the land to the north has been sold off for housing development but it is still a substantial building. In its time it has been a pub, a hotel (with a rather good restaurant), a residential conference centre and back to use as a residence. In the 1960’s land to the north was sold to create a residential development known as ‘The Pyghtle’.

We now move to our final stop 16, The Rectory and Lancelot’s Piece.

Location
My location
Get Directions
High Street Northern Side