The Turvey sign seen here was erected in 1951 to celebrate the Festival of Britain. We met the little stream called Ladybrook on the other side of the A428. It runs from Pict’s Hill across Jack’s Lane to Newton Lane before turning wast to flow into the Great Ouse.. This little brook acted as Turvey’s open sewer until public sewers were laid in the late 1950’s. Whilst the larger houses had septic tanks, the rest of the village had earth closets or privies at the far end of the garden and chamber pots at night. 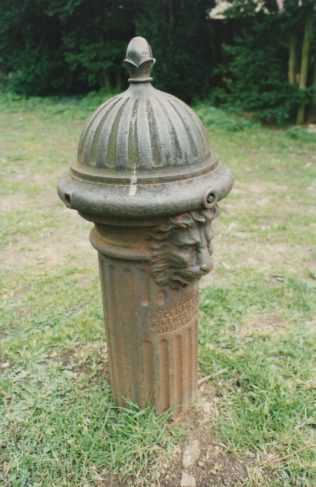 At one time villagers drew their water from the many wells in the village. Some had a bucket and chain and a windlass, some had hand pumps over their sinks and others used parish pumps such as Nell’s Well. In the 1930’s the public water supply reached Turvey and a number of cast iron parish pumps were installed by the roadside, many of which can still be seen. On turning a handle, water would spout out of the lion’s mouth. Mains water did not reach Turvey until the late 1950’s. 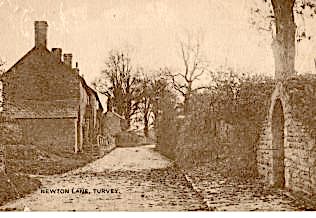 On the left of this corner there once stood the premises of the main village Blacksmith’s or Smithy, later to become the workshop of Len Savage, who’s memoirs can be found in the Cameron Collection in the archives nf this website. Further down the lane a toll house once stood, approximately opposite to Nell’s Well. Next, we come to Bank Cottage, the core of which was built in the 1600’s although it has undergone considerable development since then.

A sign on the next set of buildings indicated that the first house was a lace school. Lacemaking was a very common occupation of the females of the village, essential to bring in extra income to the home. Children as young as four or five would learn the trade at these schools, but little else. They were not treated well. Hands had to be kept very clean and hair in tight plaits so as not to be caught in the lace. The girls generally worked a twelve hour day and were frequently slapped or had their noses rubbed on the lace pins if they made a mistake. The resulting lace was sold to tallymen lace dealers. The plight of the lacemakers is explored in the play “Bells of Turvey”. 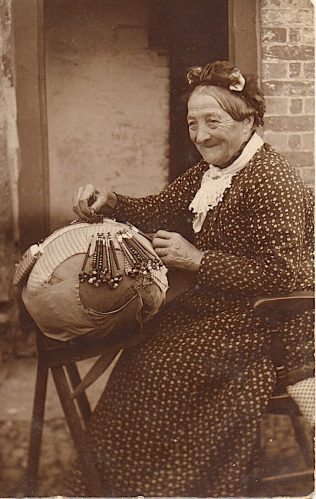 The need to bring money into the home meant that young girls were sent to the lace schools rather than the National Schools in the village. An Inspectors report as late as 1870 reported that no girls attended school because of the lace schools. Demand for lace began to fall in the 1880’s and the 1870 Education Act requiring girls to attend school saw the beginnings of a more general education for girls in the village.

St Andrew is the Patron Saint of the Midland Lace Makers, and gives his name to Tanders Day on 30th November, a holiday for lacemakers and quite a raucous one through drinking ‘metheglin’, a potent mead. Tander’s Day was also the birthday of Charles Longuet Higgins (1806-1885) and he sent figs to everyone in the village by way of celebration.

There is a private road at the end of Newton Lane which forms part of the Turvey House Estate. Down this road and to the right one would have found Turvey Old Hall, the Turvey home of the Mordaunts. It has since been demolished and much of the building material was used to build the current Hall Farm.

Continuing up Newton Lane we come to the modern development of Baker’s Close. This was once a quarry and produced the “golden stone” that was used for many of the buildings in the village. When the railway was being built through Turvey, five huts were erected in this field to accommodate men working on the railway. When quarrying came to an end the area was used as a rubbish dump, commonly known as the ‘Turvey Tip’. The area was developed into housing between 1999 and 2000. 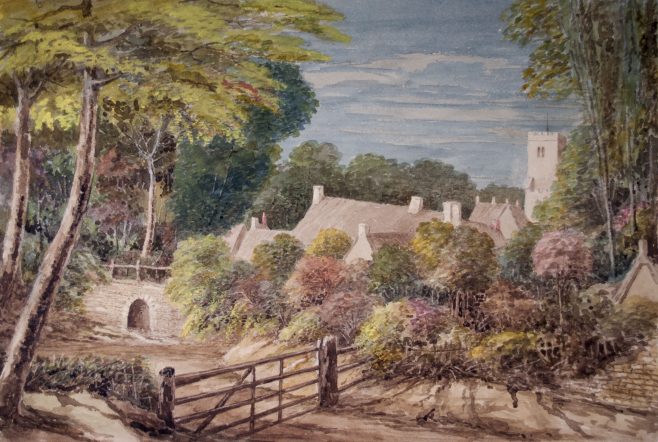 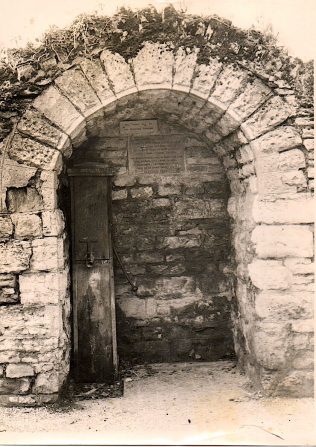 Nell’s Well prior to refurbishment

Nell’s Well is one of the best known monuments of Turvey, although it is not a listed site. There is no doubt that a well has existed here for a great many years. The fact that the well is called Nell’s and the sign of the former Tinkers Inn refers to a Nell has led people to link the two together. Unfortunately, there is nothing other than the name to establish such a link.

When mains water was introduced to the village many villagers continued to use the wells and parish pumps claiming that the water from the mains was far inferior in taste. Malcolm Church remembers how Nell’s Well supplied his family with water.

In 1808 a Dr Yeats analysed the water in Nell’s Well and stated “the water at Turvey contains a very large proportion of lime held in solution by a superabundance of carbonic acid”.

In 1873, Colonel Higgins of Pictshill House paid for the stone arch to be repaired  together with the pious verse

O fountain pure, whose spring so sure
Has never yet run dry
Thy water tells if deeper wells
Which living streams supply
Thy spring though pure, no thirst can cure
Who drinks, will drink in vain
Go neighbour, try that deep supply
Thou ne’er shall thirst again. 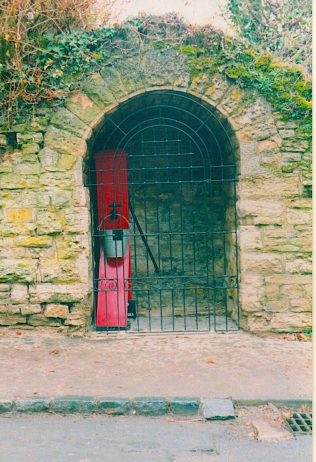 There was uproar in 1960 when the Rural District Council declared the water unfit to drink. Petitions were signed and Fyfe Robertson from the “Tonight” television programme reported on the controversy. The well fell into disrepair until Len Savage, fed up with tripping over bits of old pump from the well in his shed, suggested to Barry Parker, Chairman of the Parish Council, that the well should be restored. This was readily accepted and an iron gate was put in place to protect the site. On 4th December 2004, the restored well was commemorated by Len who had also seen its closure.

We will now move on to stop 9, the Green.