My location
Get Directions
Village Hall 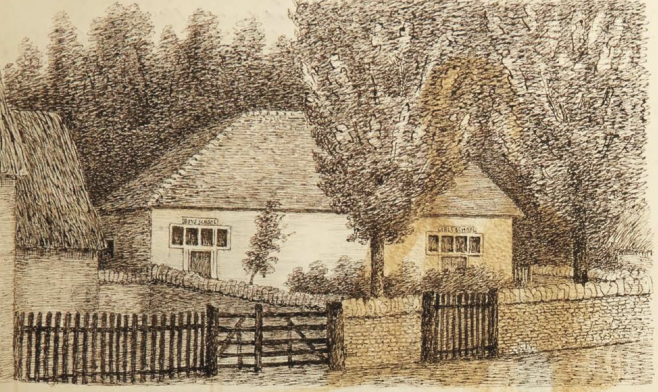 The image above, taken from the Turvey Abbey Scrapbook, is of first purpose built school in Turvey,  erected on Abbey Square in 1815. Two Lace Schools also existed but these were essentially a gathering in a particular cottage where lace making and nothing else was taught.

This school would eventually be demolished and from 1832 to 1847 Turvey’s Education Hub was created consisting of infants schools where Turvey Court new exists, a reading room where the pre-school playgroup new operates, a museum, now the Manor Room and a National School, now the village hall.

By the early 1840s it was apparent that the original School could no longer cope with demand and an infants school was erected in 1841 on land east  to the what is now the Central Stores but then the Tinkers Inn. By 1856 it was apparent that this  small infant school could not cope with demand.   Charles Longuet Higgins provided some additional land on which stood three cottages; these  were duly demolished and the school and master’s house built on what is now Turvey Court. In Turvey Court one of the houses is named “The Little School House” and this gives a clue as to the former use of this set of buildings. 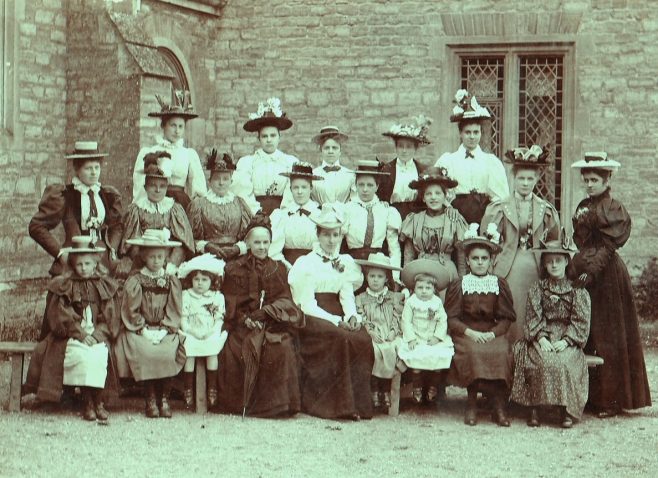 Phil Burley of Burley’s Butchers remembers his early days at the Infant School:

Charles had one of his favourite Proverbs (9:10) carved in stone and attached to the building: “The fear of The Lord is the beginning of wisdom”. Unfortunately, when the infant school closed in 1983 and the infant school moved to May Road, the buildings were converted to residential properties. The builders removed and broke up the sign. 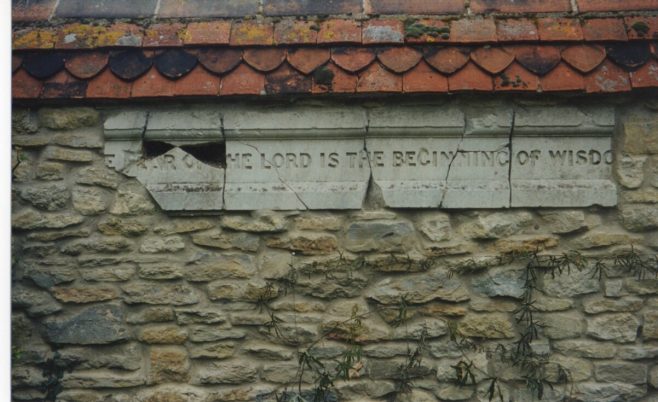 The Fear of the Lord is the Beginning of Wisdom 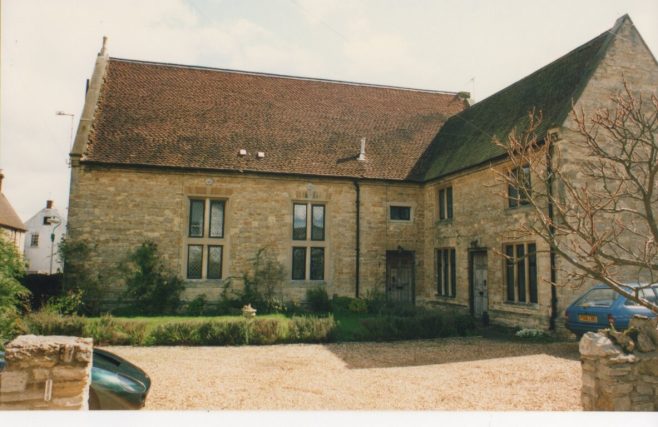 The Roman numerals on the side wall of the Village Hall clearly show that this building was constructed in 1847. As with many buildings of this time it was constructed to a high standard with stone from the Baker’s Close Quarry. Part of the stone ledge below the Roman numerals has been worn away by the feet of young boys  who had a game  involving standing on the ledge, as Dave Hilson, a long time resident of Turvey, remembers.

The school was purpose-built to replace the old Senior school, built in Abbey Square in 1815. Finance came from public funds, grants and £ 400 from Thomas Charles Higgins of Turvey House. The school opened in 1848 as a mixed National School and remained a school until 1947. Initially, the school took children from the age of 7 and later from the age of 11 to 14 years. Before the Second World War the brightest 11-year olds would sit a Scholarship Exam and, if successful, receive free education at Bedford Modern School or Dame Alice School in Bedford. The scheme was taken over by the Local Education Authority after the war.

At the outbreak of the Second World War, the Government introduced an evacuee scheme whereby children living in areas likely to be bombed were moved to the countryside. The St John the Evangelist Roman Catholic School from Islington in London was transferred to Turvey, consisting of 53 infant pupils and 78 junior/seniors. The building which is now the Village Hall became their schoolrooms. The influx of 131 children into any village the size of Turvey would have made an impact, but what shocked villagers most was the poor state of health, clothing and general well-being of these youngsters. They had understood what poverty meant for children in the countryside but were completely unaware of the deprivation to be found in areas such as Islington as Dave Hilson remembers:

The village showed great compassion to these children, although for many adults looking after these children was a great strain. Needless to say, the new arrivals received a mixed reception from the village children.

The Autumn and Winter of 1939 became known as the phony war, with no bombing of cities taking place.  Many of the evacuee children found village life difficult and, parents wanted their children home and so many drifted back to London. St John the Evangelist School in Turvey closed in November 1939.

As well as operating as a school, the hall was also used for village meetings and events. The first request was made in 1907, to have an evening dance school. This was rejected as being ‘not the sort of thing that should be encouraged’. The decision was soon overturned and the dance classes went ahead. Th most famous occasion regarding the use of the school hall probably took place on Tuesday 29th April 1958 when the hall was packed with villagers who had come to participate in their favourite radio programme ‘ Have a Go’ hosted by Wilfred Pickles and his wife, Mabel. 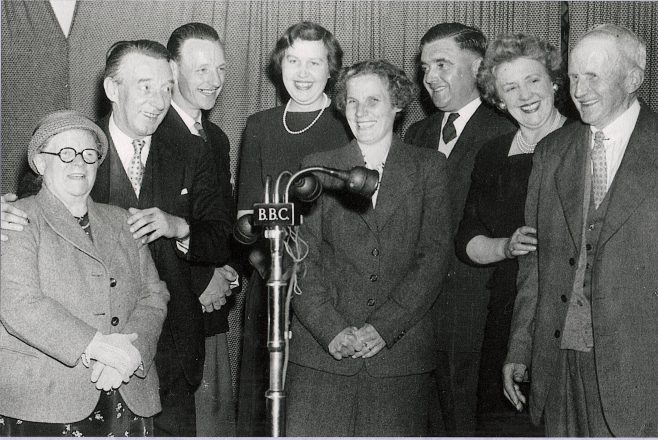 Wilfred Pickles with contestants from Have-A-Go

In 1832, John Higgins had a Reading Room (now used by Pre-School Playgroup) and a Museum (now the Manor Room)  built. The former was opened in 1833 and established as a library both for the School and for male residents of the village. Daily papers were provided and books could be taken out on loan. Charles Longuet Higgins would, in later years, also provide educational lectures in the Reading Room, covering subjects as diverse as English History, the Solar System and his travels to the Holy Land. He  illustrated his very popular talks talks with magic lantern slides

Charles had originally wanted to create a library for the use of the Clergy, but this never materialised. Charles had been an avid collector from a very young age, having created his own museum in a room at Turvey Abbey. The Manor Room did become a museum and remained as such until 1953. Although Charles’ museum contained geological materials, natural history specimens and items drawn from his overseas excursions and purchases, he was one of the first people to advocate the establishment of local history museums, aimed at capturing the heritage of the locality.

In 1953, the Reverend Henry Hugh Longuet Higgins, grandson of Charles and now living in Liverpool decided to sell the Reading Room and Manor Room for £ 800 and offered first refusal to the village, in the form of the Parish Council. At the same time the St Albans Diocesan Board, who owned the School and Schoolhouse, wanted to sell these for £ 1850 and also offered the village first refusal. Whilst some funding had been secured there was only enough for the purchase of one building. After considerable debate, at the meeting on 10th April 1953 it was decided to purchase the School and create a Village Hall. The first meeting of the Village Hall Committee took place on 29th January 1962 and in August of that year Derek Cockings was appointed caretaker and moved into the Old School House. The formal transfer took place on 17th October 1962 when Mrs Allen, on behalf of the Turvey Hall Committee and Percy William Tongue representing the Diocesan formally signed the transfer agreement.

Whilst on the theme of education, mention should be made of the Turvey Reformatory, which existed on the land now owned by Emmaus in Carlton but which was once called Northey and part of Turvey. In 1857 Thomas Charles Higgins of Turvey House created a Reformatory for between 60 and 70 boys up to the age of 16, who would otherwise have been sent to prison. Whilst the published aims of the reformatory stated the purpose as “Industrial Training of Juvenile offenders” essentially the programme offered was that of “farm studies”. The Reformatory grew and boys from all over the country were sent there. In 1933 under Government reform it became an “Approved School” for young boys. The School closed in 1973 becoming a community home with education facilities and then a training and conference centre before being taken over by Emmaus in 2000.

We will now move on to Stop 11, the Central Stores.