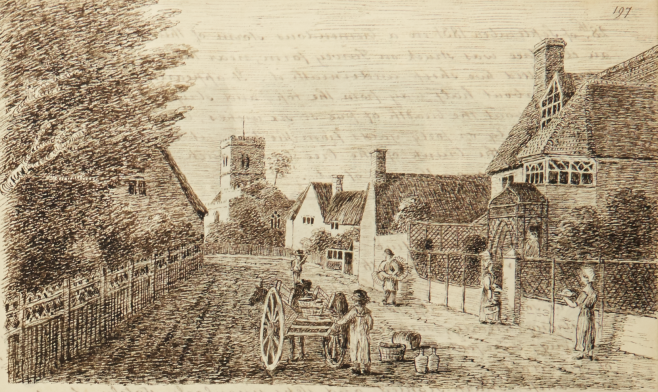 The image on the right, taken from page 197 of the Turvey Abbey Scrap Book shows the Old Rectory. The building has a large glass balcony called The ‘Gazebo’. This building was demolished and the present Rectory built in 1839 with a gift of £ 1000 from Miss Anna Maria Higgins of Turvey House. The Higgins family crest may be seen underneath the southwest gable. The house has a peculiar mixture of styles with many people believing the building to be Elizabethan due to the magnificent chimneys. Each is a unique representation of the brickmaker’s craft, being of different styles and topped with castellations. The side of the Rectory has a mural of figures, possibly saints, marked in the brickwork. The intricate gables and beautiful windows clearly reflect the considerable expense of the building and its statement of wealth. 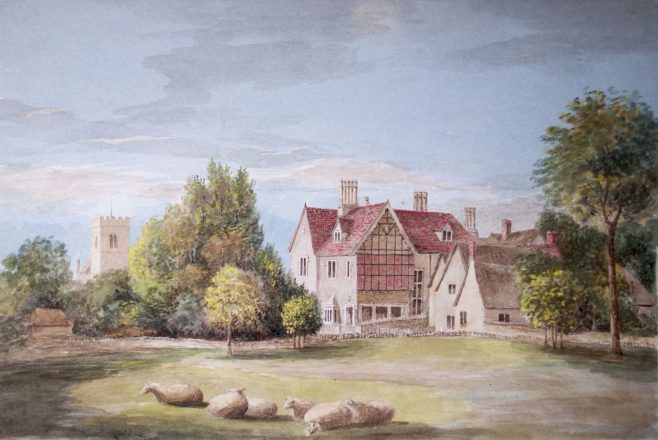 An article in Turvey News suggests that the owl in the Alcove (gedit?) was put there by another Rector, Guy Beech in the 1920s or 30s to celebrate the birth of a child. Beech was a great owl enthusiast and even kept a live owl in the rectory. Watercolours by John Higgins, painted at the time the Rectory was built show a similar alcove although it is not possible to identify the actual statuette. There may have been a religious artefact originally and Beech inserted the owl as a replacement when he restored the alcove, or perhaps the owl was there from the start. 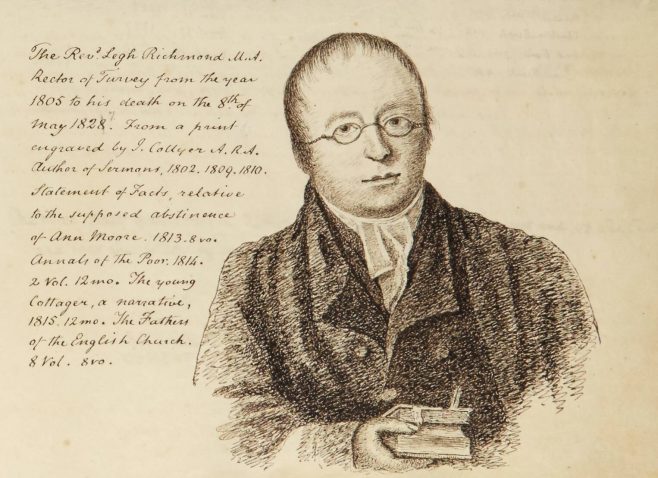 Turvey’s most famous Rector, Legh Richmond (1772 – 1827), lived in the Old Rectory. He was said to have a large telescope in the gazebo so that he could observe the village.

He came to Turvey in 1805, where he remained until his death. There are few parishes that can boast an internationally famous author as their Rector. As well as a prolific letter writer Richmond wrote a number of stories, the most famous of which was The Dairyman’s Daughter. Written in Turvey, the book describes the life and religious conversion of a young woman and captures the ethos of the times. The publication  had many reprints and by 1849, some four million copies had been published in 19 languages.

Richmond was a charismatic, evangelical preacher who attracted people to his services from far and wide. Horse drawn carriages would be parked along the High Street by the Tinkers Inn. He also preached across the country for the Church Missionary Society and the Society for promoting Christianity among the Jews. A great supporter of the poor, he was one of the first to establish a Village Friendly Society, providing wages for the sick or poor who could not work. He was also a great supporter of education of the poor and was at the forefront in establishing a day school in the village in 1815, raising funds from friends and organisations near and far.

The first incumbent of the new rectory was the Revd. John Webster Hawksley who had the unenviable task of following Legh Richmond in 1827. Hawksley remained the Rector until his death in 1856. Turvey had Rectors because of the Advowson. This gave the owner of the Advowson the right to appoint the clergy in the village and also to pay their wages. The Advowson could be bought and sold or inherited. In former times it was used to ensure that the correct message was being conveyed to the villagers! 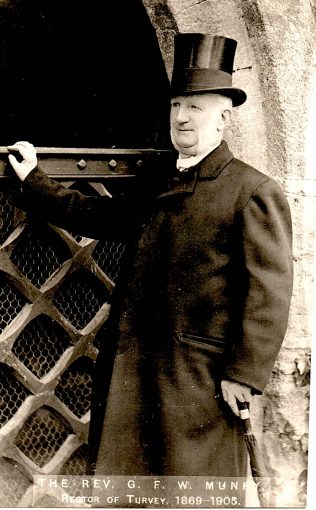 Another well known Rector was Revd. George Frederick Woodhouse Munby (1833 – 1911). Born in York, he was Rector of Turvey for 35 years from 1869 to 1905. Together with Thomas Wright of Olney he wrote a popular history of the village, “Turvey and the Mordaunts with some account of Legh Richmond”. Following his retirement, he published a very readable book of his time in Turvey, “Former Days at Turvey”.

A more recent and much-loved Rector was, like many of his predecessors, a long-time resident of the village. The Revd. Peter Jeffery (1938 -2019) was Rector from 1969 to 1998, arriving from a Birmingham City Parish with his housekeeper Rene and her husband Eric. There was some concern as to whether a single man from a city was the appropriate choice for a rural village, but such concerns quickly disappeared with his easy-going manner and ability to communicate with all generations. He become a major figure in the community with his love of simple country pursuits, sailing, fishing, the church choir, his dog and, of course, his donkey, Lancelot. 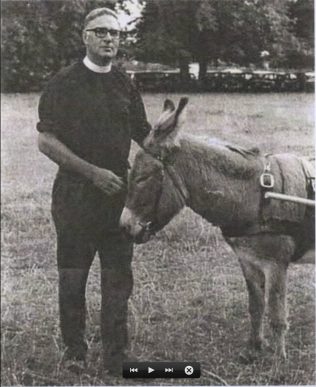 The Rector walking his donkey with his dog at his side was a common and welcome sight in the village. Lancelot would also be on hand to offer rides at the Church Fetes.

Lancelot’s Piece is named after the donkey as it was on this plot of land that Lancelot was stabled. A competition was held in the village in 2000 as to what to call this piece of land with Rod Petty putting forward the winning idea. The plot of land is one of the two bits of Turvey now owned by the Longuet Higgins family, along with Sam’s Island near Turvey Bridge.

Time for a rest!

We hope you have enjoyed this introduction to the heritage of our beautiful village and will want to learn more from other parts of the website and by visiting the village.

Location
My location
Get Directions
The Rectory