Stop 07. Ye Three Fyshes and Southern side of Bridge Street. 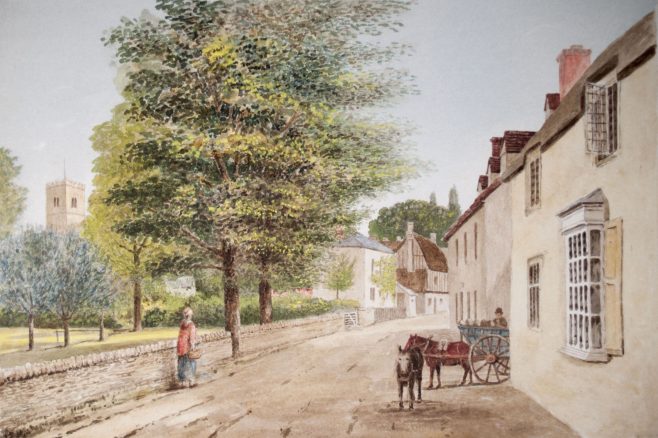 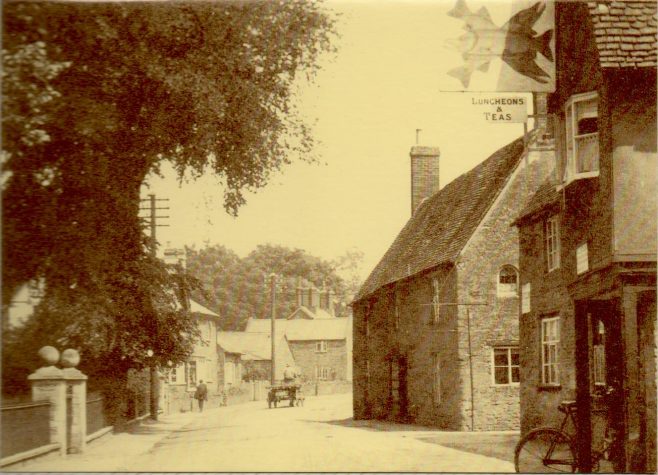 Before we come to Ye Three Fyshes there is a plot of land, owned by the Parish Council, that leads down to the river. At one time it would have been common to see horse and carts backing down to the river to wet the wheels of the carts. This was done to prevent the cart wheels, which are made of wood, from drying out, causing the wood to shrink and the joints to come loose or the metal rim to become detached. 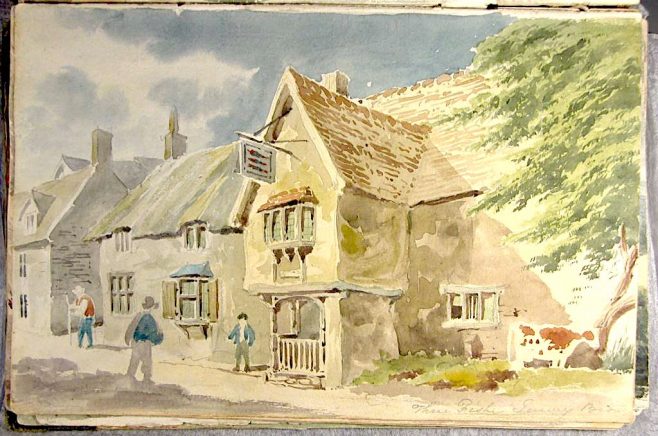 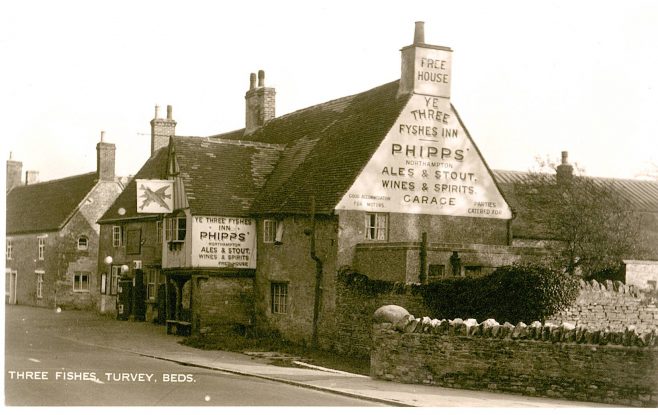 Ye Three Fishes has signage that suggests it was built in 1624. However, given its prime location it has been suggested that the present building was built on top of a demolished pub that was built in 1487. Many past landlords of the Fishes brewed their own beer. The pub has a stream running through the brew room, ideal for keeping the beer cool but this also meant it would be the first place in the village to flood. 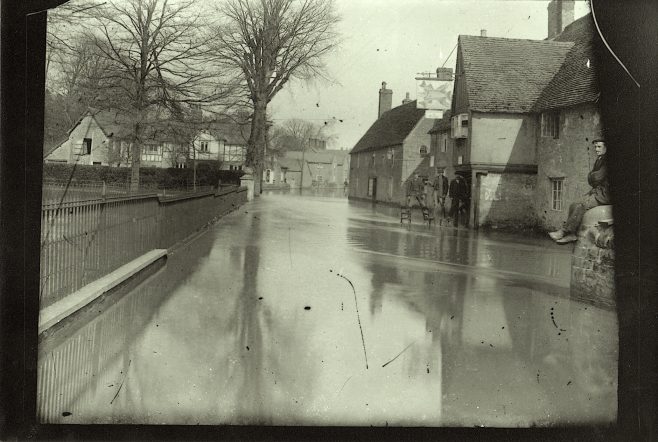 The pub was originally owned by the Mordaunts but in 1786 ownership was transferred to the Higgins family and the Turvey House Estate. Landlords would rent the pub from them, as was the case with Frank Collins in the 1920’s. He also rented land called Tander’s Close (later Tandy’s) which he used as a farm and also, in the 1950s, sold petrol. Later he would create a garage and transport service. Turvey Motors in Mill Lane is still owned by the Collins family. 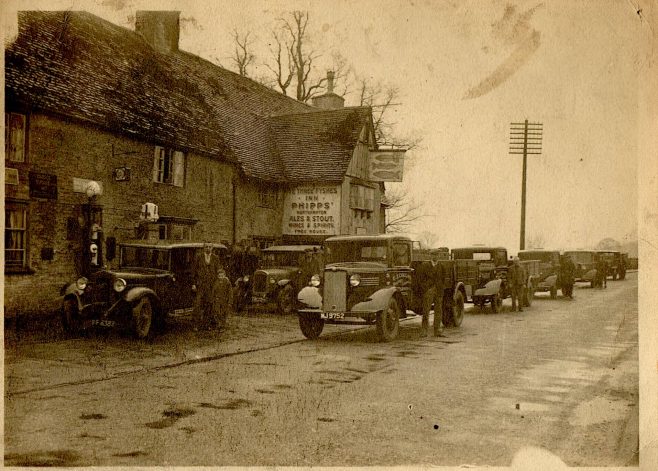 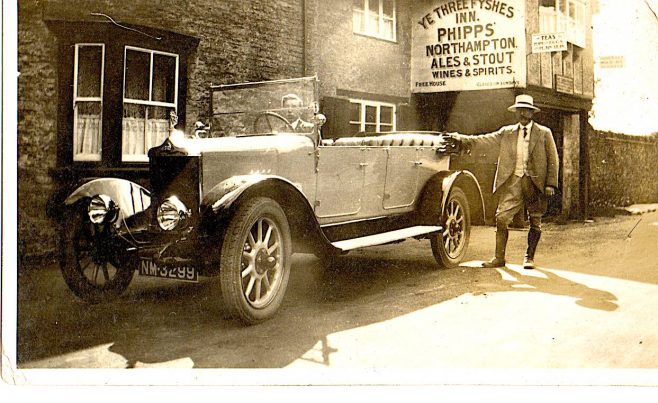 Frank Collins with his Father Tommy and his Standard Eleven ‘Warwick’ Tourer.

Turvey was well known locally as a good fishing spot and many people, particularly from Northampton, would come to Turvey for fishing holidays. Some would spend a week fishing, camping on Baker’s Close. In the 1930’s, two families from Northampton, built two wooden chalets on what is now the Ye Three Fyshes car park to live in during their frequent visits to Turvey. There were good fish in the river. The Mill proved a big attraction to the fish and eels who would feed on spare corn and waste from the food manufacturers, particularly Cristo Crisps as Malcolm Church remembers:

In recent years the quality of the river for fishing has dramatically reduced, partly due to the run off from chemicals used in farming and also because of the arrival of American crayfish and otters. 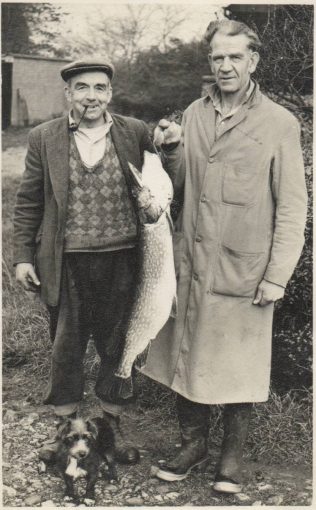 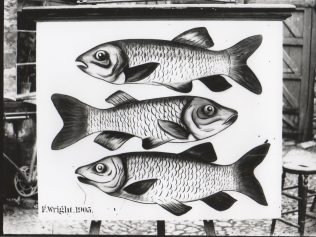 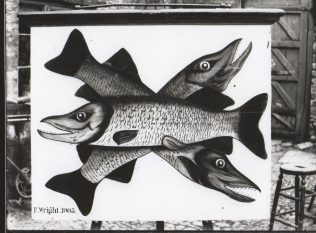 This corner of Mill Lane was known as

“Wright” after the family business stationed here. They were carpenters and sign makers, later expanding to sell paint and wallpaper. They supplied Ye Three Fyshes with their signs. At the bottom of Mill Lane is Mill Green and on the right are some old cottages built in the 1700’s. One of the cottages has an apotropaic mark made into the side of the house. Commonly known as witches’ circles, these were made to ward off evil spirits and witches.

Returning now to Bridge Street, the houses on this side of the Street had “hanging rights”. Many women of the village laundered for the larger houses and Monday was wash day when they were allowed to hang their washing on fences or lines erected on Tandy’s Close.

Two thatched cottages once stood where Ye Three Fyshes car park is now located. They were owned by William Bamford, they became derelict and were demolished in the 1930’s, at which point they were  the last thatched houses in Turvey. The redevelopment of the village in the mid 1850’s saw most of the thatched properties demolished. 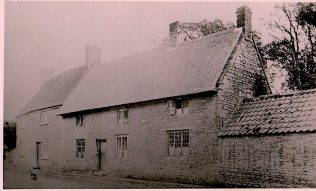 Ladybridge Terrace is one of the set of houses built by Charles Longuet Higgins in the mid 1850s. It is believed that the name Ladybridge comes from the chapel that once existed on the bridge. Notice the long gardens, created so that the owners could grow their own fruit and vegetables.