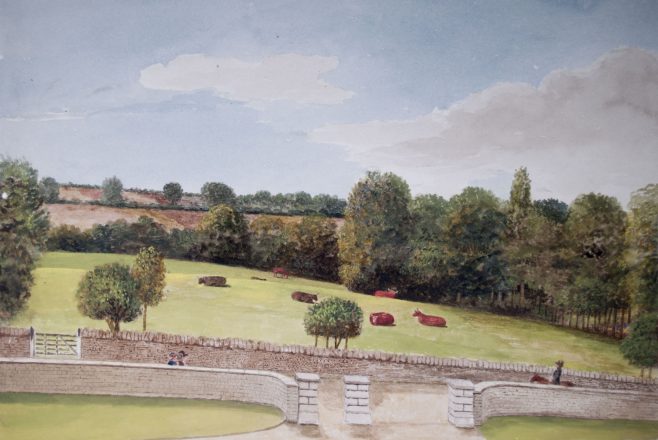 View from The Laws House of ‘The Laws’ now ‘The Green’.. Watercolour by John Higgins © J Longuet Higgins

The houses now seen on The Green were built between 1954 and 1956 to house the senior engineers who were working on the building of the M1 motorway.

A field called ‘Hlaws’ once occupied this area, it stretched from the back of the Church Terrace cottages in the north to well down Newton Lane to the South and from Newton Lane in the west to the Central Stores in the East.

It was in this field that the Manor Courts were held by the Lord of the Manor or more likely his Steward. The field eventually came to be known as Law’s Piece and gave its name to The Laws residence. In 1830 John Higgins of Turvey House allowed 9 acres on the southern part of the land to be used for allotments. Forty-five plots were allocated by lots with an annual rent of 10s 6d (52.5p) The area became known as Garden Fields.

The Village Hall, Manor Room and Reading room were built on Laws Piece which also acted as a playground when the Village Hall was a school. The field was then sliced through for the building of the “Turvey By-Pass” in 1936.

The outline of the soldier by the side of the A428 is a modern day remembrance of the great wars. Purchased by the Parish Council, the theme is “There but not there”. 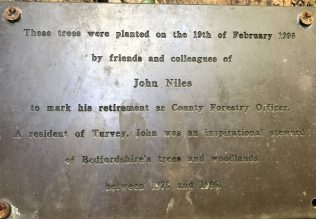 Across the A428 road there is a roundel (a circular planting ) and if you search hard enough you will find a plaque. The roundel was planted on the 19th February c1996 to commemorate the retirement of John Niles, who lived in the village and was the Principal Forestry Officer for Bedfordshire County Council.

The daffodils that appear in early spring were planted by members of the former Turvey Gardening Club and Turvey Bloomers.

Location
My location
Get Directions
The Green