You are here: HomenextTopicsnextPeoplenextJoseph Bell 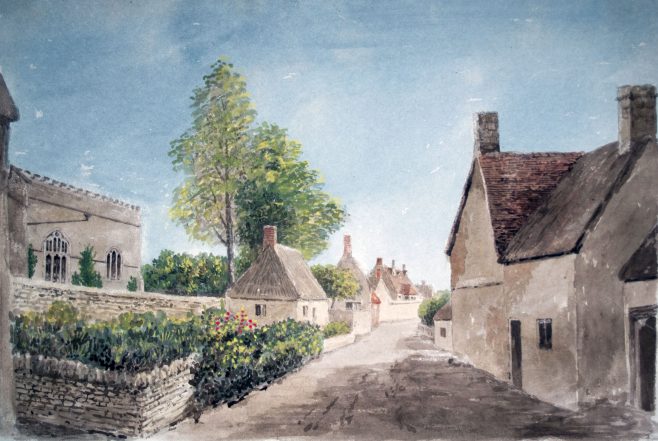 The cottage where the Bell family lived is immediately South of the church. The cottages in this area were demolished in the 1840s or 1850s, considered unfit for human habitation. Watercolour by John Higgins, c. 1830s, © Rev. John Longuet Higgins.

Joseph was born in Hog’s Lane in Turvey in 1846. His family probably lived in the house on the left of the above picture. At the age of twelve he left Turvey in tragic circumstances. In 1926, at the age of 80, he decided to record his memories of life in the village. These memories formed the central narrative of the play ‘Bells of Turvey’, performed in the village hall in November 2017. The play was written by Poppy Hollman, with music by Tim Brewster.

You can read his full memoirs in the Bedfordshire Archives; his memories of Turvey in the 1850s are featured elsewhere on this website. 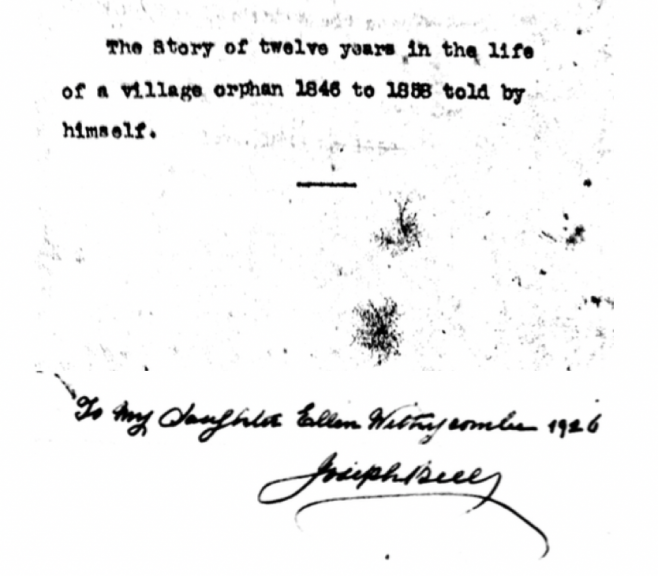 Joseph had three older sisters, Sarah, Mary and Betsy; a brother, Henry, died as a child. At the time of Joseph’s birth, his father William Bell was gardener to the Reverend of All Saints church; the family lived in a ‘tied’ cottage (belonging to his employer) up against the church wall, where the driveway to Turvey House now runs.

Just six months after Joseph was born, William died. As well as being a personal tragedy for the family, it set in chain a cycle of poverty which Phoebe, Joseph’s mother, would endure for the rest of her life. Without a main wage earner (and William’s wage, as a skilled gardener, would have been better than that of many villagers) she and her daughters were forced to scrape by on their meagre earnings from lacemaking. The family had to leave their tied cottage and depend on the charity of the Higgins family (both Thomas Charles Higgins of Turvey House and Charles Longuet Higgins of Turvey Abbey) for their immediate survival.

Joseph started work at the age of seven, taking on various jobs but mostly the physically demanding work of harsh farm ‘gangs’, where boys were often beaten and bullied. There were better times: he fondly remembers a season picking walnuts for Mr Thomas Charles Higgins; and a ‘light job’ helping Mrs Wooding at Turvey Lodge House, arranged by Mr Higgins in order to ensure there was at least one decent wage to support his ailing mother. Mrs Wooding was instructed to ‘feed up’ Joseph when he was at work to make up for the hunger he faced when at home.

Joseph’s sister Mary was a very talented lacemaker. This meant she could command more for her work than some others, but it also meant she was prey to the attentions of the notorious ‘Tallyman’ lace dealer. Joseph tells of the time when, desperate for money, he went with Mary to Olney to sell some lace, even though it had been privately commissioned by the dealer. It was obviously very risky to do so. 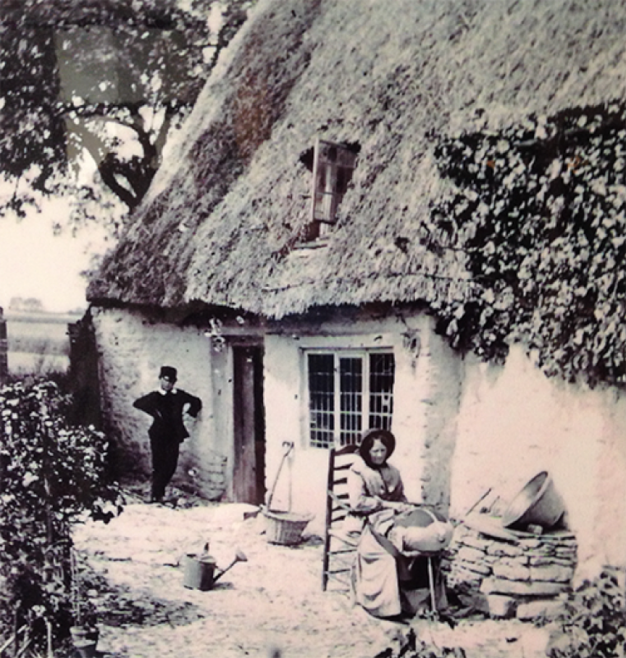 A lacemaker at work outside her cottage. With permission of the Cowper Museum.

Mr Charles Longuet Higgins took an interest in Mary too, arranging for her to be interviewed for a job at the Three Counties Asylum in Bedford, where he was Chairman of the Board. But the interview panel felt Mary was to weak to undertake the work involved. Thinking on her feet, Mary suggested her older sister Sarah for the job, and Sarah was duly appointed. Her wage made a considerable difference to the family fortunes.

Betsy, Joseph’s youngest sister, didn’t take to lacemaking. But she was clearly very bright and helped the schoolmistress at the school, as well as being the writer and reader of many of the villagers’ letters:

as not many people [in the village] could read or write she used to read and answer their letters, both for young men as well as women. She therefore knew all the love affairs and other matters of the whole village. Though she did not bring much into the Family Exchequer she did not cost much to keep, but did much to enliven the house with village gossip. She was a general favourite.

Joseph speaks with much affection about his mother, who, despite grinding poverty and punishing work, did her best to raise her children with strict morals and a willingness to work hard. But her health was never good, and in 1858, when Joseph was twelve, she died. Joseph writes:

My angel mother passed away after heroically struggling for twelve years. Struggling alone to feed me, clothe me and to shape my character. She was never tired of telling me of my father’s many virtues, of his noble character, of his unselfishness, of his great consideration, holding up the mirror of his life that I might see myself reflected therein.

After Phoebe’s death the family was separated and Joseph was sent to the Bedford Union Workhouse. Entry into the workhouse was seen as shameful, and it was a tough existence even for children, who weren’t forced to endure the same backbreaking labour as adults. But Joseph quickly won the other children and the masters over: the former by his willingness to scrap with the bigger boys and prove his worth; the latter by his knowledge of country lore. He would take the town boys out for nature walks and impress them with his knowledge. He even persuaded the workhouse master to allow them to dig up a strip of playground in order to grow flowers and vegetables. You can take the boy out of the village…

Years later something prompted Joseph to write down his memories of Turvey and his eighteen months in the workhouse. He wanted to pass on details about his early life to his children. By this point he had made a success of his life as a shoemaker (the trade he learnt in the workhouse) and was a prominent member of his local chamber of commerce. He was able to give his own children the education he himself had sorely missed. In his memoirs he writes with great detail about many events and although he would have relied upon the memories of his eldest sister Sarah to bolster his own, for some reason those early days in Turvey had stayed with him. The world had changed in unimaginable ways since his childhood. People were no longer absolutely fixed in poverty; conveniences such as greater food availability and travel had made life easier. The Great War had rent a hole in society which made it impossible to bring back Victorian values.

So partly Joseph was writing to make sense of the great changes that had happened in his lifetime. But he was also writing because something about Turvey had made its mark on him. It was the only place where he had known his mother; the place he associated with secure and happy (albeit poor) family life. After Turvey he was on his own. But the landscape and wildlife of Turvey – the willow trees by the river, the bird songs which he knew by heart, the crow which he tamed and taught to talk, the medicinal properties of wildflowers, the bracing water of the mill pond and Jonah – all these were things which he carried through his life like an identity badge; they gave him a sense of belonging somewhere.