You are here: HomenextTopicsnextPeoplenextBartram Family Memories of WW2 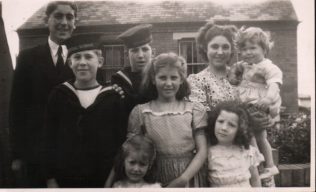 zoom
The Bartram children in 1948/9. Tom's niece is the youngest. Edna and Bill had one further child. 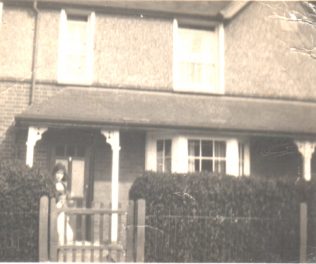 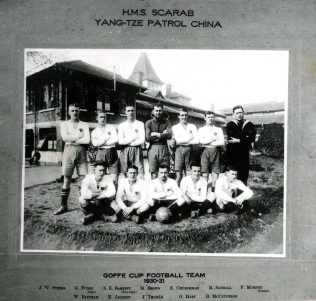 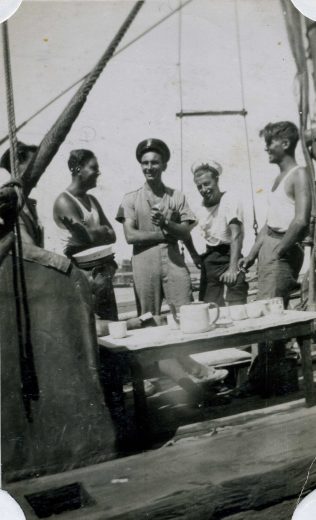 zoom
Shipmates of Bill Bartram (second on the left) on board HMD Victoria 1. Dated 1941

Parachute Mine in a Turvey tree during WW2

Travelling by bus to and from Bedford can be surprisingly interesting.  On mentioning Turvey as my destination, the passenger next to me told about her mother’s and father’s WW2 memories.  She promised corroboration from her uncle, Tom Tompkins, once she had interviewed him for this article.  In our first conversation, we began talking about the Turvey stories told by her mother and her uncle, from before her birth in 1948.  Tom Tompkins (born 1924) told his niece of his childhood memory of Turvey Bridge as “the place where old Noah lived”.  Her mother with her “first batch of five children” moved to Turvey under the prompting of her husband, Bill Bartram DSM, who feared bombs falling on their Bedford home.  He was overseas in the Royal Navy for much of the war and wanted his family to be safe.

From the records and photos, they lived in No. 2 Norfolk Road, except that they called it Norfolk Street at the time.  She remembers them talking about Mays Lane which was not a made-up road.  Tom Tompkins (interviewed by his niece for this article on 23 February 2019) remembers Mays Lane during the second world war.  His niece was part of a second group of four children born after the war, so has no personal memories of Turvey.  She remembers her mother, Edna May Bartram (maiden name Tompkins), telling the story to her “I heard aircraft flying over and as I looked out of the back window, I saw that a bomb was dropped by parachute.  I got all the children together and we crouched under the dining table and waited for the explosion.  It never came.  Eventually I crept out and looked out of the window, and saw to my horror, the bomb hanging by its parachute, from the large tree at the bottom of the garden”.  The children were Alan, Mary, Gillian, John and Paul.  Edna did not explain how the bomb was removed.

Parachute Mines (called land mines by the Home Guard and Civil Defence committee members) were effectively blast bombs dropped from Heinkel III bombers.  They were magnetic mines made from aluminium, each with a parachute housing containing a green or red parachute.  They drifted down to ground level, detonating either by contact, a disruption to the magnetic device or by a clockwork mechanism.  When the parachute caught on buildings, the mines could fail to explode, leaving those who had to face defusing them with the uncertainty that there might also be a clockwork timer operating.  In residential areas the above ground blast was capable of demolishing whole streets.  Bomb disposal required bronze anti-magnetic tools.

Wartime gossip and returning to Bedford

Edna also caused a great deal of gossip after one war-time visit by husband Bill.  Tom Tompkins’ niece was told “When dad came home on leave in winter, he wore his Petty Officer uniform, which included a black peaked cap.  After he returned to his ship, the village was full of gossip about my mother being seen out with a bus conductor.”  Naval colleagues would have told him his promotion gained him a “cardboard fo’c’s’le” because of the peak. After the war, they moved back to Bedford to live in Clapham Road, the site is now occupied by Sainsbury’s and Aldi .

The citation reads “BARTRAM William George, C/KX99523 for bravery and endurance while minesweeping, and when attacked by enemy aircraft” when serving on HMD Victoria 1.

Bill Bartram entered the Royal Navy on 17 August 1923.  In 1923 and 1924 he served aboard the light cruiser HMS Castor.  From 15 May, he was Stoker 2nd Class aboard the light cruiser HMS Calliope,  was promoted to Stoker 1st Class on 19 August and served until 28 April 1925.  He transferred to the New Zealand Navy to the base ship Philomel at Auckland then the RNZN Wakatura.  He returned to the Royal Navy in Chatham on 23 November, where he stayed until 8 February 1929.  From 1929 until 1933 he served aboard the river gunboat HMS Scarab with the Yangtse River Patrol.

In July 1939, he joined HMS Calypso, which was sunk in June 1940.  He was serving on HMD Victoria I in 1941 .  This was a requisitioned drifter (His Majesty’s Drifter) which like several hundred civilian craft had been requisitioned at the start of the war to carry out minesweeping and coastal defence in advance of the Navy building its own fleet.  These drifters were usually manned by their original crews, with a small number of assigned regular Royal Navy staff for specialist duties such as signalling and gun crew.   The crews of the drifters could be signed up in the Royal Navy under the special category of “hostilities-only” with a rank equivalent to their previous civilian duty.  They had some non-standard ranks such as Skipper.  As the war progressed, the crews were increasingly Royal Navy hostilities-only ratings.  These drifters and trawlers were part of the Royal Navy Patrol Service Association based in Lowestoft.  The RNPSA committee members issue a regular newsletter to keep people in contact with one another.  There is a museum in Lowestoft.

The source of this naval warfare information, John Reddyhoff , using his reference books and internet sources while carrying out research for me, pointed out that for the fishermen “this was merely a change from trawling for fish to trawling for mines”.  Requisitioned craft were usually returned to the civilian owners when the shipyards built the navy’s own fleet of minesweepers and coastal defence vessels.  John commented that he found the record of the sinking of a Drifter Victoria 1 on 25 March 1942 “sunk by enemy action in international waters, location unknown”.  In 1943 Bill Bartram was transferred to the minesweeper HMS Gozo, when she was equipped at the Toronto Shipbuilding Yard in Toronto, Canada.

Tom Tompkins’ niece explained “My father was awarded the DSM, whilst serving with HMD Victoria I, for his actions on 27 January 1942 when he was a Leading Stoker.   According to my mother, (my father never spoke to me of his wartime activities), they were under attack by an enemy fighter.  They were equipped with a gun which was being used to fire at the enemy aircraft.  The gunner was fatally shot during the attack.  My father removed the gunner’s body from the gun to take his place, returning fire and causing the enemy aircraft to end the attack and fly away.”

Tom Tompkins’ niece went on to explain “I knew my father was on board HMS Calypso when it was sunk by an Italian submarine.  As an infant, I went to school in Bedford with the Italian children from the immigration in the early 50’s.