Stories in the Landscape: Accidental greed in the Tinker of Turvey in 1838 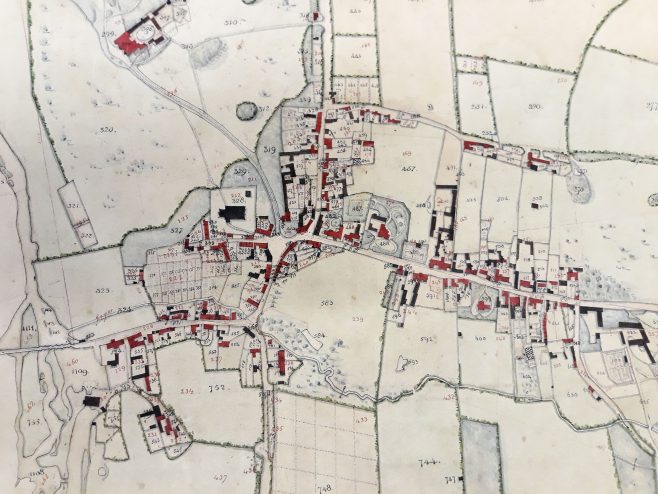 Part of the ‘Plan of the parish of Turvey in the County of Bedford, surveyed in 1838 by W.G. Wallace’ by kind permission of Bedfordshire Archives.

Alfred Russel Wallace enjoyed his work as a 15 year old assisting his brother in and around Turvey in 1838, laying the main lines for a “survey of the tithe commutation of a parish”.  New tax laws (Tithe Commutation Act, 1836) and the division of public land among landowners (General Enclosures Act, 1845) required accurate surveys and maps of farmlands, public lands, and parishes.  The Government had commissioned his older brother to measure the land in and around Turvey.  For about six months Wallace stayed in the Tinker of Turvey inn (now Central Stores).  His comments in his book “My Life, A Record of Events and Opinions.” written in his 80s but published in 1905, recorded a busy and prosperous community. 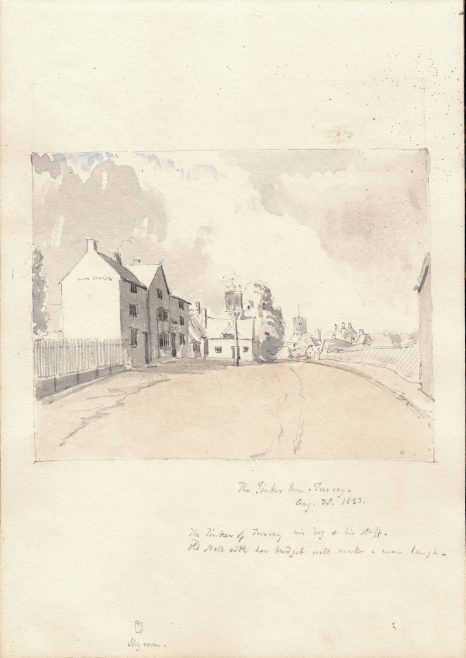 The Tinker of Turvey Inn

In the Tinker of Turvey (the article The Tincker of Turvey has further information about the inn’s history), he had his meals in a large room on the ground floor, which was the farmers’ room.   On most evenings, he shared the evening meal with all the other guests staying in the inn.  He vividly remembered being 15 years old when his colleague was around 19 years old, both with healthy appetites from working all day measuring the fields.

On one occasion, his brother, their supervisor, went away for two weeks.  Wallace explained:

…as we worked very hard, and seldom got home before six in the evening, we had an unusually good appetite for our evening meal, and sometimes astonished our hosts.

The meals were usually laid out for all diners.  He explained that on one occasion “They had provided for our dinner a spare rib of young pork — a very delicate dish but not very substantial — with potatoes.”  This so delighted the hungry trainee that he:

…first cut the joint in half, about three or four ribs in each, and said to me, ‘I know you like fat; if I cut off this lean piece, will you have the rest?’ I joyfully assented, as I was very fond of the picking on the bones. We soon finished our portions, and then he cut the lean off the rest of the joint, gave me the ribs, and we very soon left nothing but the cleaned-picked bones.

Wallace was aware that he could give a false impression, so moved half the bones on to the trainee’s place, “so that it might not be thought that I had eaten the whole joint myself.”

They were feeling very happy with the meal, noticing that “The servant looked astonished at the empty dish when she brought us in a rather small apple-pudding.”  Wallace was again being fair, so cut the pudding in two.  They commented to each other that “it was hardly as much as we should have liked.”  He was then surprised when the servant returned to a second empty dish because “she smiled, and told us that some people had been waiting for the rest of the pork and pudding, and now had nothing for dinner. Having been served the whole meal sitting alone in their usual dining room, Wallace and the trainee had a clear conscience “and asked for bread-and-cheese to finish with”.