You are here: HomenextTopicsnextPeoplenextTurvey's Australian Connections with World War 1 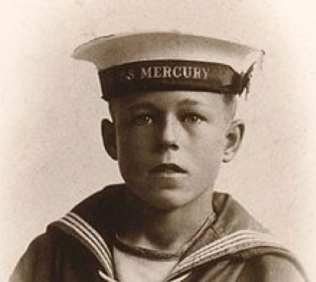 zoom
Claude Choules in his training days with TS Mercury 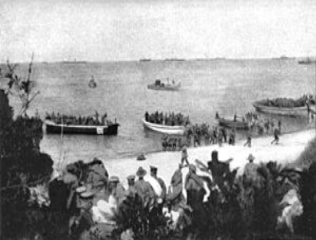 zoom
4th Battalion landing at Gallipoli on 25th April at around 8am
With permission of the Imperial War Museum Ref: Q112876 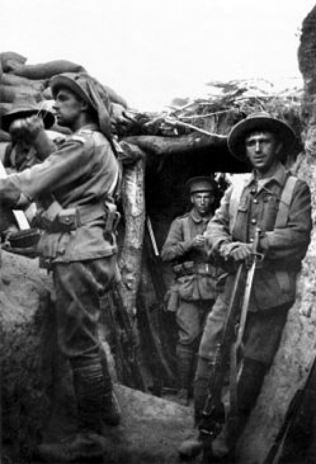 A former Turvey resident, now living in Australia, had a great-uncle with an interesting First World War history. Michelle Choules, lived in Turvey from 2005 until 2010 and her daughters attended Turvey Pre-School Play Group and Turvey Lower School. Michelle’s great uncle was Claude Choules.

Claude grew up in the delightfully named Wyre Piddle near Pershore in Worcestershire. He joined the Royal Navy in 1915 aged 14. After his training, he went on to serve in ships and while on HMS Revenge he witnessed the surrender of the German fleet at Scapa Flow in the Orkneys at the end of World War 1. The Germans famously scuttled their ships in 1919 after months of uncertainty and lowering morale.

Claude stayed in the navy after World War 1 and in 1926 he transferred to the Royal Australian Navy and became an Australian citizen. He rose to the rank of Chief Petty Officer and served with them, throughout World War 2, until 1956. Claude died in May 2011, aged 110 years, and became the last known male participant of World War 1.

In 2011 Australia purchased the naval landing ship Largs Bay from the British government and renamed her HMAS Choules in recognition of the two nations’ historic close military ties as well as Claude’s lifetime achievements. You can read more about Claude Choules in his autobiography “The Last of the Last” which was published in 2009 by Mainstream.

Percy Clifton, whose name appears on the village war memorial, was actually born Percival Edgar C Hartwell in early 1891. He was the son of John Hartwell and Charlotte Lavinia Clifton (originally from Felmersham). They lived at Rose Cottage, 1 Mill Green. Unfortunately John, who was a domestic groom, had died a few months before Percy was born.

Charlotte re-married one William Arthur Clifton in October 1891, a labourer from Turvey, and Percy took his surname. Percy had five brothers: Eli, Herbert, Thomas, Cyril and William plus one sister Edith and two step-sisters Emily and Florence.

The census of 1911 lists Percy as single and working as a domestic gardener and still living at Rose Cottage. He emigrated to Australia sometime after 1911 and disembarked at Sydney in the state of New South Wales.

As war broke out in 1914 he volunteered for the army at Cudgewa, Victoria and served in the 4th Battalion, Australian Regiment who were concentrated around the area of Randwick near Sydney. He attained the rank of Lance Corporal.

This battalion, as part of the 1st Brigade, was one of the first Australian units to be deployed overseas in World War 1. They left Sydney on 28th October 1914 on HMT Euripides, calling at Albany, Western Australia before heading to the Middle East.  December 1914 found them in Egypt defending the Suez Canal. In April 1915, they took part in the second and third waves of the amphibious landings at Gallipoli in Turkey. This was the British and French plan to secure the sea route to its Russian allies and to capture the Turkish capital Constantinople (now Istanbul) and knock Turkey out of the war. After a stalemate lasting several months, the 4th Battalion took part in the attack on Lone Pine Hill and Percy was killed during that attack on Friday 6th August, aged 24. The allies withdrew in January 1916 but the invasion did contribute to political unrest in Turkey and the eventual end of the Ottoman Empire. Today Lone Pine Cemetery is maintained by the Commonwealth War Graves Commission. Percy is commemorated at Sp. Mem. A.3.