You are here: HomenextTopicsnextPeoplenextAn Introduction to the Higgins of Bedford & Turvey Family Tree

An Introduction to the Higgins of Bedford & Turvey Family Tree

The simple answer is yes and the progenerates of all the Higgins associated with Turvey and Bedford are John Higgins, a Yeoman, a term usually used for a successful farmer, and his wife Elizabeth Beard, both of Weston Underwood.

John’s ancestors would have lived through the feudal society when all power and privileges were held by the Lord of the Manor, with the serfs little more than slaves. By 1600 there were no serfs remaining in England, but the landed gentry retained much influence and privilege.

By an Act of 1559 households were fined for not being represented in the church on Sunday and, no doubt, it would be in the family pew, which can still be seen, at St Laurence (St Lawrence) Church is Weston Underwood.

John was born in 1595 and married Elizabeth Beard, born in 1602, on 26thFebruary 1622 in St Laurence’s’ Church. They had four children, all born in Weston Underwood, two sons and two daughters. The daughters’ baptisms have not been found but Sarah married a Mr Sharp and Ann married a Mr Lewis

John Higgins died on 3rdOctober 1656 and his will made provision for his wife through accommodation and a small sum of money, small sums were also left to the two married daughters.  Whilst Bartholomew, the eldest son, born in 1625, might have expected to be the principal heir, the will made clear that Hugh, born in 1628 was to be such as well as executor of the will. One reason for this is that Hugh remained in Weston Underwood, overseeing the farms with his father, whilst Bartholomew had settled in Northamptonshire, probably Preston Deanery, with his wife and three children. Bartholomew was left the lease on some fields and some stock. 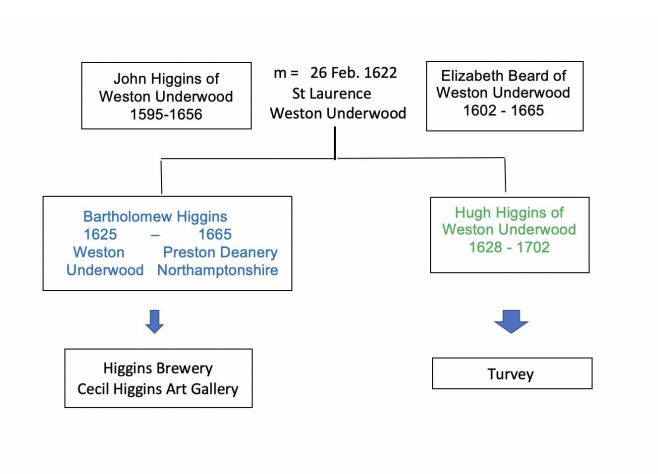 We now follow Hugh Higgins who became a husbandman and a Parish Officer. He married twice, his first wife Mary Baker, whom he married on 22ndSeptember 1652 at St Paul, Bedford, gave birth to three children, all born in Weston Underwood. His second marriage, following the death of Mary, was to Elizabeth Kinge, whom he married on 12th September 1675 in Weston Underwood, and who gave birth to four children.

Hugh was born in 1658 in Weston Underwood and christened in St Lawrence on 7th September 1660. From primary sources it is known that he married a Susanna. Secondary sources have suggested that this was Susanna Hooton and that the marriage took place in Northampton on 23rd July 1682 but there are no known records to support this conjecture. Hugh undertook various official duties in the parish and established some independence from his father prior to inheriting the main body of the estate.

Hugh, now a husbandman, and Susanna Hooton had four children, all born in Weston Underwood. Our interest will be with son John, who marries Ann Kilpin of Hardingstone. In Northamptonshire and who will lead us to Turvey Abbey.

Mentioned above was the fact that John Higgins married Ann Kilpin of Hardingstone in 1720 and in 1739 Bartholomew Higgins married her sister Elizabeth. From here it is possible to create the family tree resulting in the Higgins of Turvey House and Turvey Abbey, but it is best seen through the Kilpin family tree. 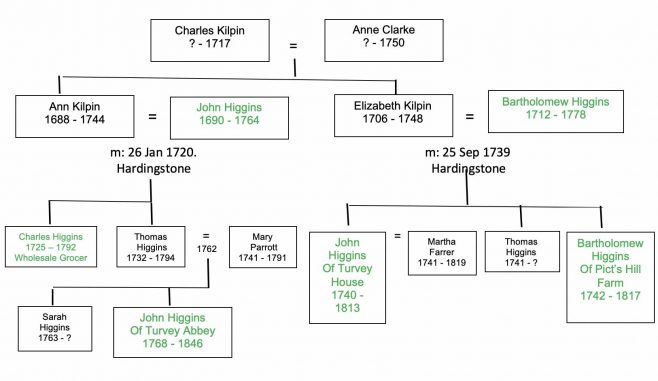 Descendants leading to the estates of Turvey Abbey, Turvey House and Pictshill.

Charles Higgins (1725) became a very successful, London based, wholesale grocer who accumulated enough wealth to purchase part of the Turvey Estate, which included Turvey Abbey and the Pict’s Hill Estate, from Charles Mordaunt, the Fifth Earl of Peterborough. The article Charles Higgins: The Grocer who purchased Turvey provides further information on Charles whilst the article The Purchase of Turvey covers the sale of the Turvey Estate and his purchase of Lot 3. Charles never married and in his will he left various bequests to his relations. In particular, his nephew John Higgins (1768) inherited part of the Abbey Farm estate and became the first Higgins to live at Turvey Abbey. Charles bequeathed the Pict’s Hill Estate to his half cousin Bartholomew Higgins (1742).