You are here: HomenextTopicsnextPeoplenextThe First Assisted Passage to New Zealand 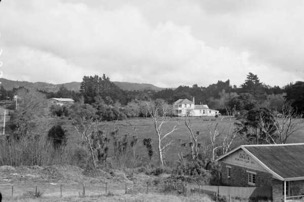 By the 1840s, the New Zealand Government was desperate to attract migrants to the country in order to farm the land and provide essential trades, but the journey was long and hazardous and the working people they wanted to attract could not afford the cost of the passage. The Government thus instigated an assisted passage scheme, whereby passengers could pay for their passage with a small down payment, on the understanding that they would repay the rest at a later date.

The first ship to sail with assisted passengers was the Barque Westminster, which left Plymouth on 4th December 1842 to arrive in Auckland on 31st March 1843. On board was Mrs Jane Parr, formally Jane Elizabeth Davison of Turvey.

Jane was born on 4thApril 1810 and baptised in All Saint’s Church on 20thApril. Thomas Bates Parr  was born on 11th August 1807 in Redmile, Leicestershire and was a journeyman gardener who came to Turvey for employment. They married on 3rdNovember 1828 in Turvey. Their first child, Edward John, was born on 21stMay 1830 in Turvey; they would go on to have a son and daughter born in Norton, Durham and another son born in Blackwell, Somerset.

Jane was already pregnant when she and Thomas and their four children boarded the Barque Westminster and she gave birth to a daughter, Sarah Elizabeth on 10thSeptember 1843, after she had arrived in Oratia, Auckland. Sadly, this daughter died six weeks later.

When the Barque Westminster arrived in Auckland, the Government had still not concluded negotiations with the indigenous Maori population for the purchase of land on which the new immigrants were to settle. Thomas found work as a gardener and labourer in and around Mount Eden, Auckland and by 1845 the family had bought a property in the area. Here, Thomas created a plant nursery and planted an orchard using seeds he had secretly brought from England.

In 1854, the family was able to buy “Allotment 14”, which consisted of 536 acres in the parish of Waikomiti, West Auckland, with the aid of a Crown Grant of £243. Here, Thomas created more nurseries and orchards, calling the estate “Albion Vale”. The estate prospered, a herd of 30 cows was established and the estate produced milk, butter vegetables, fruits and cereals for sale. Logs from a flood devastated the property in 1870 and a mortgage of £1000 was raised to undertake repairs. This was only half paid off by the time of Thomas’s death on 14thMarch 1877. His three grandsons eventually cleared the debt and were each given 50 acres of land.

The nurseries and orchards continued to prosper and after Thomas’s death in 1877 the business passed to the eldest son, Turvey born Edward John. It was he who, in 1810, built the family homestead in Oratia to house his 15 children, who were all born within a period of 20 years.

Jane died on the 12thNovember 1880. We don’t know whether Jane ever moved to the homestead, but she must have reflected on how much her life had changed in the last forty years.

Now a Category I Listed Building, the house has been restored to its original design after being used for many years as “The Town and Country Roadhouse”, considered one of the finest restaurants in Auckland in the 1940s. The small Oratia Folk Museum is adjacent to Albion Vale. It was originally a small settler cottage built around 1870.

The family managed the orchards until 1910 and many descendants still live in and around Mount Eden. You can find more information about the orchards and recent generations of the Parrs by reading an article by Eve Kent that originally appeared in Turvey News and is now in Turvey History Society’s archive.