It is difficult to be in Turvey for long without coming across the name Mordaunt.  There is Mordaunt Close and there are several imposing memorials in the church to members of the Mordaunt family.  Clearly they were of some importance in the village – but where did they come from and where did they go to?

Their name might suggest that they arrived from Normandy with William the Conqueror but there is no record of the name in the Domesday Survey of 1086.  It was considered highly prestigious to be of Norman French origin, but many of the soldiers who made up William’s army came, not from Normandy, but from the neighbouring provinces of Brittany and Flanders.  There was a Breton village just to the east of the town of Rennes that was called Mordan and in another part of Brittany the town arms of Plestin-les-Cotes d’Armor are identical to that of the English Mordaunts.

Of course, that proves nothing!  It is interesting to note, however, the absence of the name Mordaunt from the Domesday Survey. William rewarded his closest and most important followers with grants of land in England.  The Mordaunts are not there.

The first record of the name in England, William mordaunt (sic),  is from a document published in 1685 under the name of Robert Halstead, but written by Henry Mordaunt, 2nd Earl of Peterborough.  Osmund Mordaunt (was this William Mordaunt’s son?) is recorded as holding land in Bedfordshire and his son Eustace inherited the tenancy of the land, 30 acres in Radwell, from his father in 1197.

The Mordaunts were survivors who served their country well.  They made several very advantageous marriages which enabled them to build large landholdings in Bedfordshire and neighbouring counties and, for the most part, they managed to navigate the religious whims of succeeding monarchs in the sixteenth and seventeenth centuries to keep their land and power intact.

Their arrival in Turvey probably dates for the early 1200s when Eustace married Alice de Alneto. Alice was one of two sisters whose family were thought to be the main occupiers of the land around Turvey at this time.

Little more evidence of the family has been found until the time of Eustace’s great-grandson, Robert, who held office as coroner for Bedfordshire for several years and who represented the County in the Parliament of 1341 in the reign of Edward III.  Indeed, records show that the principal contribution of the Mordaunt family to public life was in the areas of politics and the law. Succeeding generations also served as Members of Parliament and as County Coroner and were increasingly important at court, although their adherence to  Roman Catholic traditions hindered their progress  somewhat after the Reformation.

The most successful members of the family are, perhaps, those represented by the large tombs in All Saints Church and more details of their lives are to be found on this site.

However, it is worth mentioning the  fifth Baron, John, who lived between 1599-1642 in more detail. He was taken from his widowed mother in 1609 and placed in the care of the Bishop of London to be raised a Protestant.  At that time public offices and government posts were barred to Roman Catholics.  There were genuine fears that not enough good Protestant gentlemen would be found to fill all the vacant posts. This move was obviously a success as John was appointed Knight of the Bath in 1616 and Earl of Peterborough in 1628.  However, he supported the Parliamentary side in the Civil War!

It was during his time as Lord, in 1612, that the feudal structure in Turvey was finally dismantled and the Mordaunts no longer held the same power in the village.  The family continued to serve successive monarchs – and the country – with varied fortunes and prosperity, often reflecting the religious and political nuances of the time!

The family had ceased to live in the village after 1515 when they made Drayton Hall their principal seat. Their land holdings in the village were finally all sold after the Enclosure Award of 1785.   The Barony of Turvey died out with the death of Gordon, 12th Baron, who died in 1836 without an heir.

The Mordaunt Family Represented in All Saints, Church, Turvey. 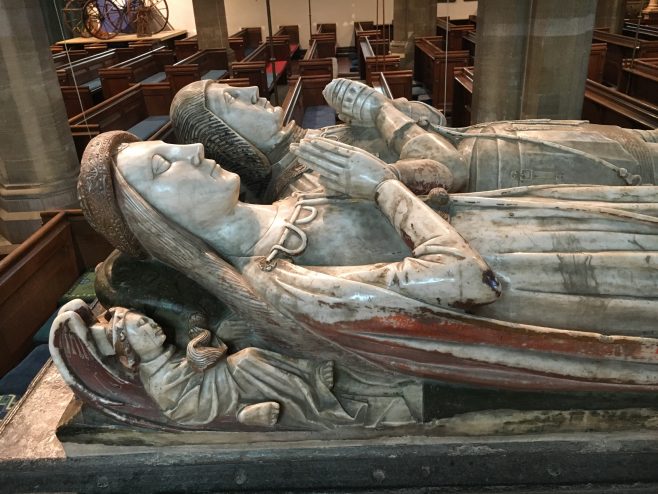 The beautiful alabaster tomb in the south aisle is that of Sir John Mordaunt and his wife, Edith Latimer.

It is likely that Sir John received his knighthood for supporting the right side in the Battle of Bosworth Field in 1485, when the armies of King Richard III were defeated and Richard was killed by the armies of Henry Tudor.  Henry took the throne as King Henry VII, the first of the Tudor monarchs.  John served the King well, also supporting him at the Battle of Stoke in 1487 against the pretender to the throne, Lambert Simnel.   He was a member of the Middle Temple and a JP.  He was a Member of Parliament for several different constituencies at different times, he was chief justice at Chester, high steward at Cambridge University and Chancellor of the Duchy of Lancaster. He also became a King’s Counsellor and sat in the Star Chamber, an extremely powerful body that wielded arbitrary justice; its name is now synonymous with the abuse of power.  A notice in Turvey Church gives the date of John’s death as 1506 but family records show that he probably died two years earlier in 1504 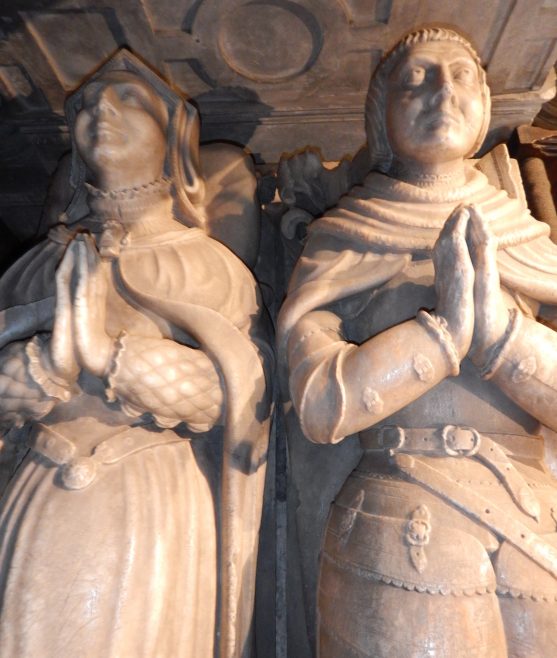 The tomb under the canopy in the Chancel is that of John, first Baron Mordaunt, and his wife,
Elizabeth Vere

The John commemorated on this tomb is the son of the John who was prominent at court under King Henry VII.  This John was also a member of the Middle Temple and was important in the Tudor Court of Henry VIII, who became King in 1509 when John was Sheriff of Bedfordshire and Buckinghamshire. In 1513 he was granted the Mordaunt coat of arms (seen on the tomb of Lewis, third Lord Mordaunt near the back of the church).  John was clearly very important at court; he was at The Field of the Cloth of Gold in France, where Henry VIII met the French King, Francis I. He was also with the King at his meetings with the Holy Roman Emperor, Charles V, at Gravelines in the same year and in 1522 in Canterbury.  By 1526 he was one of the King’s council and was involved in investigating the possessions of the great Cardinal Wolsey after the Cardinal’s fall from power in 1529.  In 1532 John was created Baron Mordaunt of Turvey and took his seat in the House of Lords on 4th May.

The Protestant Reformation created a dilemma for all prominent families and members of the court, particularly those whose real allegiance was to the Church in Rome.  John managed to survive reasonably well but his progress at court slowed and he held only minor posts under King Edward VI, who became King in 1547.  John died in 1562 after Mary Tudor, also known as Bloody Mary, had become Queen and attempted to restore Roman Catholicism in England.  John, first Baron Mordaunt, had introduced his son, yet another John, at court during the reign of Henry VIII; it was this third John who declared himself a true follower of Mary and the Church of Rome. 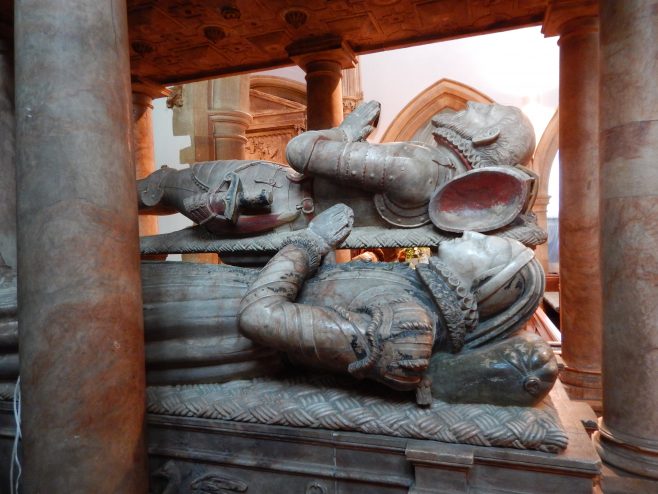 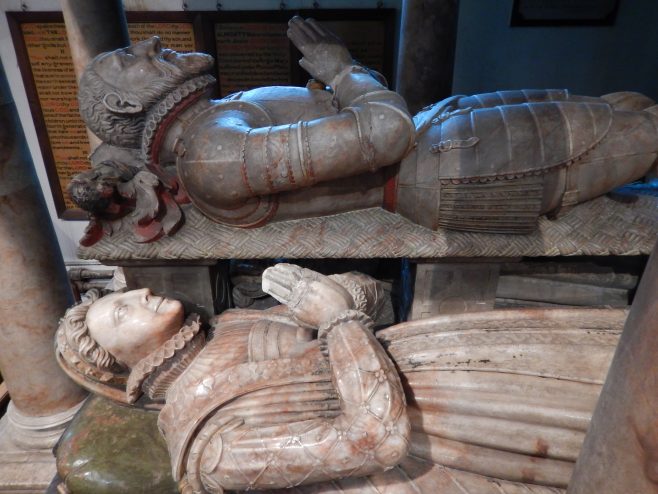 The tomb in the north aisle is that of John, second Lord Mordaunt with his wives, Ellen Fitz Lewis and Joan Farmer

This third John was to be caught up in the difficulties caused by the Reformation and his fortunes varied according to the religious conviction of the monarch of the time!  Initially he was a good servant of King Henry VIII and was created a Knight of the Bath in 1533 at the time of the coronation of Queen Anne Boleyn.  He was present to welcome Anne of Cleves at Blackheath and was included in the list of gentlemen expected to transact affairs for Queen Jane Seymour.  However, John’s second wife, Joan Farmer, had been in the service of the Princess Mary, and when she became Queen in 1553, he declared himself for Mary and the Roman Catholic cause.   This earned him a place on Queen Mary’s Council, and he attended meetings regularly.  He was present at Mary’s coronation and at her wedding to King Philip of Spain.  He was also active in suppressing opponents of Catholicism.  He was a justice of the peace and from 1557 was a heresy commissioner in the diocese of London.  The accession to the throne of Elizabeth I in 1558, and the return to Protestant ways of worship, brought him into disfavour at court and by April 1561 he was imprisoned in the Fleet, ‘a prisoner for the mass’.  It is unlikely he stayed there long as he attended the Parliament of 1563 as a peer. 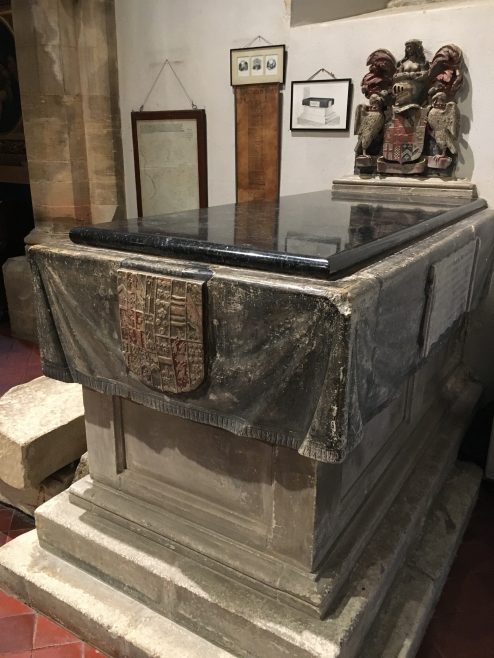 The tomb at the back of the church, near the north aisle door, is that of Lewis, third Baron and his wife, Elizabeth Darcy

Lewis succeeded to the title as Third Baron Mordaunt in 1571 on the death of his father. Lewis was also a member of the Middle Temple and was clearly important in affairs of state.  He was present at the trial of Mary Queen of Scots in 1586 after she was implicated in the Babington Plot to remove Elizabeth from the throne and replace her with the Roman Catholic Mary.  It is said he was a reluctant judge of Mary with whose death sentence he did ‘most unwillingly concur.’  He was also judge at the trial of Thomas, Duke of Norfolk.  Lewis is reputed to have been a lover of art and fine buildings and it was he who removed the family permanently to the estate of Drayton Hall in Northamptonshire. The Hall had been acquired in 1515 by an advantageous marriage and was much grander and more comfortable than Turvey Old Hall.  His is the last of the great Mordaunt tombs in the church but it is likely that later members of the family are buried in the church as the family still looked upon the village as their ancestral home.

(i) This brief account of the Mordaunt family draws heavily on the booklet written by Henry Mordaunt ‘A history of the Mordaunt Family’ which is available in All Saints Church.  In some places it is quoted verbatim and THS is  grateful to him for allowing the use his research in this way.