You are here: HomenextTopicsnextBuildings, Monuments and FeaturesnextTurvey Bridge - A Brief History

Turvey Bridge, spanning the River Great Ouse, is the distinctive entrance to the village from the west, and forms the boundary between Bedfordshire and Buckinghamshire. It was designated as a Scheduled Monument in 1930, a nationally important historic building given protection against unauthorised change.

The bridge is 209m long and 10m wide. It is formed of eleven arches, seven spanning the east channel of the river (nearest the village) and four the western channel, with a raised causeway connecting them. Beyond the west channel, the road is carried on a causeway across the flood plain. Two arches on the west and six on the east parts have pointed cutwaters on the upstream (south) side of the bridge. 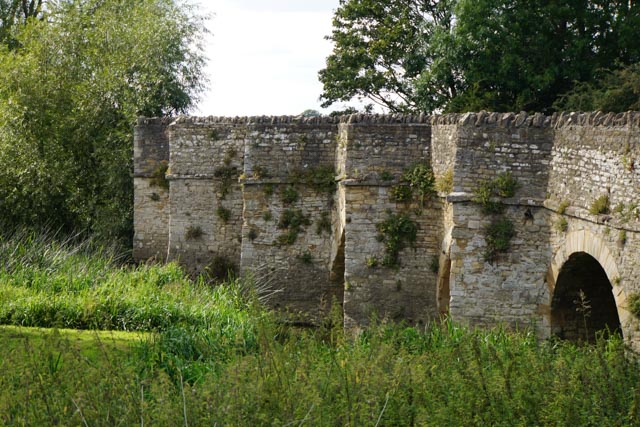 Turvey Bridge from the southeast, Sept 2019 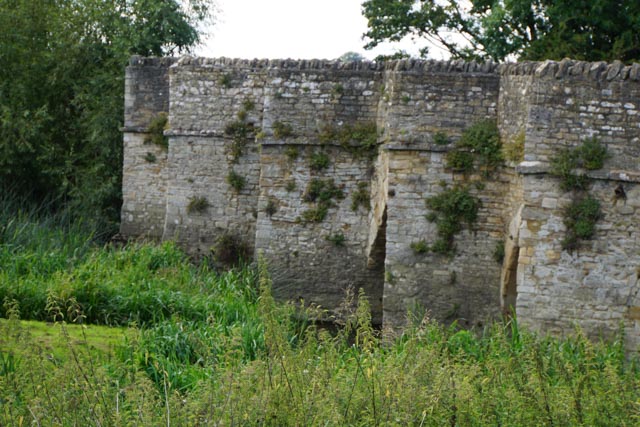 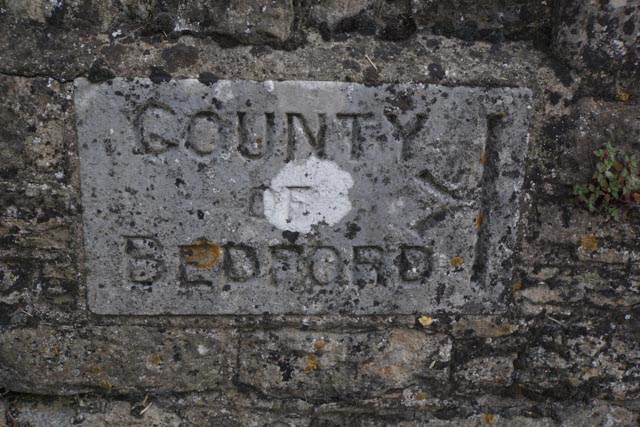 County Boundary stone on the bridge

The earliest record of the bridge is in 1136/38 when the Drayton Charters records that Sampson Fortis granted ‘2 acres of meadow next Turveie Bridge’ to Harrold Priory. Another reference is in 1272 when justices travelling from Northampton to Bedford stopped at the bridge and heard four cases.

By 1402 there are records of a ‘hermitage and chapel’ built on the bridge, although it had disappeared by the time of the Chantry survey of 1546. It was probable that income from alms funded repair work.

In the 16th century, money was left in the wills of local noblemen, including John, first Lord Mordaunt towards the repair of the bridge. His will of 1560 records

I will and bequeath to the inhabitants of the Town of Turvey for and towards the new repairing of Turvey bridge, as much as is within the County of Bedford, £40, and for the repairing and amending of the long bridge (the causeway) within the County of Buckingham, to the reparations and keeping whereof the Towns of Hardemeade, Astwood, Lavendon, Newton Blosmafeld and Brafeelde are contributors, £26.12s.3d.

The medieval bridge had two components, a foot causeway and the river bridge. The foot causeway on the west side of the river is shown in maps from 1783; according to John Higgins of Turvey Abbey it had twenty two planked and two stone arches and was just over 2m wide. There was a raised stone footpath on the north side of the road on the Turvey side of the bridge.

A survey in around 1630 described the bridge as having ‘four high arches’ over the east channel of the river, and two over the (then) much smaller channel to the west. At this time, the width of the bridge was about 4.25m. 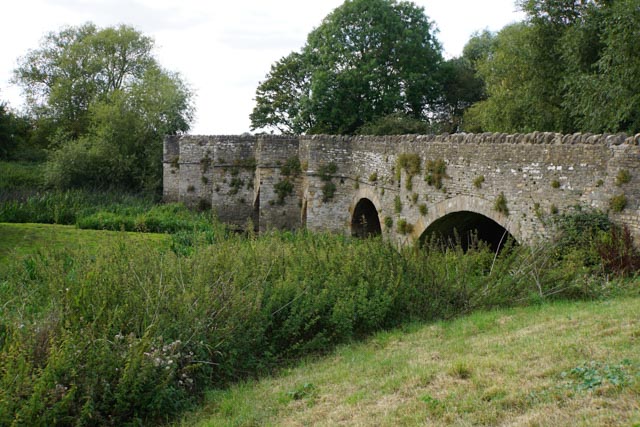 High arches of the original bridge on the Bedford side, Sept 2019 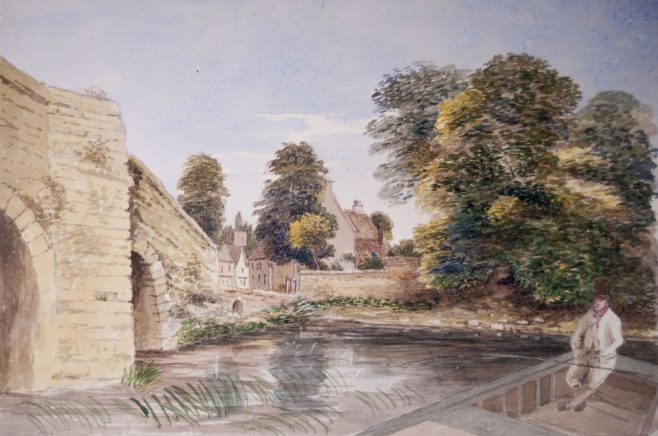 Turvey Bridge South Side. Note the very low arch at the Turvey end – replaced by the broad arch in 1824. Watercolour by John Higgins © j. Longuet Higgins 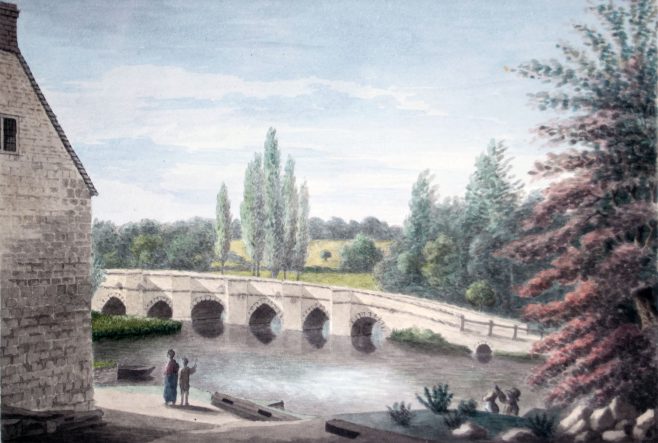 Bridge over the Great Ouse. The low arch and culvert are clearly visible. Watercolour by John Higgins © J. Longuet Higgins.

The Bedford to Olney Turnpike Trust was founded by Act of Parliament in 1754. There were severe floods in 1795, causing one of the arches over the eastern channel to collapse. This triggered a debate over who was liable for repairs; the Mordaunt estate had been sold in 1786, with part going to John Higgins who became Lord of the Manor. It was determined that the Higgins family was responsible for the upkeep of the bridge, so they rebuilt the arch, and in 1820 joined with the Turnpike Trust and the parish to rebuild the one nearest Turvey. Further flood damage in 1823 necessitated additional repairs, the costs of which amounted to £120 8s 1d. This included the cost of searching the records to find who had paid for repairs in the past, indicating that responsibility was still not resolved. In 1824 an additional broad arch was added on the Turvey side over a small culvert. This was constructed with stone from the quarry in Bakers Close, on the site of the current development. 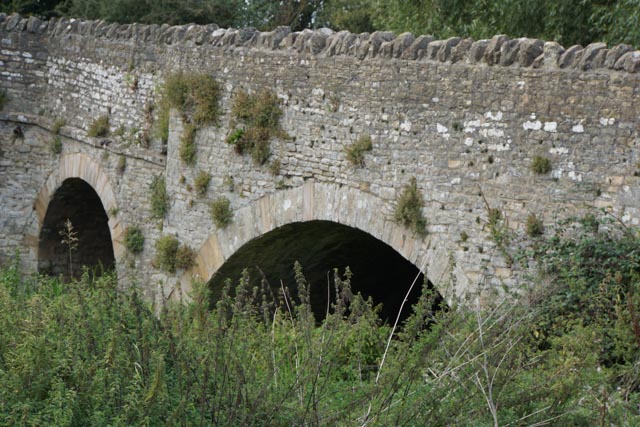 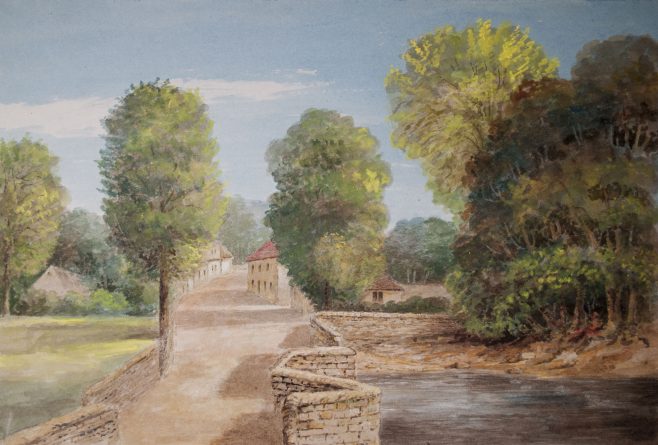 The bridge in 1839. Watercolour by John Higgins. © J. Longuet Higgins

In 1828 the Turnpike Trust constructed the roadway with ‘two large flood arches which were united to the west end of Turvey bridge…. but no part of the natural stream passes under these flood arches’. Although these were constructed as dry arches, they now span the main channel of the river. 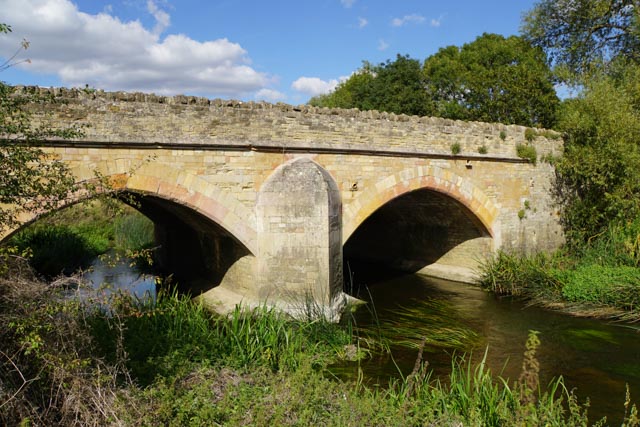 As part of these works, the causeway was demolished, although one section was left standing, as John Higgins recorded ‘as a memorial, and picturesque object from the road’. This is still visible in the meadow south of the road, and is reached by the remains of a small section linking the two parts, over a culvert. 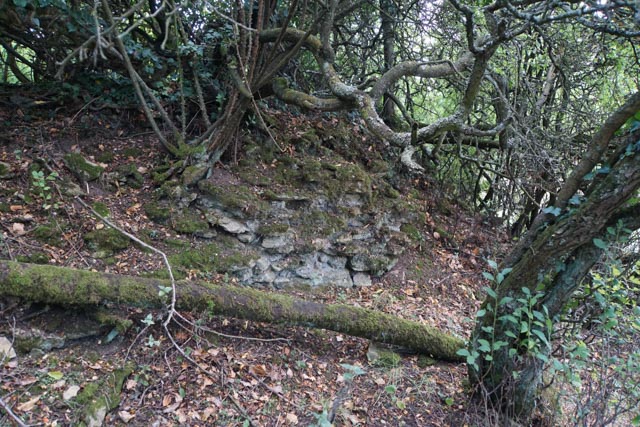 Remains of the stone causeway 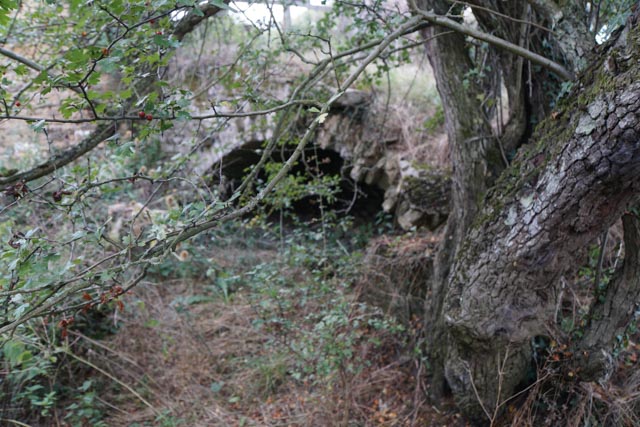 The Turnpike Trust was wound up in 1874, by when the bridge had fallen into disrepair, and in 1876 legal proceedings were again begun at Northampton Assizes to determine responsibility for its upkeep. The case was resolved in 1879, confirming that the counties of Bedfordshire and Buckinghamshire were jointly liable. The western approaches were rebuilt in 1880, and Bedfordshire County formally took responsibility for the maintenance of the bridge from 1881.

By 1930 road traffic had increased considerably, and the Bedfordshire Times and Independent of 13 June reported “For some years past, however, it has proved quite inadequate to meet modern demands, for there are places in its length where two big lorries are unable to pass one another. The bridge’s ancient stones are in many places rudely scraped and scored as a result of unfortunate encounters with motor vehicles.”

Road bridge prior to 1930 widening

Road bridge in 1932 after widening

The Highways Committee approved a scheme in January 1928, estimated to cost £13,647. Buckinghamshire also approved their share of the works, and approval was sought from the Ministry of Transport to proceed. Work started in March 1931, and the widened bridge was completed in June 1932. The total cost of the works was £16,000.

Before the widening works, the minimum carriageway width was 12ft, and the works removed the north side parapet, rebuilding on a line to give a minimum width of 30ft- a 20ft carriageway and a 5ft kerbed path on each side. The new portion was constructed in reinforced concrete, and encased in the limestone matching the original bridge. In 1933, H C Griffin of The Council for the Preservation of Rural England wrote to The Times:

“…it is a matter of public interest that this ancient and beautiful bridge has not been debased by the present widening. Its character has been most carefully preserved in the process, even the old stones and watercourses being replaced in their original positions.”

Further works to stabilise the parapets and undertake general repairs were carried out between 1991 and 1994. 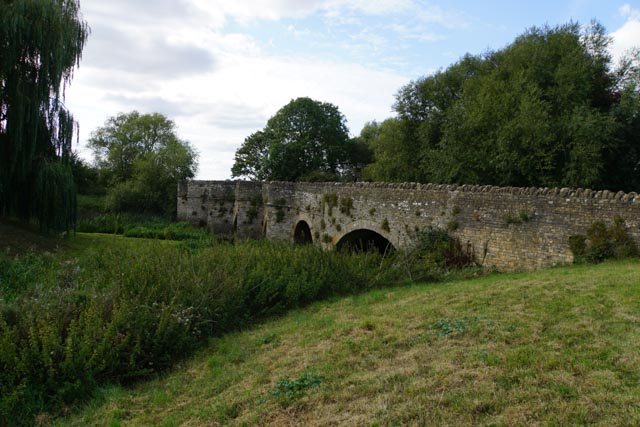 Jervoise, E.  The Ancient Bridges of Mid and Eastern England, 1932 Kindle version from 2017