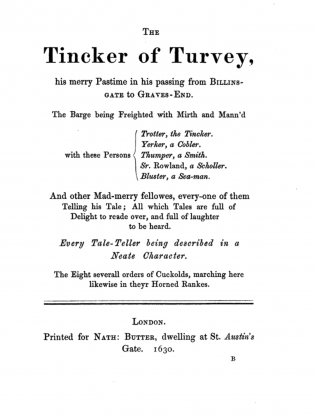 zoom
The Tinker of Turvey 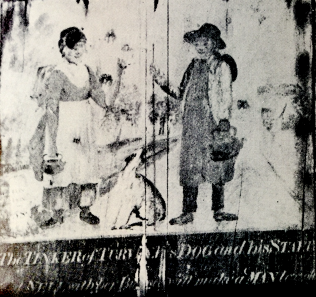 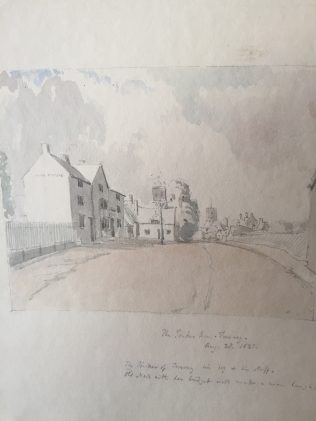 The building now occupied by the Central Stores and the adjoining houses was once a well-known inn called “The Tinkers Inn”. A strange name for an Inn one might think. This article explores the possible origin of that name and provides a brief history of the inn. Our starting point is also something of a surprise, Geoffrey Chaucer’s Canterbury Tales.

Geoffrey Chaucer (c1343 – 1400) is widely considered to be the greatest English poet of the Middle Ages and is known as the Father of English Literature. Today, his most well known work is The Canterbury Tales, written in Middle English and published in 1387.

The tales form a story telling contest by a group of pilgrims as they travel together from London to Canterbury to visit the shrine of Thomas Becket. Chaucer’s use of a range of people from various levels of society was unprecedented as was his use of the English vernacular.  The structure of the collection of tales draws on Giovanni Boccaccio’s original work, The Decameron.

Tarltons Newes & The Cobbler of Canterbury

Nearly 200 years later, in 1590, there appeared an anonymous book called:

Tarltons newes out of Purgatorie. Onely such a iest as his Ligge, fit for Gentlemen to laugh at an houre, &c. Published by an old companion of his, Robin Goodfellow

Tarltons News is a collection of tales that draws heavily on the style of Boccaccio and consequently Chaucer. A dreamer visits purgatory where he narrates the stories of those who have been sent there. This publication seems to have upset someone, for almost immediately another book is published called the Cobbler of Canterburie, the only original copy of which now exists in poor condition in the Bodleian Library.

The 1608 edition introduced the book thus:

The Cobler of Caunterburie, or An inuective against Tarltons Newes out of Purgatorie. A merrier Iest then a Clownes Ligge, and fitter for Gentlemens humors. Published with the cost of a Dickar of Cow- hides. London, Printed by Nicholas Okes for Nathaniel Butter and are to be sold at the signe of the pide Bull neere to Saint Austins gate

Whilst Tarltons News is a collection of stories narrated by the same person, The Cobbler of Canterbury reintroduced Chaucer’s method of storytelling with a variety of narrators going on a journey. The introduction to the book emphasises the esteem in which the anonymous author holds for Chaucer for whilst similar in style the book is cruder both in the language used and in the quality of the prose

In the Cobbler of Canterbury, the storytellers are going by barge from Billingsgate to Gravesend. This much smaller gathering are certainly not pilgrims going to Canterbury, particularly as Thomas Becket’s shrine had been totally destroyed, some 50 years earlier, at the time of the restoration.

The Cobbler of Canterbury became popular, having many reprints. The book also gave rise to a number of derivatives in the early 1600’s, using a variety of journeys and various storytellers. One such derivative was the Tincker of Turvey, an anonymous book published in 1630 of which there is a very rare copy in the British Museum but which can be read on-line.

This publication is even cruder in text and literary merit than the Cobbler of Canterbury and refers to the use of Dunstable Doggerel. The stories in the book also take place on a barge as it travels from Billingsgate to Gravesend but here the storytellers are:

Trotter, The Tinker of Turvey
Yerker, The Cobler
Thumper, The Smith
The Gentlemen
Sir Rowland, The Scholler
Bluster, The Seaman

Naturally, Trotter, the Tinker of Turvey, attracts our interest.   The Tinker is introduced thus:

The Tinker hammers out an Epistle, to all Gentlemen, that love Lattin, to all strowling Tinkers; And to All the brave Mettlemen that Travell on the Hoofe, with a Dog, and a Doxie at’s Tayle.

Here sits a joviall Tinker
Dwels in the towne of Turvey.
I can mend a Kettle well,
Though my Humers are but scurvy.

This is very similar to a ballad called “A Medly” published in the  “Sportiv Wit” of 1656, which contains the line “A jovial Turk dwelt in the town of Turvey; and he could tune a kettle well, but his hammer was scurvey.”

We will probably never know who this 1630 Tinker of Turvey actually is, but his fame was such that he featured in a ballad, well known at the time, which in turn became the title of the book.

The actual date that the Tinker’s Inn came into being is not known, but the Historic Environment Record (HER) states that the original building was erected around the mid 1700’s and the Tinker Inn is itemised in the Earl of Peterborough’s 1786 sale of Turvey. In the early 1800’s Legh Richmond, Rector of All Saints Church,  attracted visitors from far and wide to hear his Evangelical preaching and the Tinker’s Inn would have a great many carriages parked outside on a Sunday.  Wallace, in his book, “My life”, has a chapter devoted to Turvey in which he records his time in the village in 1838 and his stay at The Tinkers Inn.

There is also evidence that The Tinker’s Inn was an important staging post for coaches travelling between Warwick and Rugby to London and vice versa in 1838.  There is recorded evidence that in 1839 the Oxford to Cambridge Coach stopped at the Tinker’s Inn on three times a week in either direction.

The HER states that the building underwent considerable re-modelling in 1861, converting the Inn to the three dwellings that are now visible (The Old Tinkers Inn, The Central Stores, Gables End) and a hand-written note from Don Beatie states that The Tinker’s Inn ceased to be a coaching inn in 1860. The regulars of the Inn were so sad to see it go that they formed “The Tinkers Club” which met regularly at the Three Fyshes until the early 1900s. The property remained in the hands of the Longuet Higgins until the “Old Tinker’s Inn” and the surrounding land was sold by John Esmond Longuet-Higgins to Joseph Percival Wooding on 13th October 1953.

The Tinker of Turvey, his dog, and his staff
Old Nell with her budget will make a man laugh

A water budget or budget is a skin bag for holding water, thought to have been introduced by Crusaders. It would be a useful item for a tinker travelling the roads. In heraldry a budget is a small bag regardless of contents. The “Doxy” mentioned in the Tinker’s song was the unmarried mistress of a beggar or rogue so Nell could have been that, but she might just as easily have been his wife. It is also notable that in the sign the Tinker is carrying a kettle, an item that is referenced in the bawdy songs.

Nell has been associated with Nell’s Well in Newton Lane but there is no evidence to make this connection. Indeed, if Nell was a Doxy and so travelled with the Tinker it would be unlikely that a specific well would be attached to her. More likely that a particular Nell took responsibility for maintaining the well in Newton Lane.

When the Inn closed in 1860. It was owned by the Longuet Higgins and so the sign was transferred to the Abbey where it was stored. When the Longuet Higgins sold the Abbey in 1919 the sign was given to Mr Wright in Mill Lane where it resided in a barn. In 1951 a local journalist, visiting the village, learnt of the old sign and, with a little bit of detective work tracked it to Mr Wright. On learning of the board’s heritage Mr Wright sold the sign to Luton Museum where it is now on display at the Stockwood site.