Before the “model” houses were built

Evidence shows that in the 1400s there was a small chapel on the bridge which crossed the River Great Ouse at Turvey. This chapel was dedicated to Our Lady (the Virgin Mary) and doubled up as a toll booth.  The chapel is often referred to as the Lady Chapel. Later paintings by John Higgins provide further evidence of this chapel. Thus “Ladybridge” was coined as a combination of Lady and Bridge.

We can get a sense of what the village was like before Ladybridge Terrace was built in the mid – nineteenth century from the writings of John Burgon, who was Dean of Chichester and brother-in-law of Charles Longuet Higgins. He recorded that when he first entered the village in 1832 from the Bedford Road, “at noonday it was literally as dark as night” with the road on each side “so thickly planted with forest trees that you seemed to be passing through a thick wood” (Burgon 1889).

A need of better dwellings

In 1908, The Reverend George Munby, then Rector of Turvey, quoted Dean Burgon who wrote in 1889 “The public way, when I first knew Turvey, was skirted by tenements – low, thatched, comfortless, and often dilapidated – which were hovels, rather than cottage residences; many of them carrying, on their front, evidence of their probable history –  namely, that they were the architectural efforts of their first occupants.”  Reverend Munby wrote that the “need of better dwellings was obvious to all, and had been greatly emphasised by the disastrous presence of cholera in the village, and by the tendency to consumption, only too common in many families.”

In 1832 Dean Burgon arrived in Turvey from Bedford. Had he travelled from the other direction and crossed the bridge over the river, he would have seen to his right the impressive building which is now the called the Three Fyshes Inn. On the left was the parkland for Turvey House.  The main entrance gates were almost opposite ‘The Fishes Inn’, as it was then called. These gates are still there although the entrance has been moved. Beyond the Fishes Inn the appearance of the village deteriorated. There was a jumble of primitive, tumbledown cottages, built very closely together.  Like the Inn, the houses would have been thatched. Sometimes straw was used, or reeds, and, on occasions, the only material available was long rye grass.  Where the thatch was worn, or the roof collapsed, anything available was used to patch it up.

The heart of the village itself, however, was centred round the church, up a rough road to the left of the main road. The track leading right from the village crossroads led then, as now, to Newton Blossomville, but the track was said to be in a very poor state of repair.  The cottages around the crossroads were built right up to the roadway. They were crowded together and quite dilapidated,  as were those near the church, and in Hoggs Lane, where Joseph Bell and his family lived.

An open brook ran beside the main Bedford to Northampton road through the parkland of Turvey House and emptied into the river. It was crossed by a primitive bridge near the crossroads, where it now runs underground. The water from this brook supplied the small cottage industries in the village, such as the Lace Makers. It was also used as an outlet for sewage.  It is not surprising that a report from 1832 says the village was overrun by vermin.

The original “crude” cottages were all rented out.  A Cottage Agreement dated 1832, in the Bedfordshire Archives, says that the rent was £6 and 10 shillings payable annually.  One month’s notice was required from either side before vacation.  It says, “The Tenant shall properly cultivate the garden, and keep and leave the said premises in a neat and proper state, to the satisfaction of the LANDLORD”.  Rates were also paid by the tenant.

“Model” cottages being planned and built

Dean Burgon wrote in 1826, that his brother-in-law, Charles Longuet-Higgins, secretly “set before himself three great objects for his after life”.  The first concerned the church, the second was to re-build the cottages on his paternal estate, and the third was to erect new schools in the village

Charles Longuet-Higgins planned and funded new housing in the village in the years between 1850 and 1869. Reverend Munby said of Ladybridge Terrace “There is no part of the village which is more improved than this.  In old days, the cottages came from this point, all the way to the river, quite down to the road, with no gardens whatever in front of them.  In place of these stands, as we all know, the picturesque and commodious row of houses with their long and well-kept gardens, extending all the way from Nell’s Well at one end, to the houses opposite the Gasworks on the other.”

The design of Ladybridge Terrace

Ladybridge Terrace was built as nine cottages forming an L-shape with the shorter arm along Newton Lane where it meets the main road to Bedford, and the longer arm along Bridge Street, now part of the A428.  In 1889, Dean Burgon wrote that these cottages were “built in raised terraces and provided with every requirement for decency and comfort, as well as furnished severally with a small garden.  Turvey, has in fact become a model village”.  In the 20th century, “Historic Environment Record – 4827” used the addresses 1-9 Bridge Street to describe the terrace.   The buildings are recorded as “ A 19th century terrace of nine estate cottages”.  The description says “One forming projecting gable wing to N end and two in rear ‘wind’ at E end.”  The walls consist of coursed limestone rubble.  Each is two storied with slate roofs, two “casement windows with glazing bars” and has a “central open-gabled porch”. 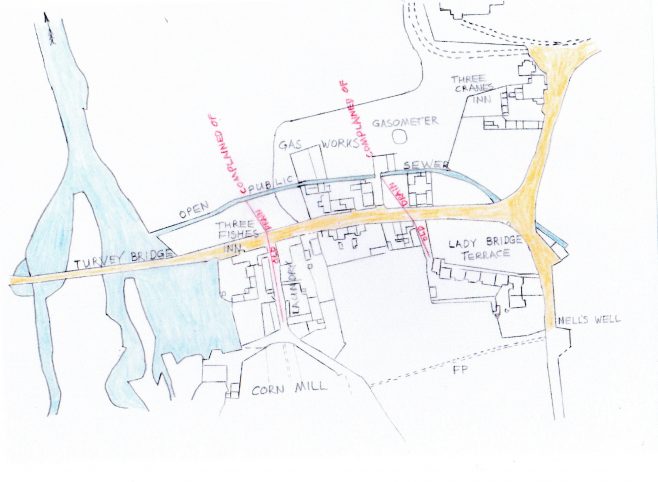 Design and layout of cottages:  original and changes 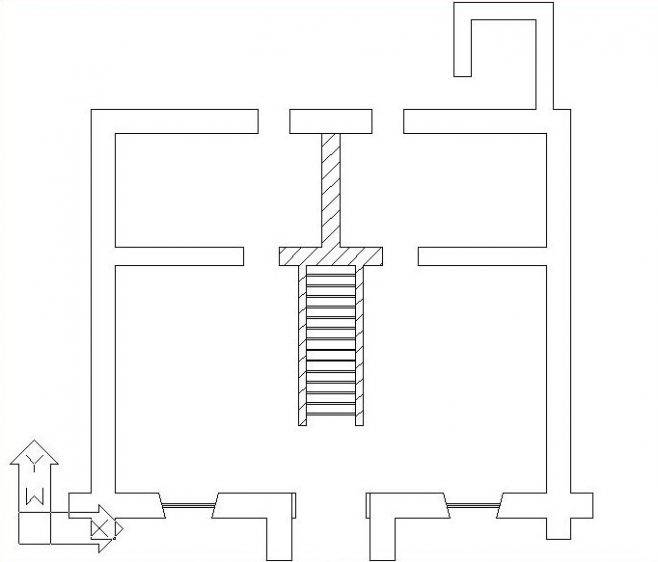 Plan of Cottage in Ladybridge Terrace

Ladybridge Terrace numbers 1 to 9 were not all the same.  A number had more than two bedrooms.  Over the years, extensions have been built on the backs of the cottages whilst preserving the façade ‘in perpetuity’.  Some of the cottages have had the slate roofs replaced at the back whilst the front remains untouched.

The Terrace was built up the slope from and roughly parallel to, the course of the Lady Brook, starting from where the old blacksmith’s forge used to be.  Malcolm Church (Village Voices) pointed out that the houses were deliberately built over the fresh water spring running from Nell’s Well to the river for access to fresh water.  The brook is visible where it passes under the A428, runs through private gardens, then goes underground, finally feeding into the River Ouse.  Dave Hilson (Village Voices) recalled his boyhood friends daring him to walk in the brook under the main road.

Terrace life in the 19th and 20th centuries

Life was hard in the early days and many women took in washing.  Originally water was drawn up from Nell’s Well, but after the new terrace was built over the course of the spring, the pumps were in their back kitchens.  Malcolm Church (Village Voices) had taken one of them out.  “I knew they had hand pumps, and I actually took the last one out in 1982.  They were attached to a lead pipe that went down to the spring.  I was a builder.  We were renovating the kitchen.  The pump was up on a stone workbench and the water would go into the basin next to it.  The pump was cast iron with a lever and they used a leather washer.”  Malcolm explained “it’s like a flange.  When you lifted the handle the plunger went down, and when you pulled or pushed it down, the plunger would come up, like a valve.”  Malcolm knew that after Nell’s Well, and after running under Ladybridge Terrace, the water “goes into the river through the Fyshes cellar”. 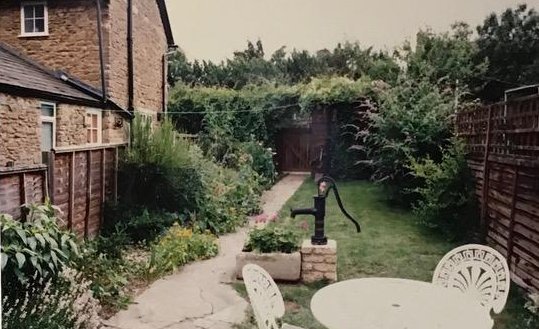 Pump in the garden of a cottage in Ladybridge Terrace

In more recent times, the inhabitants of Ladybridge Terrace used to sit by their front doors and watch the world go by.  As a result the terrace was nicknamed “Gawp Row”.

On the corner opposite Ladybridge Terrace in Newton Lane was the village smithy the site of which was used for new housing in 1994. 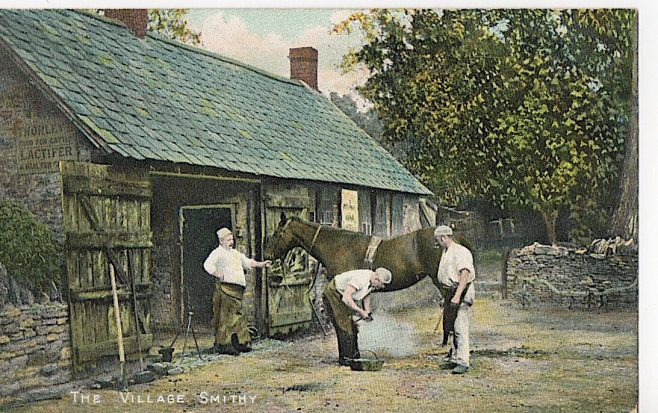 Having originally offered rental accommodation, cottages were gradually sold with the last one ceasing to be rented in 2018.

Drawings of the house plan and “map with open sewer” created by Trevor Reeve based on documents held in Bedfordshire Archives, Bedford

Anjum Gray with some additional material from Paula Grayson