Nell’s Well is on Newton Lane, next to Number 1 Ladybridge Terrace (the article Ladybridge Terrace provides further information).  Sources suggest the natural spring was first described as a well in the 1600s, when Newton Lane was a donkey track leading to Newton Blossomville.  Reverend Munby called it the “best and most lasting of the wells of fresh spring water in the village” (Munby, 1908).  He said the well was named after a tinker’s wife “this old wife gave her name – doubtless from the excellent use she made of it.”

Reference is made to “Nell” in the poem, ‘The Tinker of Turvey” the first known printed copy of which is dated 1630 and kept in the British Museum.  “The Tinker of Turvey, his dog and his staff, Old Nell and her budget, would make a man laugh”.  An inn sign from the Tinker of Turvey Inn, has a painting which is assumed to be the Tinker and his Nell with a dog.  Nell has a bag on her back, the “budget”.  Reverend Munby was not clear about the “budget”.  Dictionaries explain the word was first recorded in 1432 as the Middle English bouget meaning a leather bag, borrowed from the French word and originally from the Latin bulga meaning a little pouch or knapsack.

It is possible the spring was once named St. Mary’s Well.  Uploaded information in 2004 on a website devoted to holy wells, cites R.C. Hope’s “Ledgendary Lore”, mentioning a St. Mary’s Well in Turvey.  “I’m not yet sure whether this is the same well, but it is situated in Newton Road, on the way to Newton Blossomville”.   This might correlate with references to the small chapel dedicated to Our Lady (the Virgin Mary) on the bridge.

Nell’s Well in the 19th and 20th centuries

Nell’s Well and “Old Nell”, seem to have been well known by the nineteenth century.  Reverend Munby wrote “In a southern direction from The Cross, the road now leading to Turvey Cottage, was, in the old days barred by a well-known Toll Gate, which stood in close proximity to Nell’s Well.”  Alfred Russel Wallace, in addition to recording his thoughts in his book “Contributions to the Theory of Natural Selection”, enjoyed his work as a 15 year old assisting his brother in and around Turvey in 1838, laying the main lines for a “survey of the tithe commutation of a parish”.  For about six months he stayed in the Tinker of Turvey inn (now Central Stores), talking with local farmers.  Near the well, he met a young “H.H. Higgins” shooting two wild swans in full flight.  In 1889 when visiting Liverpool to deliver lectures, he was invited as a well known naturalist to meet the now Reverend Hugh Henry Longuet-Higgins to talk about the latest theories.  Together they recalled their earlier meeting, resulting in being asked to confirm the incident to the Reverend’s family on the following evening after the lecture.  In his “My Life” book, Wallace set out competing theories about the origin of the inn sign with the picture of Old Nell.

In 1873, Colonel Higgins of Picts Hill arranged for the pump to be restored, including having the arch constructed over the pump.  In 1875, he commissioned the carved inscription on the wall plaque.

O fountain pure, whose spring so sure
Has never yet run dry:
Thy water tells of deeper wells
Which living streams supply.
Thy spring, though pure, no thirst can cure,
Who drinks, will drink in vain:
Go neighbour, try that deep supply:
Thou ne’er shall thirst again.

Malcolm Church, (Village Voices), born in Turvey, later returning to be a repository of rural recollections, explained “There’s a fresh water spring runs from Crown Farm, through the garden of my grandfather’s house, and there’s a well in the garden and the water is about a foot from the top all year round.  It comes down from Crown Farm, and comes to Nell’s Well, and turns and goes along under Ladybridge Terrace, and out into the river through the Fyshes cellar.  When there was a lot of rain in places like Aspley Guise, the freshwater spring used to flood and it would flood the Fyshes cellar.”  This was a major issue for the pub, particularly when the cellar contained their micro-brewery in the late 1980s.  Malcolm explained “Well they have blocked it off in the Fyshes cellar because it was a problem but it still comes out”.

In 1940, the Mercury and Herald reporter for the section “County Parade”, said Turvey people were very upset.  Bedford Rural Council reported to Turvey Parish Council that the water was “bacteriologically unfit for drinking”.  Their engineer and surveyor Mr D.T. Matthews had carried out a routine inspection.  He said the well would not have to be closed outright.  “It will merely have a notice by it warning people that they drink there at their own risk.”  The Chairman of the Parish Council, Mrs Rupert Allen, declared “There will be an outcry if we close it”.  Mr Matthews explained “We are not preventing anyone using it and the only reason we have not tested it before, in all these years, is that we never knew there was a drinking well there at all.”  The reporter noted people enjoyed the crystal clear water so much, they filled bottles to take to their friends in Olney.  Mr George Tysoe, a village resident, was quoted “If the waters are so impure why hasn’t it struck me down over the years?”  I am “alive and kicking to tell the tale”.  Mr Matthews commented “Perhaps its water is more palatable than the mains and perhaps the residents have become immune over the years, but it could harm a new resident.”

In September 1960, environmental staff in Bedfordshire Rural District Council declared again that the water was “unfit for drinking”.  People were advised to cease using it.  The builder, stone mason and church warden, Len Savage (the Savage archive provides further information), explained the estate houses had previously been supplied with mains water by the Reverend Hugh Higgins.  People in Newton Lane, Mill Green and Ladybridge Terrace claimed the mains water was “not as pure as that of Nell’s Well”.  They organised a protest against the council decision with 170 people signing a petition.  Len wrote about the BBC outside broadcast unit arriving with “special reporter Fyfe Robertson to cover the story”.  For the Tonight programme, BBC staff expected Robertson “our roving reporter” to travel across Britain “providing serious stories as well as finding some remarkable eccentrics”.  Len wrote “Our workshops and builders’ storage yard were at the bottom of Newton Lane and so it fell to us to offer the use of our facilities to this influx of media personnel.  Some of the women from Ladybridge Terrace supplied tea and cakes and one of our work benches became their table”.  So many people gathered to watch the broadcast they had to close off Newton Lane to traffic.  The brother of Malcolm Church (Village Voices) was seen on the television transmission behind the reporter, playing with Clive Williams.  Residents continued to drink the water with no apparent ill effects.  Malcolm confirmed that before the age of 11, when he was playing in the village and needed a drink, he used the pump under the arch, “the pump was fixed to the wall at the back.  It was in a wooden case and there’d be a handle at the side and you’d just pump it.” 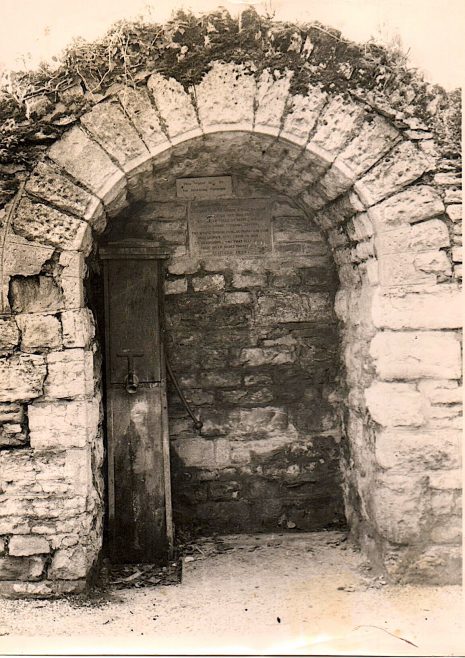 The pump gradually fell into disrepair between the mid 1960s and 1980’s, with “odd pieces missing” noted Len Savage, builder and church warden.  “I decided to try and salvage what I could and stored it all in one of my buildings.  Before retirement, Len moved the “large and heavy pump” to his garage where he “kept tripping over it”.  Talking to Barry Parker, Chair of the Parish Council, Len asked if there was any interest in restoring the pump and archway.  With encouragement, he rebuilt the pump to restore it in the original position.  Barry arranged for repairs to the stone work and provided a new iron gate for the front.  The restoration ceremony was held on 4 December 2004. 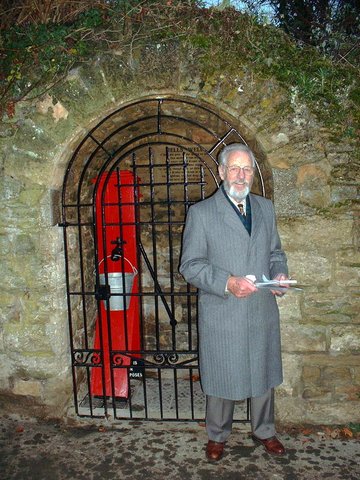 Mercury and Herald, 30 September 1940.  So Sweet Nell of Turvey is not so sweet after all.  County Parade.  Bedford.