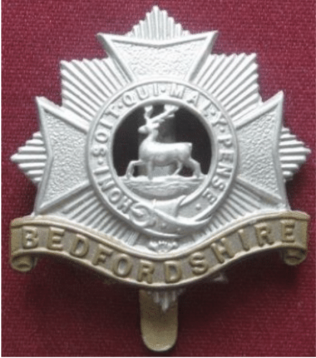 zoom
Badge of The Bedfordshire Regiment

During World War I, the regiment raised 21 battalions (500 to 600 men); quite an achievement for one of Britain’s smaller counties. It fought on the Western Front in France and Belgium but also saw service in Gallipoli, Palestine, India and Burma. It was awarded 74 battle honours, 7 Victoria Crosses and suffered 6,500 casualties.

Turvey men on the village war memorial served in the 2nd, 4th and 8th Battalions. The 2nd was a regular army battalion raised in 1858 and was in South Africa as World War 1 began. It spent its entire war on the western front as part of the 30th Division, moving to France in September 1914 and coming back to Britain in April 1919. The 4th Battalion was raised for the duration of the war and went to France in September 1916 as part of the 63rd (Royal Naval) Division.

The 8th Battalion was raised as part of Lord Kitchener’s K3 (or New) Army inOctober 1914. After some home defence duties around east coast ports it went to France in August 1915. It was disbanded in February 1918 with men transferring to the 2nd, 4th, 6th and 7th battalions.

Just one year after the end of World War I, in 1919 it was amalgamated and became the Bedfordshire and Hertfordshire Regiment. Reductions in the size of the army in 1958 meant a further amalgamation with the Essex Regiment.

This was closely followed by the emergence of larger infantry regiments in the British Army and the regiment then became absorbed into the present day Royal Anglian Regiment alongside the old county regiments of Northamptonshire, Leicestershire, Lincolnshire, Cambridgeshire, Norfolk and Suffolk