You are here: HomenextTopicsnextTurvey Through TimenextThe Shaping of Turvey: Saxons to Enclosure

The Shaping of Turvey: Saxons to Enclosure 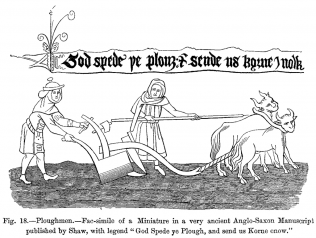 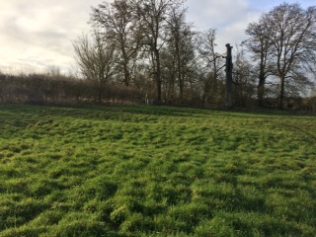 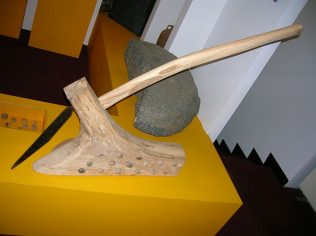 All Saints Church gives us our first easily accessed glimpse of what was here before.  When we go beyond the south aisle into the back of the church we are entering what was the old Saxon Church building – and we can still see its remains, its roof line and some of its window arches there is also Saxon stonework on the outside of the tower.

It is possible that there was an earlier church on the site – either of wood or stone – but of that there is no evidence.  Nor is there evidence of where the people who used the church might have lived.  Any archaeological evidence of Saxon vernacular building is usually through post holes in the ground – and if the settlement was based where the current village centre is now, it is long gone or just buried very deeply!

Saxon home life wouldn’t have been a very comfortable existence by our standards.  The houses were usually very small and dark, and apart from the Lord of the Manor, would have only one room.  The fire for heating and cooking was generally in the centre of the room and the smoke exited, not through a hole in the centre of the roof, for obvious reasons, but through a triangular hole in the eaves at the end of the building.  There are a number of reconstruction sites in England that may may be visited.  The Yorvik centre in York, for example, and although that was part of the Danelaw, living conditions would be very similar.  The beautiful big airy church must have been like heaven itself!

The other evidence of Saxon life in Turvey is, however, something easily seen in the village every day The open field farming system was brought to this country by the Anglo Saxons – amongst some Germanic tribes there is evidence of its use as far back as the first century AD.

How on earth do you see the open field system here in twenty first century Turvey – well, quite simply by the ridge and furrow markings in the fields in the village.  One good example is to walk along the footpath at the back of The Green towards Jacks Lane and look to your right.  Aerial shots of land near Picts Hill, however, show it more clearly.

Why did the open field farming system leave its mark so indelibly on the landscape of Turvey?

In any area of land that is continuously cultivated putting heart back into the soil is important. Land in the village would be divided into three large open fields.  Then, within these fields, each member of the community was allocated some land on which to grow crops – always the same crops and with everyone growing the same crop in any one field.  One year it would be wheat for bread, the next year barley for beer and the third year it was left fallow – maybe the animals were let lose to hoover up the remains of any crops and to provide a bit of natural fertilizer, but that was the way it worked – for centuries – in Turvey and throughout Europe.

But why the ridge and furrow? That had to do with the way the land was ploughed using a mould board plough as shown above. The plough was quite difficult and unwieldy to use – especially when pulled by a plough team, possibly seven of eight oxen in the early stages.  So, the plough went up one side of the furrow, was generally dragged round a wide turn at the top, and went down the other side, each time turning the earth to the right, or to the centre.  Thus, over time, the soil became heaped in a ridge with a furrow between each furlong (or furrow long) strip.  It was at least, good for drainage.

The picture of tenth century Turvey is one of people, living in their small timber framed and thatched huts, eating bread and drinking beer – or more properly Ale – perhaps collecting some spring water but not for drinking – growing other food stuffs such as peas, beans, carrots, onions, parsnips, and a great many herbs for flavouring and medicinal purposes.  Perhaps keeping a pig on the common ground and in the woodland where they could feast on acorns in the autumn.  Maybe the better off peasants would keep a cow on the common land for milk, butter and cheese.  Fish from the river was good too – and wild animals were hunted – there is evidence of badgers being killed and butchered – and of course hares and rabbits and deer. And we know where at least one of the arable fields was situated by the remains of the ridge and furrow.

It is difficult to find very early evidence of the field names in Turvey.  The pre-enclosure map of 1783 provides the best guide.  This was drawn by Richard Gee, a noted map maker of the time, who lived in Turvey.  It was probably drawn up for those wanting to enclose their land.

The pre-enclosure map also shows a large number of small parcels of fenced land near to the Drover’s Road known as London Lane – now a small footpath leading off the main Bedford Road almost opposite Priory Farm. These had obviously been enclosed earlier.  Perhaps even in Elizabethan times but it is difficult to see that they would have been big enough for anything other than ‘smallholdings’. Perhaps they were used as we might use allotments today – certainly they are not large enough to have been used for sheep farming or parkland.

The laws of ‘ownership of land’ throughout history are quite complicated and don’t really fit with our modern ideas of ownership.In Saxon Times and after the Norman Conquest all land nominally belonged to the King.  He portioned this out to those whom he wanted to reward and who would offer armed support should he need it.  They in turn divided their landholding up between sub-tenants.  Each was expected to offer something in return.  If the King asked the Tenant-in-Chief to provide fighting men, his under tenants would be expected to go and fight. This was the Feudal System.

The Domesday survey completed in 1086 gives the name of all the land holders in Turvey both before and after the Norman Conquest of 1066.  It also tells us how much land each had to farm. In 1066, the Principal Landowner is listed as King Edward (Edward the Confessor) but the Bishop of Lincoln and Alwold of Stevington also appear as Overlords.  It is not surprising that the Bishop is listed as a main landowner, the Church often ‘owned’ land.

By 1086 the names of the principal landholders have almost completely changed to reflect the rewards granted by King William I (William the Conqueror) after his victory in the Battle of Hastings in 1066. The King is no longer listed as the Principal Landowner.  His name is replaced by the names of the Overlords or Tenants in Chief. They were Bishop Geoffrey of Coutances, Robert of Tosney, Nigel of Aubigny, Count Eustace of Boulogne, Hugh of Beauchamp, Bishop Odo of Bayeux, Walter of Flanders and Alwin the priest.

These are Norman names so it is likely that the land in Turvey was used as a political tool to control the local Saxon population.  Since the value of the land diminished between the conquest in 1066 and the Domesday survey in 1086 we get a clue that the villagers living in Turvey at the time didn’t take too kindly to their new masters!

By the time of the Parliamentary Enclosure Act in 1783, the principal landowner was Lord Mordaunt, the Earl of Peterborough. The family had acquired land in the village over many years by a number of means, including advantageous marriages.  Much of his land was let out to tenant farmers.  The family didn’t even live in the village; they had moved to Drayton House in Northamptonshire and the Old Hall, now where Turvey Hall farm is built, was derelict.