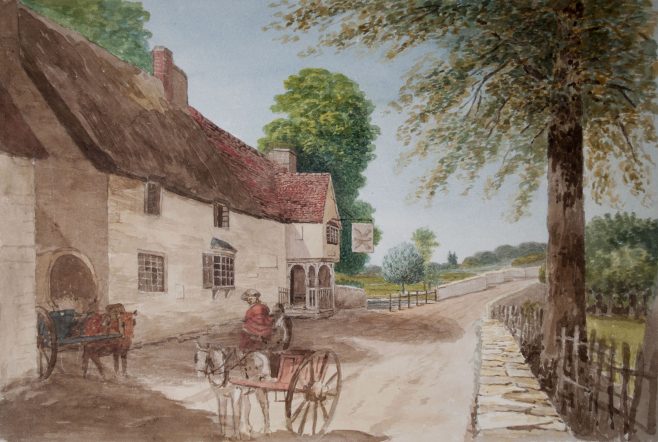 Looking at the old and new maps, while some areas of the village were re-modelled (the article Ladybridge Terrace provides further information), the immediate surroundings of this long-standing inn have scarcely changed.  Across the road from the inn can be seen what is believed to be a former entrance drive to the original Turvey House.  It is thought that the access roads were moved during the 1830 improvements, leaving only the pillars and iron gates as evidence of a drive to some building. 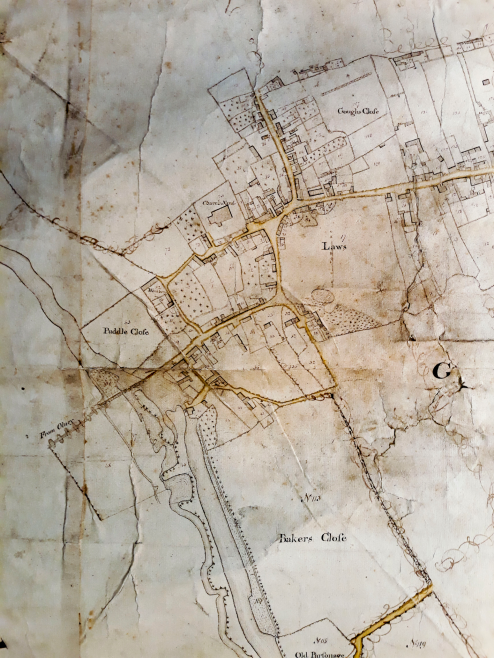 This part of the village has been subject to many floods, shown by the marks on the inn wall indicating dates and heights of floods.  The field across from the inn is called Puddle Close which can be seen in the pre-enclosure map.  The article Nell’s Well provides further information about the pub cellars flooding when the flow increases from the spring which feeds Nell’s Well.

The first self-declared “Tourist” visited Turvey in 1793.  Colonel John Byng’s diary entries noted by Howard Kent in Turvey News explained that on 20 August, he was “hungry and faint”.  In his journal he wrote

the day had been warm and my ride distressing.  So I felt glad to find a decent-looking public house, the Three Fishes, which I enter’d, leaving my horses at the door, and regaled with good bread and cheese, brandy and wine.

This I should fancy a good fishing spot from the look and twine of the river.

Dean John William Burgon in his chapter on Charles Longuet-Higgins in Volume 2 of the Lives of Twelve Good Men included stories about Turvey’s regular sights between 1832 and 1885.  While Burgon’s paid role was religious and academic, he wrote about events which he found amusing or surprising with occasionally quite critical comments, particularly if he felt those people behaved somewhat in a vulgar way.  His comment about a Curate from a neighbouring village explained that this visitor:

on coming over to Turvey on Sundays, used, between morning and afternoon Service, to halt at ‘The Three Fishes’, (an old inn near the bridge): to take his repose in the porch: and there, in his shirt sleeves, and in view of all passers-by, to refresh himself with bread-and-cheese and a tankard of ale, having first suspended his wig on the top of his walking cudgel, and deposited the latter against the wall.

The same individual, (really a worthy and respectable person) was overtaken by the Bishop of the diocese walking from Turvey to Bedford one hot day without his coat (which he carried on his arm), and singing lustily ‘My friend and pitcher.’  The Bishop from the carriage window, “I congratulate you, my friend, on being in such good voice!”

In addition to refreshing at least one tourist and the Curate, The Three Fyshes provided a historically important room for those people involved in the petition for enclosure.  The article Enclosures in Turvey provides further information about that meeting.