Stories in the Landscape: The Early History of Garden Field and its Surrounds

If you had set off 250 years ago to walk from the centre of the village along what we now know as Newton Lane, then a rough track, you would have found yourself walking along the edge of an enormous treeless arable field, known as Garden Field. This huge area, seen in the 1783 pre-enclosure map below, was one of the two open or common fields surrounding the village. The other, Gravel Field, stretched to the north of the village. Garden Field would have measured just over a mile from west to east and about half a mile north to south. 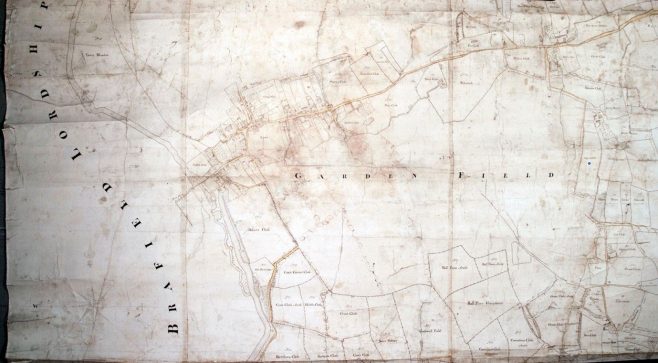 Part of the 1783 Pre-Enclosure Map (by kind permission of Bedfordshire Archives).

In the 1780’s the landscape around Turvey was about to change fundamentally as a result of Enclosure. However, before 1783, the appearance of this huge open field would have changed little, probably from Anglo-Saxon times, having been farmed continuously in the same communal way. Evidence from nearby Northamptonshire, suggests that open field farming in this part of England was established in the eighth or ninth century.[i] The field would have been divided into blocks called furlongs, with villagers, as tenants of the landowner, being allocated blocks of land in various parts of the village. Each year the whole field would have been planted with the same crops, probably wheat, rye or barley, or left fallow for the ground to recover. The article Turvey’s Farming Past explains more about the open field system.

As can be seen in the map, Garden Field stretched from the village all the way to Priory Farm and would have included what is now Abbey Park. Whilst Garden Field no longer exists, its remnants can still be seen in the landscape today in the ridge and furrow visible in Abbey Park. The ridges were caused by centuries of ploughing with a mould board plough, the soil being pushed to one side as the plough, pulled by oxen, moved up and down the field (see article The Shaping of Turvey: Saxons to Enclosure). 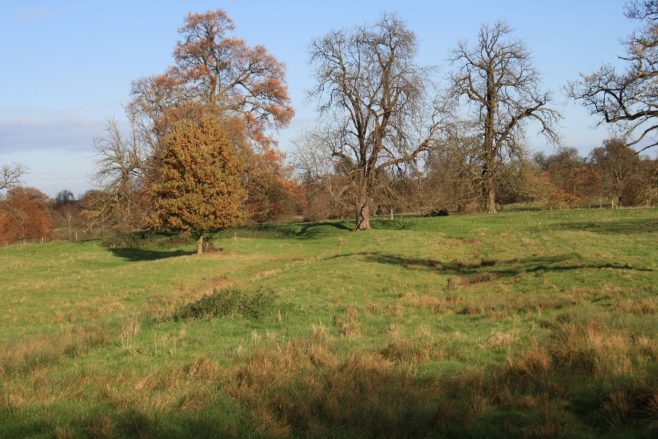 Ridge and Furrow in Abbey Park.

It is not known how Garden Field got its name, although it was known as this at least as far back as the 16th century. A document, preserved in Bedfordshire Archives, records the conveyance of six acres of land in various areas of the parish from George Skevington, husbandman, to Anthony Norman, yeoman.[ii] Garden Field is mentioned in this transfer which took place in 1599.

Clues to the past in the smaller fields

Around the edge of Garden Field in the 1783 pre-Enclosure map can be seen smaller fields, these would have been areas of land already enclosed with walls, fences or hedging at earlier dates. Although we don’t know the origin of the name of Garden Field, the names of some of these smaller fields give clues to their history. For example, to the south of Garden Field are three fields named Hall Pieces (

on the map below). These and the other fields stretching to the south and west of here are close to where Turvey Hall once stood, in the vicinity of where Hall Farm is now (the building in Hall Yard,

on the map below). 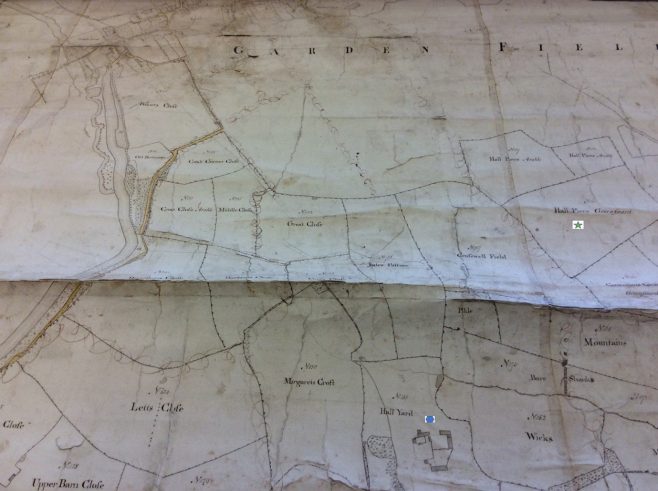 Part of the 1783 Pre-Enclosure Map showing the former location of Turvey Hall, where the building in Hall Yard, now Hall Farm, is indicated. (By kind permission of Bedfordshire Archives).

By the time of the 1783 map the Hall had long since become derelict and its stone had probably been used to build Hall Farm. The photograph shows part of a barn at Hall Farm and the central raised stone in the wall is thought to be from the former Turvey Hall. 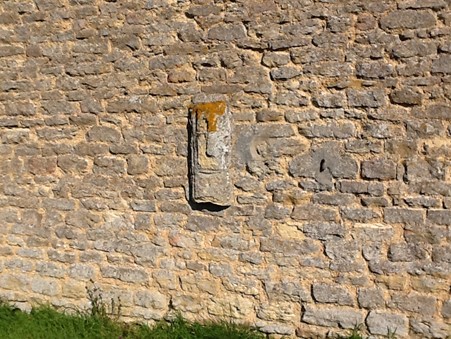 Part of a barn at Hall Farm showing what is thought to be a stone from the former Turvey Hall.

Turvey Hall had been the home during the medieval period of the lords of the manor, the Mordaunt family. It was somewhere here in 1372 according to a contemporary document, ‘Inquisitions Post Mortem’, that Edmund Mordaunt “killed Ellen his wife at Turveye while insane, and on the same day drowned himself while insane in a pond at Turveye”.[iii] By the 16th century, however, the Mordaunts had made Drayton Manor in Northamptonshire their main residence.

The pre-enclosure map shows that the smaller enclosed fields cluster near to the former manor, around the village, along through routes or around outlying farms.  It is likely that these areas of land would have been fenced or hedged in a piecemeal fashion over the preceding centuries. Often this would have been for the pasturing of livestock where proximity to homes or access routes would have made for more convenient animal management. Ley Close (  on the first map) on the eastern edge of Garden Field, situated near Elderswell Farm, is likely to have been an example of such a field. The word ley derives from the Old English word, læs, meaning pasture or meadow. Old English was spoken in Britain between about 450 and 1150 AD. Particularly after the Black Death (1348-9), labour shortages encouraged the conversion of land from arable use to less labour intensive and more profitable pasture for livestock

Most of the village cottages usually had small plots behind them where people would have kept a pig or chickens, or, less commonly, a cow. The larger fields near the village such as Goughs Close, Sharps Close and Townsend Close may have been associated with one of the farms near the village, the names of the former two perhaps hinting at the names of the owners of the land at some time. The name of Townsend Close reveals what would have once been viewed as the end point of the village.

Bakers Close will be familiar to 21st century Turvey residents as a housing development, but, as can be seen on the map, this was the ancient name of the field on which the houses were built. The article Turvey and Field Names gives some clues as to the origin of this particular field name.

Of particular interest is Laws Field, the area now occupied by the village hall, the houses on the Green and the paddocks behind. A newspaper report in 1907 gives an account of a talk in Turvey by Henry Longuet Higgins in which he refers to the Laws field being known as ‘the Hlaws’ in earlier times and having been the site of a folkmoot (a meeting of the people). The account does not indicate the source of Mr Longuet-Higgins’ information, but a consideration of the meaning of the word ‘hlaw’ lends some support to the idea that this area of Turvey could indeed have been the site of an ancient meeting place.

In Old English, hlǽw or hlāw meant mound or burial barrow.[iv] Community meetings were an important feature of early medieval (Anglo-Saxon) local administration[v] and were generally held in the open, often at prominent features in the landscape. Research has shown that mounds were often the sites for such meetings.[vi] Such mounds were typically either natural elevated features of the land or were man-made constructions, either built especially for the purpose, or, perhaps less commonly, the repurposing of ancient burial barrows. Derivations of the words hlǽw or hlāw, such as law or low, survive today in place names. An example of this is Secklow in Milton Keynes where a medieval meeting mound has been excavated. [vii]

Historians have suggested that raised areas of the landscape were easy to identify and therefore for people to locate, or that they provided a platform to make the speakers at such meetings easily visible, much as a stage at a modern political hustings. Where burial sites were re-used it has been suggested that these were already seen as sites of reverence or importance, perhaps thereby conferring legitimacy on the discussions and decisions made at meetings held there. We have no archaeological evidence of there having been a burial barrow in the vicinity of Laws field, however the land does rise towards the north-east corner of what would have been Laws field so could well have been understood as a mound.  As such, it may indeed have been the right sort of site for the community to come together and discuss matters of importance.

If you are in the habit of walking our local footpaths, some of our these still follow the edge of the old open fields. One example is the path leaving Newton Lane opposite Nell’s Well and heading towards Jacks Lane. Perhaps today’s walkers are following one of the routes trudged by centuries of villagers as they set off across Garden Field to tend their furlongs? It was also part of the old foot route to Bedford. Another footpath, still well-used today, goes south opposite Priory Farm and can be seen skirting the eastern edge of Garden Field on the pre-enclosure map. This was the old Drovers’ Road which you can read more about here.