You are here: HomenextTopicsnextReligionnextAll Saints Church: A Historical Summary

All Saints Church: A Historical Summary 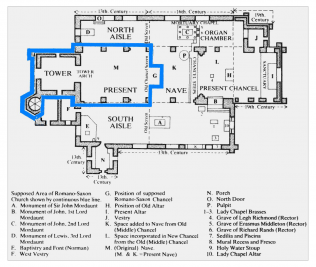 zoom
Plan of All Saints Turvey 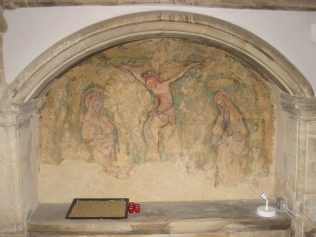 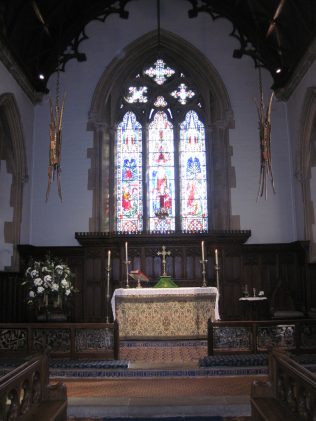 zoom
All Saints Turvey - the Chancel and Sanctuary
Jane Brewster 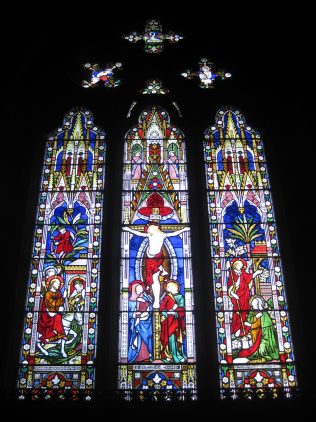 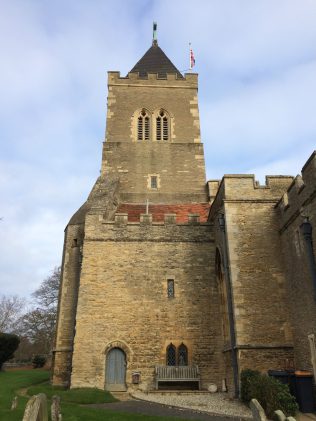 Origins of All Saints

All Saints Turvey is part of the Diocese of St Albans and is Roman-Saxon in origin (the extent of the Romano-Saxon church is outlined in blue on the plan), but the oldest parts of the present structure are Saxon. Since then the church has been continuously developed, through the Norman period (when Turvey was featured in the Domesday Book), the extensions of the 13th and 15th centuries, and the renovations of the mid-19th century.

The South Porch dates from the 13th century and had its height raised in the 15th century. On its west wall is a memorial for the fallen of the First World War. The massive oak church doors are overlaid with rich ornamental ironwork, believed to be the work of the 13th century metalworker ‘John of Leighton’. The stone font is just inside the door, and is thought to be late Norman.

Different parts of the current Nave date from the 10th, 13th and 15th centuries. The Nave roof with its six bays, carved bosses and twelve carved angels, was installed in the 15th century. Above the pillars on the south side are two small rounded windows, which mark the location of windows in the Saxon church built about 980 AD.

The South Aisle and Lady Chapel

The South Aisle was added in the 13th century and leads up to the Lady Chapel. On the right, set in the wall, is a fresco painting of the Crucifixion, showing Christ, Mary and St John. This was discovered when plaster was removed during 19th century renovations.

To the left of the fresco, is the rare trio of trefoiled sedilia. The priest, deacon and sub-deacon would sit in the three bigger alcoves while the smallest held a piscine, a drained basin for washing sacred vessels.

The beautiful altar hangings in the Lady Chapel were made in 2007 by two members of the congregation, Sheila Alderman and Gill Betts, in memory of Enid Wadsworth, a much-loved organist and choir mistress.

In the middle of the South Aisle is the memorial to Sir John Mordaunt and his wife Lady Edith. This is one of four splendid monuments to the Mordaunt family, the leading landowners in Turvey for approximately 650 years, to be found in the church.

In 2017, with the aid of the Heritage Lottery Fund, the pews to the west of this memorial were moved and the space converted to a children’s area.

Victorian Renovation and the Chancel

The Chancel, the two eastern bays of the Nave, the Chancel Arch and Vestry were all added between 1852 and 1854 during extensive renovations carried out by Sir George Gilbert Scott, which extended the length of the church eastwards. Until then the altar had stood, since the 12th century, in the position of the present chancel steps.

In the south wall of the Chancel is the monument to John 1st Baron Mordaunt, son of Sir John Mordaunt, and his wife Elizabeth Vere. The four-manual organ was built by Hill and Sons, and was presented to All Saints by Charles Longuet Higgins in 1855, see All Saints Church Organ.

The Chancel lights, designed by Bernard West ARIBA, were a gift from Mrs G Allen in memory of her husband Rupert (formerly of Turvey Abbey), and the altar rails and the West Screen in the Tower were the bequest of Mrs Emily Osborn in 1972.

The stained glass in All Saints is Victorian. The windows fall into three groups: the ‘picture windows’ with canopy work above (in the Chancel), the ‘pattern windows’ (in the aisles) and the ‘dayspring’ grisaille-glass window above the altar in the Lady Chapel.

The North Aisle contains the third Mordaunt monument, created in 1571 to John, 2nd Baron Mordaunt and his two wives Eleanor Fitz Lewis and Joan Farmer. Further down the North Aisle is the 19th century Turvey Bier. This was used to carry coffins to the Lych Gate, where they were unloaded and carried into the church. At the end of the aisle is the final Mordaunt monument. This was, erected in 1601 as a memorial to Lewis 3rd Baron Mordaunt.

The tower is 70ft (21.5 metres) tall. The foundations to ground level are of Saxon stonework. The next three layers were added at various dates during the 13th century, and further work dates to the 15th century. The fifth and final development came in 1864 when the parapets and pyramid roof supporting the cross were added to restore damage caused by lightning in 1858. The clock was a gift to the Church by Mr George Sargent in memory of his parents, and was installed in 1893.

The date 1593 is inscribed above the door in the tower in the south wall leading to the bell ringing chamber. The Belfry houses a ring of eight bells, the oldest dated 1682, see All Saints Church Bells and Clock.

The Lych Gate at the entrance to the churchyard was erected in 1856 and restored in 1925 in memory of members of the Hyland family lost in a tragic drowning accident off New Guinea in that year.

Adapted by Jane Brewster from the All Saints Church Guide, written by Richard Bray.