You are here: HomenextVoicesnextColin Cotton

Introduction to an interview with Colin Cotton 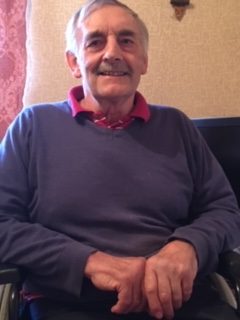 Born in 1946, Colin Cotton was raised in Mill Green, Turvey by his parents, Reginald and Doris Cotton. Both his grandfathers, Samuel Cotton (from Olney) and Thomas Essery (born in Turvey), had carried out general labouring work on the land for local farmers. After leaving school, Doris Cotton had been ‘In Service’, somewhere in Northamptonshire. Reginald Cotton was working at Paine’s farm (Great Oaks Farm), in Turvey. They married in Turvey during 1941, holding their reception at the King’s Arms in Jack’s Lane, Turvey. 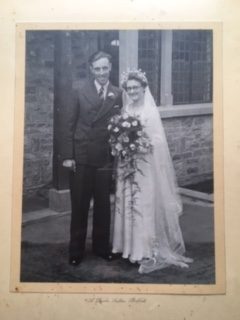 Mrs. Doris and Mr. Reginald Cotton on their wedding day outside The Kings Arms, Jacks Lane, Turvey where their wedding reception was held in 1941.

The family moved to 18 Tandy’s Close, Turvey during the early 1950s and in the late 1950s they moved again, to 28 Tandy’s Close as it had a much larger garden, a useful addition to their allotments for growing fruit, vegetables and chickens. Colin helped his father in the garden and allotments, becoming skilful in growing fruit and vegetables.

Colin recalls the teachers at Turvey Infants School, Miss Harding, Headmistress, and Mrs. Truphet.  Colin attended the Sunday school organised by the Congregationalists as his mother attended services and was a member of the Pleasant Wednesday Afternoon where the ladies enjoyed chatting over a cup of tea. Colin enjoyed climbing trees as a youngster.

Colin moved to Harrold Secondary School where the headmaster was Mr. Hill. The pupils enjoyed a wide range of sports including cross country running, running a section through the then operational gravel pit, now known as Harrold Country Park.  The school leaving age then was 15, and job interviews were arranged for the pupils through the Careers Service. Colin was successful in securing and completing a five-year apprenticeship at the Gas Board, Ford End Road in Bedford. Colin enjoyed the fact that they were out and about and not tied to a fixed location.

Colin recalls the local Policeman, Mr. Pickering and relates an ’encounter’ he and other boys had with the PC.

Now retired, Colin continues to ensure that his garden is as productive as possible.