You are here: HomenextTopicsnextEvents and TraditionsnextOak Apple Day, 29th May 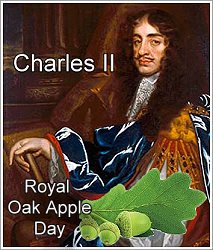 Unlike other traditions, Oak Apple Day (known more widely as Royal Oak Day) has a clear beginning point: it was the day Charles II returned triumphantly to London on his birthday on 29 May 1660, thus restoring the monarchy to England. The day was proclaimed a national day of celebration, and although originally it was given biblical backing to provide religious legitimacy, it was quickly accepted by the general populace and given a more secular and jovial twist.

On the whole, the population welcomed the king’s restoration as a welcome relaxation of Cromwell’s stricter puritan regime; it also signalled a welcome return to other traditions which people associated with ‘merry England’ and the period before the Civil War. Royal Oak Day had a great brand, too: the oak leaf symbolised the time Charles escaped from capture by hiding in an Oak tree in Boscabel.

There are many local variants to the traditional Royal Oak Day celebrations, but we know that in Turvey it was celebrated as Oak Apple Day, because Joseph Bell writes about it in his memoirs, saying that a fair would be held on the village green on that day.

So we know that Turvey celebrated this event, but we don’t really know how, and we don’t know how long it continued. The dominant custom throughout the country was the wearing of sprays of oak leaves and the carrying of oak boughs; in Turvey this would also have included the wearing of the ‘oak apple’, which is the common name for a sort of round, almost apple like gall found on many species of oak, which is caused by chemicals injected by certain kinds of gall wasp larva. The Oak Apple might have been painted or gilded.

Although it was formally abolished as a public holiday in 1859, the traditions associated with Oak Apple Day persisted in some places, although they were mainly carried on by children rather than adults. It was traditional for those not demonstrating their monarchist tendencies to be attacked by their schoolfellows; thus in Northill, Bedfordshire:

it was the custom on 29 May to wear a sprig of oak leaves with an oak apple attached. The boys armed themselves with stinging nettles and challenged all comers with: Show your oak leave or I’ll sting you!” There were few who forgot the oak leaf.

Northampton still celebrates Oak Apple day because it hasn’t forgotten the fact that Charles II gave the citizens one thousand tons of timber from the Royal forests of Whittlewood after a great fire almost destroyed the town in 1675. A garland of oak-apples is laid at Charles II’s statue each year.

The closest evidence we can find of Turvey’s approach to this festival is from nearby Stagsden, where, in 1912:

ROYAL OAK DAY was observed by the ringing the bells at 5 a.m. and the old custom of taking round the oak boughs.

In the absence of other evidence, we’ll have to assume that something similar happened in Turvey; perhaps we’ll find out more in the future.