You are here: HomenextTopicsnextEvents and TraditionsnextA Victorian Christmas in Turvey

A Victorian Christmas in Turvey

What would it be like in Turvey at Christmas in the late nineteenth century? Our idea of Christmases past is influenced by the writings of Charles Dickens, mainly in his story ‘A Christmas Carol’ and in the wonderful chapter from ‘The Pickwick Papers’, Christmas at Dingley Dell. They were both written at the beginning of Victoria’s reign, and many of the traditions we now take for granted had not then been introduced. Victoria became Queen in 1837, Pickwick Papers was finished that year and a Christmas Carol was published in 1843.

They give hints about how villagers in Turvey may have celebrated at that time. Houses were decorated with branches of greenery, but the first known picture of a family around a Christmas tree is that of Victoria and Albert and their family in 1848. By the end of the century, it is likely that most of the larger houses at least would have a tree, lit, of course, by candles. Dried fruits, baked sweetmeats, decorations made from natural objects, like pinecones and leaves, and paper chains were hung on the tree. The wealthiest may have had glass baubles similar to those we know now.

The first recorded Christmas card was made in 1843 for a man called Henry Cole who asked an artist to draw cards for him to send to his friends. This idea became popular and by 1880 well over 11 million Christmas cards were printed and sent out on the new halfpenny postage rate. We can imagine villagers calling in to the Post Office, situated then where the Central Stores is now, to buy their stamps from the postmaster, Gilloway Harvey.

In 1848 a British sweet maker, Tom Smith, adapted the idea of sugared almonds sold in paper twists as an inspiration for his Christmas Crackers. He designed paper twists that snapped apart when you pulled the ends. This was the start of the Christmas cracker, which gradually had added ‘goodies’ like paper hats and mottos, and eventually small gifts.

Christmas in Turvey at the end of the nineteenth century would be different in one respect – Christmas meant Christmas. It began on Christmas Day, not several weeks before. The celebrations were supposed to last for twelve days after Christmas, but most working people would expect only to take off one day – at most two – for Boxing Day, as its name suggests, was the day on which workers and tradesmen traditionally received their Christmas Box – or gift – and many would be back to work to get it.

Christmas customs in the home would probably be as different in different households as they are today. The rich would eat goose, or possibly beef, though turkey grew in popularity during this time. The poorest, perhaps, made do with a rabbit – but it was meat and a celebration! Mince pies gradually lost their meat stuffing and became filled with dried fruits and nuts as we know them now. As today, family was at the heart of the celebrations.

Of course, this is speculation, based on what ‘generally happened’ – no diary, or other evidence, has been discovered about how people spent their Christmas in Turvey. If you know of one, this site would love to hear from you!

What we do know, however, is what families may have been reading by their firesides during the Christmas period. Particularly Annie M Sharman, who, from the census records was probably 23 at Christmas in 1892, when she wrote her name in a book called Home Words for Heart and Hearth; it was the Victorian equivalent of a Christmas Annual. It contained all the Turvey Parish Magazines for the year, bound together with the magazine ‘Home Words’, which was produced by the Revd. Charles Bullock. The parish news for each month of the year is remarkably slim, but Home Words provides all the improving thoughts any earnest late Victorian lady could require.

The parish news throughout the year consists of a copy of the register of births marriages and deaths – in the December edition, three baptisms are recorded – and sums of money raised for various charities and church causes, each with the name of the giver and the amount given. The April edition records the gifts to ‘The Parish Church Warming Fund’. It is interesting to note that The Rector gave twice as much as the next nearest benefactor, so I hope the church was warm for Christmas!

Home Words provides a much more substantial read. It opens with a look back at 1892 in a poem called ‘We Praise and We Pray’. It combines verses of thanksgiving for such things as ‘the sun-ripened fruit and the billowy grain’ and for ‘Hearts that are trusted and trusting and true’ and prayers that would not be unfamiliar in any age,

That the desolate may find shelter and bread,
That the sick may be comforted, nourished and fed,
That the sorrow may cease of the sighing and sad,
That the spirit bowed down may be lifted and glad.

The magazine is written by a clergyman and meant for inclusion in parish magazines, so much of the content is of a religious or moral nature, but that was not unlike many magazines of the time. Much of it is less moralistic than many similar publications; it reflects thoughts and issues that are common throughout ages.

The Editorial begins, ‘Dream on, fair child, dream on! Who has not dreamt as thou art dreaming now? Those dear old Christmases of long ago; how we looked and longed for them! … Oh to be a child again, and dream as once we dreamt of Christmas toys, and Christmas fare, and Christmas love…’ and ends, ‘Let there be a dream of Christmas in every cot; and let the Christmas Carol “Thanks be unto God for His ‘Unspeakable Gift,’” be heard in every Home!’

There are a number of Christmas carols and verses spread throughout the magazine, and a splendid article by The Revd Walter Senior MA, which advises ‘you fathers and mothers to seek Bethlehem with your children on Christmas Day’ and goes on to provide a simplified version of the story of God’s redemption of the world from the fall of man in the Garden of Eden, via Jesus birth in Bethlehem, to the crucifixion and resurrection.

There are general interest articles, including one on Michael Faraday, described as one of the greatest of English Chemists and Natural Philosophers. It is a splendid account of how a child of humble origins could succeed by hard work and diligence – and by being noticed for those qualities.

There are many moral tales, including a paragraph recounting a conversation with Baron de Rothschild who affirms that his ‘three milliards of wealth’ doesn’t bring happiness. Wealth doesn’t secure happiness, that is quite another thing…real happiness at bottom means work’. There is an exhortation to Temperance, which tells us that ‘nearly 7,000 sailors have taken the total abstinence pledge of The Missions to Seaman branch of the C.E.T.S.’ (Church of England Temperance Society). Annie would have been familiar with Turvey Temperance Society and with other local Temperance Societies, as this account in the Wellingborough News on 3rd August, 1878, of the visit to Turvey of the Rushden Temperance Society shows:

CHURCH TEMPERANCE ASSOCIATION—On Saturday last the members of the Rushden branch of the Church of England Temperance Association, and the National School Band, to the number of upwards of 100, had their annual outing. The spot selected this year was Turvey, the beautiful park being kindly thrown open for their enjoyment by the owner, Mr Higgins. After partaking of refreshments in the park the company visited Turvey Church, and, on returning to the park, were cordially welcomed by the Rector of Turvey. The President of the Association (the Rev. J. T. Barker) also spoke, and informed those present that Mr. Higgins had expressed his regret that he could not be present. Tea was served in the museum. Thanks to the President and the Secretary (Mr. Packwood) the arrangements for the day’s entertainment were complete, and much enjoyment was experienced by all present.

There are also charity appeals in the magazine, one, for the Life-boat, which merits a full-page illustration. 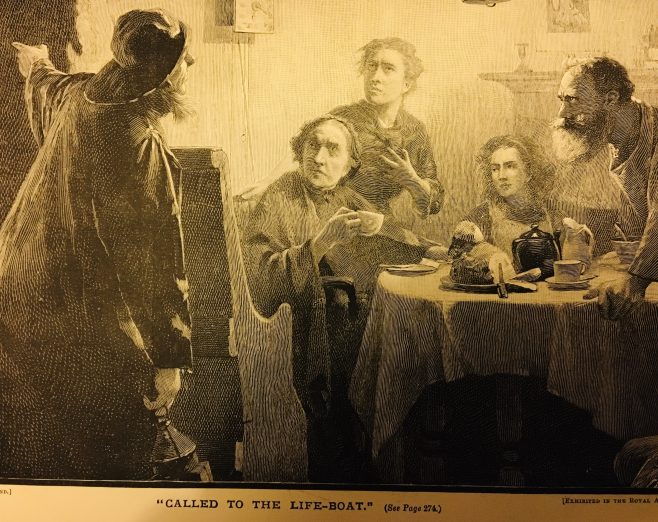 It suggests that Christianity is God’s Life-boat. One charitable appeal is for ‘The London Robin dinners’ and asks for money to be sent to Mr Charles Murray in Bournemouth so that the birds don’t go hungry.

Scatter Out Your Crumbs

1. Amidst the freezing sleet and snow.
The timid robin comes;
In pity drive him not away
But scatter out your crumbs.

2. All have to spare, none are too poor
When want with winter comes;
The loaf is never all your own
Then scatter out your crumbs.

One of the most exciting ‘reads’ is the final episode of the serial that had run through the year. It is called ‘Nature’s Gentleman, or Manners Makyth (sic) Man’. It is about mischievous army officers who, naturally, are awaiting large inheritances, and use their charms and promises of fortune to seduce humble, but pretty, young ladies of the town. Of course, all comes well in the end, just as in the serialisation of many of Charles Dickens’ stories, also published in monthly instalments. The story itself is a splendid mix of Jane Austen and Charles Dickens, with, perhaps, a bit of Thomas Hardy thrown in.

The biggest difference between Annie’s book and a more modern publication is the page designed for children. Called ‘The Young Folks’ Page’, it consists of the words of the carol ‘O little town of Bethlehem’ and ‘Bible Questions on the Church’s year.’ It is not much fun! It also promises sponsorship to churches of £500, for the following year, towards Sunday School prizes for deserving pupils, all, seemingly, to be spent on different ‘Home Words’ publications.

In an age without television or radio, I like to think of Annie, sitting by her fireside in Turvey, reading her magazine by candlelight. At least when she had finished reading, she would understand the true meaning of Christmas.

Jo passed the above article to me and it was a lovely surprise to discover on reading it that she had a book owned by Annie Sharman. In 1892 Annie had lived in what is now my home, Bank Cottage on Newton Lane. Her father George had been a gamekeeper and her mother Maria ran a grocery shop, possibly from the house. In the 1891 census Annie’s occupation is recorded as ‘dressmaker’. She showed early talent for needlework. On the wall of the village hall there is an embroidered sampler completed by Annie when aged ten. Victorian girls were encouraged to work at samplers, partly to develop their sewing skills but also to encourage such worthy traits as persistence, concentration and self-discipline. As Annie’s did, samplers would often contain the alphabet and numbers, so also having an educational purpose. 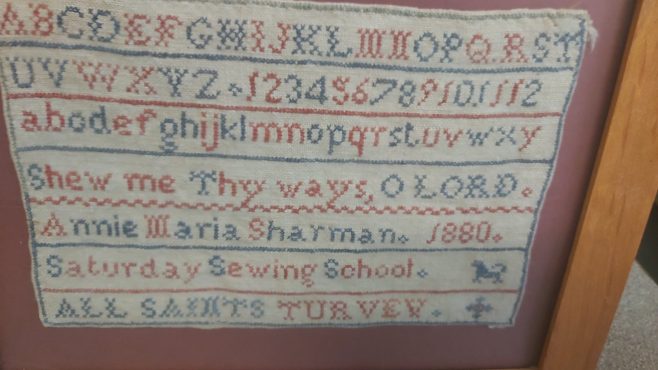 Two years after she wrote her name in ‘Home Words’ Annie left her family home to marry Frederick Lambert Bailey. The Bailey family were carriers, running transport, initially carts and later buses, to and from Bedford and the surrounding areas. In the 1901 census, Annie and Frederick are living in Carlton Rd with their son Frank, aged 6. Annie died in 1937.

Bank Cottage, dating from the seventeenth century, has been much altered over the years. The original fireplace though, apart from the wood burner, is much as it would have been when perhaps Annie sat there and read her book and, years before, her grandmother and aunt had made lace. 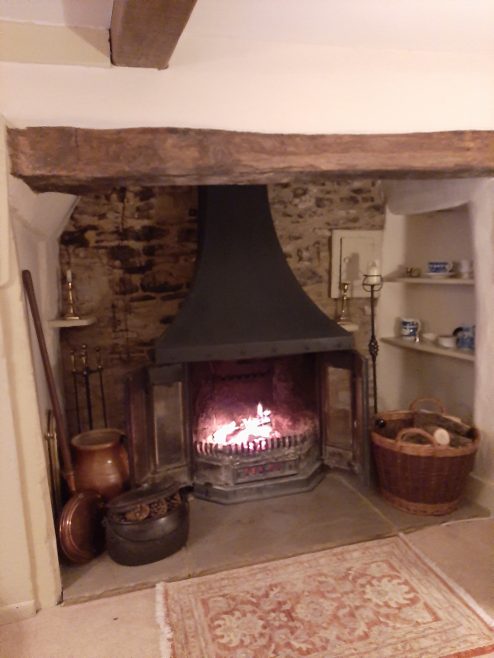 The fireplace in Bank Cottage