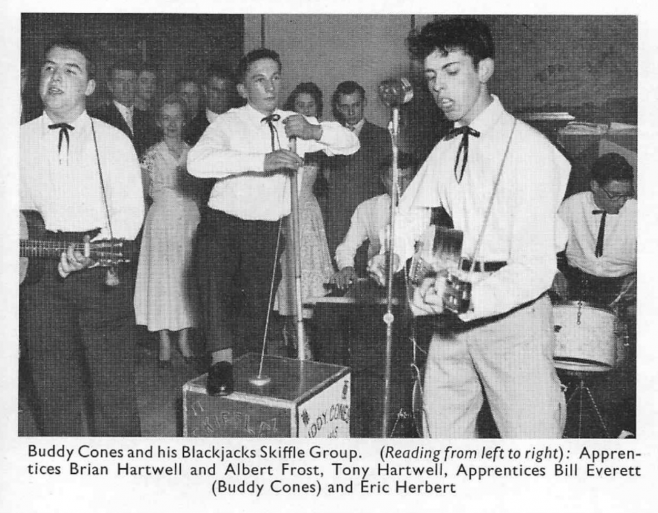 Skiffle was a popular young people’s music genre that originated in the USA and swept across Britain in the 1950s. Its popularity was short-lived but many of the musicians who later became members of famous groups such as Cliff Richard and the Shadows, The Beatles, The Rolling Stones and Led Zeppelin started off in skiffle bands.  As well as guitars, skiffle groups typically included a tea chest bass (a tea chest and a broom handle with string attached) and a washboard scraped with thimbles. This use of everyday objects to make instruments put music-making within the financial reach of ordinary young people. At its peak there may have been up to 50,000 UK skiffle bands, and one of these was in Turvey.

We discovered that Turvey had such a band, Buddy Cones and the Blackjacks, in March 2021 when Turvey History Society was approached by James Frost, the son of one of the former band members, in advance of his father’s 80th birthday.  He wondered if we had any information about the Skiffle Group which was remembered fondly in anecdotes at family gatherings.  James believed there might have been a gramophone record which he wanted to present at the birthday party because his father had not been given a copy at the time. He thought some Hartwells were in the group with his father Albert.  Russell de Ville, a member of our Research and Writing Group,  caught up with Nigel Hartwell who still lives in the village and features in our Village Voices (https://www.turveyhistory.org.uk/voices/nigel-hartwell).  Russell found out that the skiffle Hartwells were Nigel’s brother and cousin.  To everyone’s delight, Nigel had borrowed the record to make a CD of their two recorded cover songs.

Nigel talked to me about Bryan, his brother, and Tony Hartwell, his cousin, and the other band members he remembered:  Bill Everitt and Eric Herbert, who went to Ireland, but allowed Nigel to copy the record.  Nigel thought Alan Richardson might have helped with equipment.  Nigel remembered Michael Stapleton playing in a band with his brother.  Nigel had played in a band at his workplace described initially by a visiting lorry driver as making “a bloody row” but then the driver conceded they were “not too bad”.

Nigel gained permission from his brother, now living in Whitehaven, for a telephone interview.  Bryan clarified to me that Buddy Cones and the Blackjacks (Bryan’s version of the name) performed skiffle music between 1958 and 1960.  Some were Turvey residents who were apprentices at WH Allen in Bedford.  Band members were:  Bryan Hartwell on guitar, Albert Frost on the tea-chest bass, Tony Hartwell on washboard and thimbles, Bill Everitt playing guitar and lead singer, Dennis King another singer, Eric Herbert (not from Turvey) on drums.

They practised in each other’s houses, finding Picts Hill a useful rehearsal space.   They played in pubs and at parties, often for birthdays.  Bryan thought they might have played in the Kings Arms.   Their best gig was at Tyringham House for a Newport Pagnell company event.  Bryan remembered being given wonderful food.

James Frost read Bryan’s interview notes to Albert, triggering more memories. Albert recalled them playing at the Granada Cinema, Bedford Corn Exchange and at The Three Fyshes, outside on the lawn. The photograph above was taken when they performed in the WH Allen Function Room. Albert was very proud when they won a skiffle competition. The skiffle groups performed in a small venue on Ashburnam Road, Bedford.

Their outfits were black trousers, and white shirts with a bootlace tie as can be seen in the photograph of them at the top of this article with different spellings of names and calling the band Buddy Cones and his Blackjacks.

At WH Allen, Bryan was an apprentice sheet metal worker fabricator.  He continued there once fully skilled, then moved to a Wellingborough company.  He later worked in architectural metal work concentrating on aesthetics to the point of selling bronze and patinated copper items to the King of Jordan.  Albert Frost and Bill Everitt were also WH Allen apprentices.  Dennis King worked on a farm in Turvey.  Tony Hartwell worked in a garage in the village.

In the mid-60s, two members of the skiffle group formed a pop music group “Hi-Fi Five” in which Bryan played keyboard with Eric Herbert as the drummer.  John Coles played guitar with Michael Stapleton as the singer.  Dave Lea from Olney was another singer with Alan Coles, also from Olney, on bass guitar.  They played Beatles and Manfred Mann covers.

How an enquiry became a celebration

In April 2021, Nigel Hartwell lent Turvey History Society his CD of the skiffle pieces.  Peter Goodland converted them to mp3 files so they could be sent by e-mail to James Frost in time for him to have them converted back into a 78 rpm record (see photograph below).  James thanked THS later in April “You’ve done an amazing job with this and I am SO grateful!  Wow… we’ve been searching for this music for years and years.  My dad never had a copy.  And now, 63 years later, he’ll finally be able to listen to it!  So you’ve made him happy I’m sure.”  The message sent to friends, relations and Turvey History Society after the May party was “My dad looked at the record and then kept saying ‘that’s impossible, that’s impossible’… which was very funny!  Then we put the music on the stereo and he had a jive with my mum (still quite a mover!).” 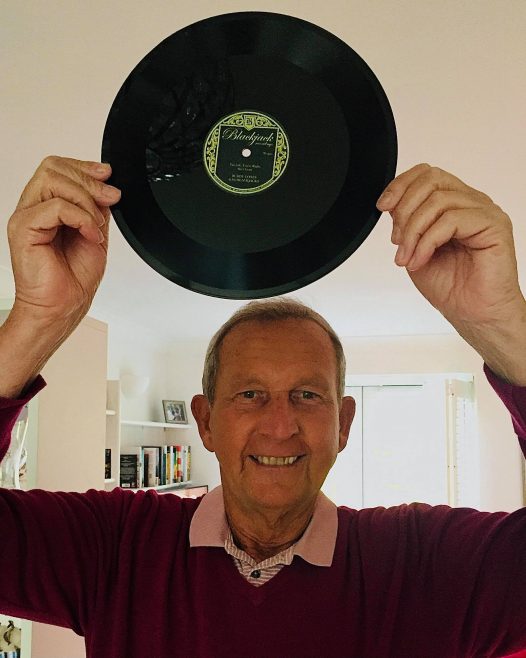 We always hope we can reconnect people with their shared past.

If anyone has any other memories or photographs of the band and its Turvey connections we would be interested in hearing from you. You can either add a comment below or via the ‘Contact Us’ page.