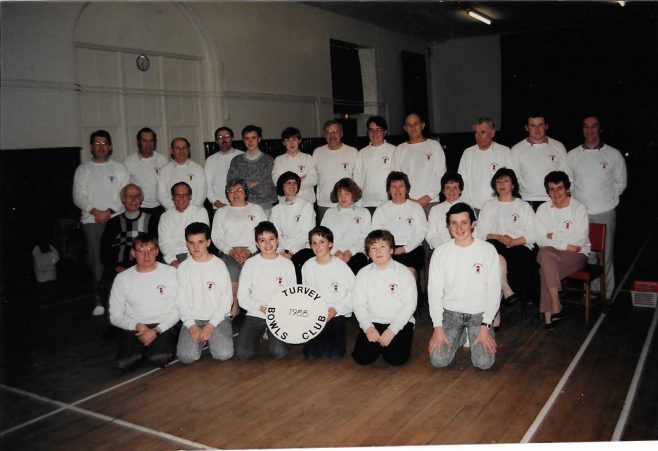 Members of Turvey Bowls Club in 1988

Turvey Bowls Club was founded in 1986; it is part of the English Carpet Bowls Association, and, at the time of writing in 2021, it still meets regularly in the Village Hall.

The game itself originated in England, probably around the end of the 19th Century, when there were more than 1,000 clubs recorded. It was a way of ensuring that the ancient sport of bowling could be enjoyed all year round. It is played on a thick piled carpet, usually 30ft x 6ft, with similar biased bowls to those used in the outdoor game.  The aim is to place your bowl as near as possible to the jack, just as in the outdoor game.  There are obviously no hazardous ditches, but an 18 inch circular block is placed in the centre of the mat, around which players must navigate their bowls.  It is a game of great skill which is played in Village Halls up and down the country.

The founder members in Turvey were Andy Vaughan-Jones, Ivor Skoines, David Easton and Eddie Coles.  They were able to start with a carpet supplied by the Eastern Region Sports Council, but quickly raised money to buy a second mat.  It was a very popular village club with a large membership of all ages, although by 2019 the membership had shrunk to 14 members.

Turvey Bowls Club belongs to the Bedfordshire League, which was started in 1992 with 16 clubs.  There are inter-club competitions for singles, pairs, triples and fours – as well as county competitions in the same categories. Turvey Players have won the Bedfordshire League 13 times in their history – and have amassed a large number of trophies over the years, as photographs show. 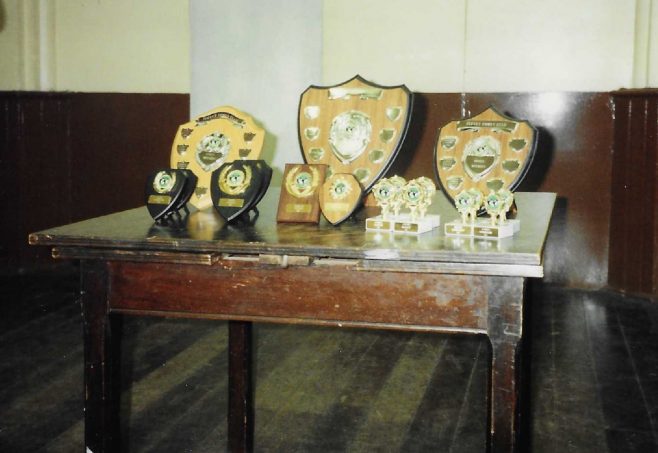 Members of the club also played for the Bedford County squad in Eastern Counties Competitions against Cambridgeshire, Hertfordshire, Essex, Suffolk and Norfolk.  Some members were also involved in the first international match against Norway, which was actually played in Bedfordshire.

It was – and is – a very sociable club with many village ‘notables’ enjoying barbecues and celebratory dinners at a County level as well as locally. Some of the dinners were held at the Laws Hotel, on the High Street, opposite the village Hall; photographs show views of the interior of The Laws before it became a private house. 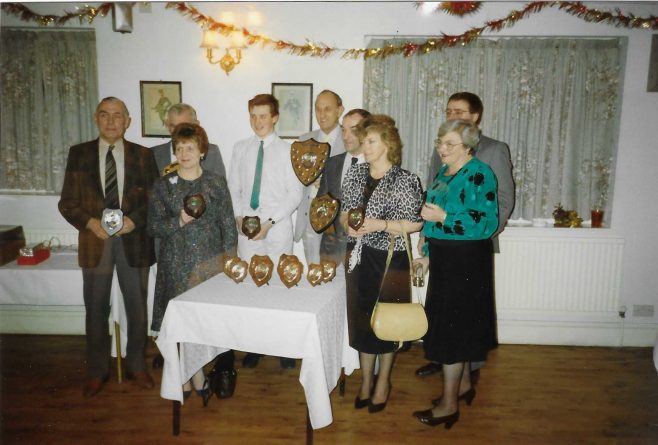 Turvey Bowls Club, Dinner and Presentation at The Laws Hotel

There is also a charitable side to the club; the proceeds of their September Competition are always donated to local charities. One of their most successful fund raisers was the 1989 Comic Relief evening – it is interesting to notice, from the photograph, that, at that time, smoking was still allowed in the village Hall! 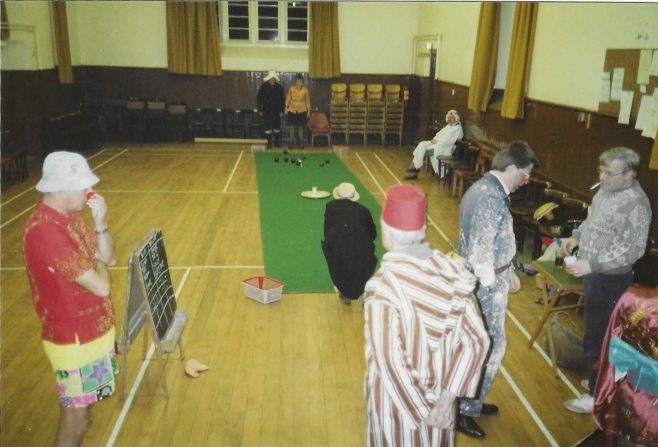