You are here: HomenextTopicsnextTransportnextRailway Accidents 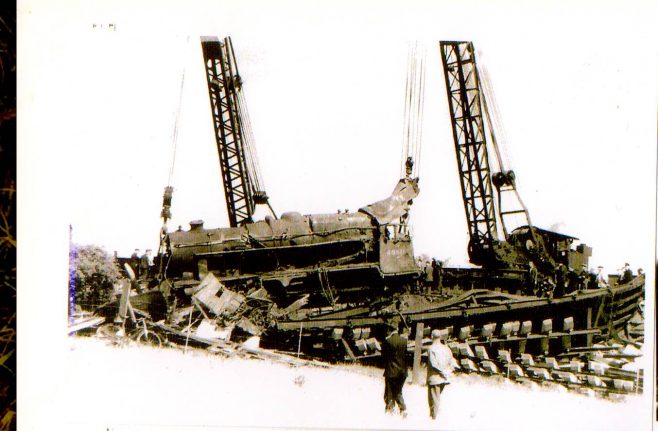 Both the construction and operation of a railway are hazardous activities, and prior to the introduction of modern safety standards accidents were not uncommon. There are records of four accidents on the railway at Turvey, two during construction and two in operations.

The first recorded accident occurred on 24th October 1870. It resulted in the death of William Dainty, aged 22 of Stagsden, who had been working on the line employed by Mr Eldred, one of the contractors, for 6 months. The accident was reported in the Bedfordshire Mercury, dated 29 October 1870. The inquiry into the accident, held in the Kings Arms by the deputy coroner, J P Piper, heard that Mr Dainty had been ‘pecking the earth in preparing for a fall, 8 ft from the surface, in a field called “Goblin’s Hole” when the man who was working with him, named Thomas Broadwith, and the ganger, Thomas Brown, saw some earth falling perpendicularly, Broadwith escaped by jumping on one side, but the earth fell upon the deceased, who was immediately killed.’ The jury gave a verdict of Accidental Death.

The second construction accident occurred on 31st January 1871, resulting in the death of Charles Puddephat, aged 29. Again the inquiry was held on the Kings Arms by Mr J P Piper, and the Bedfordshire Mercury dated 18 February 1871 reported as follows:
‘..the men were engaged upon three lifts or benches of earth one over the other, and the deceased was filling a waggon on the middle lift while two other navvies were undermining there, when a quantity of earth fell from the face of it and injured him that death ensued almost immediately.’

The coroner was concerned at the frequency of such accidents, and so an Inspector of Railways from the Board of Trade was appointed who concluded that the way the work was being undertaken was unsafe, and recommended that ‘in future the men who fill the wagons should not work just underneath where other men are undermining the earth.’

As Railway Inspector had been appointed, this accident was the subject of a letter from the Board of Trade to the Directors of the Bedford and Northampton Railway, the contents of which were noted at their Board Meeting on 31 March 1871.

An early operational accident occurred on 24 May 1892, by which time the ownership of the railway had been transferred to the Midland Railway. According to the Bedfordshire Mercury report, dated 28 May 1892, John French, aged 27, employed by Mr G Osborne of Turvey, was ‘loading bobbing wood, when by some means some wagons unperceived came in suddenly upon him.’ George Brinklow, the station master, administered first aid, but the unfortunate Mr French succumbed to his injuries and died later that day. The inquest was again held by Mr J P Piper, this time at the “Three Fishes”.

The most famous accident

Probably the most famous railway accident that occurred in Turvey occurred a couple of years before the line closed, on 17th June 1960. The driver of a freight train, hauled by the Stanier 8F 2-8-0 locomotive No 48616, misunderstood instructions from the signalman and ran into the rear of an empty passenger train. Three passenger coaches were derailed, along with the engine and three wagons of the goods train which were loaded with 60 ft lengths of track. The driver and fireman leapt to safety as the engine plunged down the embankment and ended up at its foot, with the load split over the site. Both men (from Wellingborough) were injured and taken to hospital, and fire engines from Luton and Bedford attended in case fire broke out. Ralph Leaper remembers the event:

The line was blocked by the accident for several hours, and the engine was recovered using two large rail-mounted steam cranes. The engine was deemed too badly damaged to be repaired, and was officially scrapped in October 1960. One of the cranes is currently under restoration at the Keithley and Worth Valley Railway.

Other accidents on the line

There were several other accidents on the line over its 90 year life. In particular, freight trains often struggled over the gradient of the line from Olney to Piddington, over Yardley Chase, and if they ran out of steam would have to set back to Turvey in order to get the speed through Olney to get to the summit. On one occasion in the early 1930’s the coupling broke on a goods train as it went up the incline, so a number of wagons ran back to Olney, crashing down the embankment into a field. On another occasion, an engine derailed down the embankment close to the river in Olney.