You are here: HomenextTopicsnextHealth and SocietynextThe History of Epidemics in Turvey: Part 3

The History of Epidemics in Turvey: Part 3 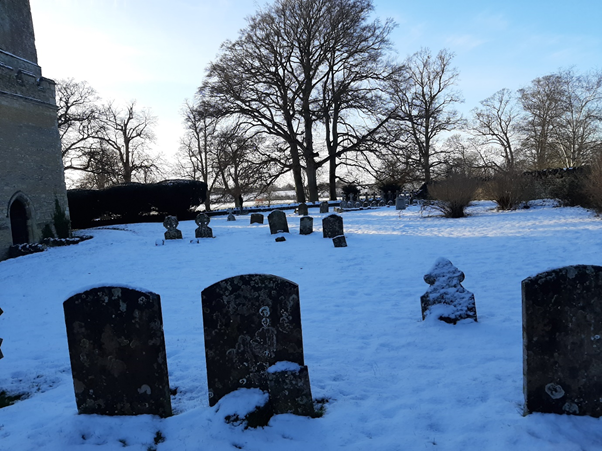 Nineteenth century burial records and the mystery of 1861

Part 2 in this article series left us waiting to see what a search of Turvey’s burial records might reveal about epidemics in Turvey in the nineteenth century. So far, because of Covid lockdown restrictions, only records between 1838 and the end of the century have been accessible, but I have used these to calculate the total number of deaths for each of these years. This is displayed in the graph below:

What is immediately striking about this graph is the peak of deaths in 1861. The average number of deaths for the five years either side of 1861 is 16 and 15, so the 44 deaths in 1861 are very unusual in this decade, and indeed for the whole seventy year period. There were a number of epidemics across Britain in the period shown here but Turvey does not appear to have had significant numbers of deaths in these years (cholera 1848-9, 1854, 1865-6; smallpox 1837-1840, 1871-2; typhus and influenza 1847; influenza 1855, 1889-94[i]). In fact, this accords with the general finding that epidemic disease in this period tended to be more prevalent in urban and industrialised areas with rural communities generally being much less affected. Indeed, records indicate, for example, that there were no deaths from cholera in Turvey in the 1849 epidemic year, although there were 3 from diarrhoea.[ii] Nevertheless something unusual seems to be going on in Turvey in 1861.

Perhaps the ages of those who died might provide some clues?

Figures 2 and 3 (below) show a breakdown of the number of burials by age between 1841 and 1881. Half the 44 deaths in 1861 were children under the age of 15. Figure 2 shows burials for this age group, and here it is clear that the outlier across this age group and over the whole forty year period is the 1861 peak in burials of children aged 1-5 years. 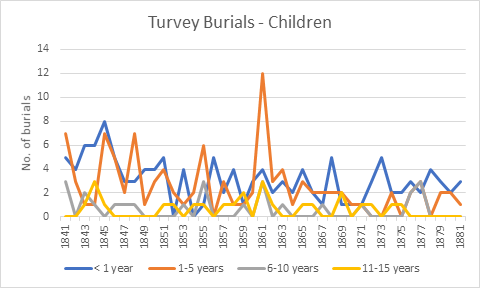 For adults, the graph in Figure 3 shows that the 1861 peak was mostly accounted for by the over 60s. There was an equivalent peak in 1875 also. So, whilst for all age groups there were more deaths in 1861 than in the year preceding or following it, whatever factor was associated with the excess deaths in 1861 was having a greater impact in early childhood and old age. 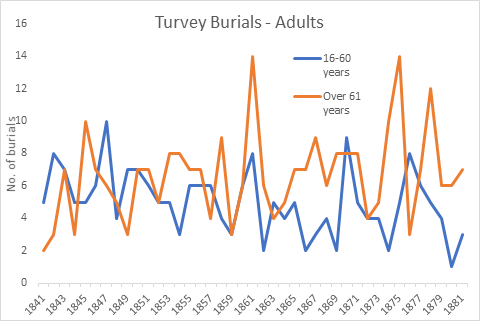 That these two age groups predominated is consistent with the changing nature of epidemic disease in the nineteenth century. By the middle of the century, infectious disease mortality patterns were dominated by childhood diseases (measles, scarlet fever, whooping cough), by respiratory diseases and diarrhoea (affecting mostly children and the elderly), and by tuberculosis.[iii]

What might have been the cause of the children’s deaths?

The most likely candidates for the high numbers of deaths amongst the under 5’s would have been scarlet fever, often called scarlatina, and measles. Scarlet fever was the leading cause of death in early childhood in England in the 1850s and 1860s and affected rural areas as well as urban populations. Much as we now fear a more virulent form of the Covid-19 virus emerging, it is believed that the bacteria causing scarlet fever underwent a change, probably from the 1830s, making that illness more deadly and leading to greater early childhood mortality.[iv] There was an epidemic in Britain in 1840 and Turvey that year saw the second highest number burials of children aged 1-5 years in the period 1838-1900 (8 in total). Creighton in his ‘History of Epidemics in Britain’ writing about the scale of deaths from scarlet fever in the middle decades of the nineteenth century thought this “will appear in the history as one of the most remarkable things in our epidemiology”.

It seems then that scarlet fever might have been the most likely candidate for the deaths of all those children in 1861, or so I thought until I came across a publication of the Epidemiological Society of London published in 1863 which reported on epidemic disease in 1861. Remarkably, in the 36 page report covering England, Scotland and Wales, Turvey gets a mention!

The specific reference related to the last quarter of 1861, so was this when the Turvey deaths occurred? The dates on the burial records for eight of the twelve children aged 1-5 were in November and December, so it looks like the reported outbreak of measles could well have been the cause of their death. Whilst measles was generally more serious for younger children, five of the six children aged 6-15 who died in 1861 were also buried in the last two months of the year. None of the Turvey children’s burials were in the autumn when  deaths from scarlet fever were more common.

The cause of the adults’ deaths?

In contrast, most of the over 60s were buried in the summer months, nine of the fourteen between May and August. This is unexpected as older peoples’ deaths typically peaked in the winter months when respiratory diseases were more common. In both 1860 and 1862, for example, four of the six burials of people over the age of 60 were in the winter months. One possibility is gastrointestinal infection, deaths from diarrhoeal disease being, with respiratory disease, one of the main causes of death in the elderly in the mid-nineteenth century. Interestingly, it appears that several of those who died lived near each other. Mary Wooding, aged 85, died in June and Jeremiah Sansome, aged 61, in September, they were living in the same house at Number 2 High Street in the April census. Two doors away, according to the census, and also in September, Ann Shelton aged 75 died. Meanwhile further along the High Street in the census, Sarah Harley, lived at Number 15, and died in May, aged 79; three doors from her Samuel Tysoe, aged 61 died in August. One possibility could be a contaminated local water supply since at that time people were dependent on wells for water, mains water not arriving in Turvey until the 1950s.

Just as now, graphs don’t tell the human stories behind the figures. Perhaps the saddest part of this story is the fact that so many children died. Nowadays when one child’s death in a village community in Britain would be shocking, we can hardly contemplate 22 such deaths in one village in one year. The fact that the population of Turvey was not dissimilar from today gives a further sense of the impact.[vi]

When we look at the families who were affected, the picture that emerges is even more tragic. On the same day, the 20th November 1861, two brothers died, 6 year old Thomas Garlick and 8 year old William. Ten days later the family suffered another tragedy as John, aged 4, also died. The Palmer family also lost two little boys on the same day; John, aged 5, and James, aged 2, died on the 16th November. Two other families, the Cottons and Sargents, also lost two children each within a couple of weeks of each other during November and December.

Measles continued to be endemic in Europe with epidemics every few years until the introduction of a vaccine in the 1960s. It remains a leading cause of childhood death in countries with low per capita incomes and poor health provision.

As we navigate our own challenging epidemic of Covid-19, perhaps a lighter anecdote from Turvey’s history would be welcome. Marigo Argenti, who we met in Part 2 of this series described an episode of measles in her family in May 1901:

I have had a little headache, it is only when I look at the sun that it hurted…..Father took my temperature and it was a 104 then of course they put me to bed and sent for the Doctor…The Doctor had said I was to take  a powder and I am sorry to say I was norty [sic] over it.

A couple of days later her younger sister Gina succumbed and Dr Cock was summoned again and said:

..she might get Misels [sic] so Gina began to cry and said ‘I don’t like Wisels [sic] are they those animals on the trees?’ 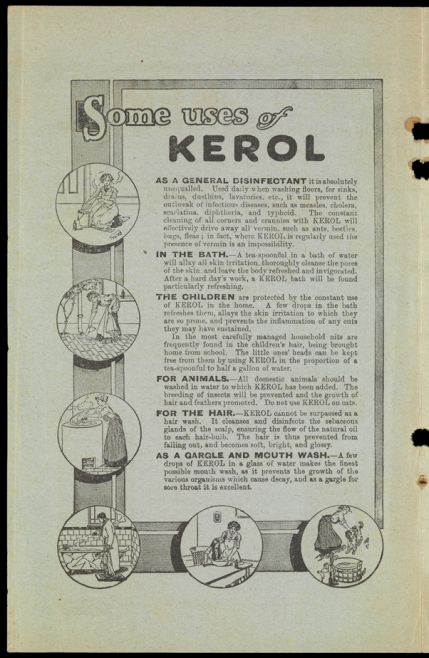 [iii] Davenport, R., The first stages of the mortality transition in England: a perspective from evolutionary biology      pdf2.pdf (cam.ac.uk)