You are here: HomenextTopicsnextHealth and SocietynextThe History of Epidemics in Turvey: Part 2

The History of Epidemics in Turvey: Part 2 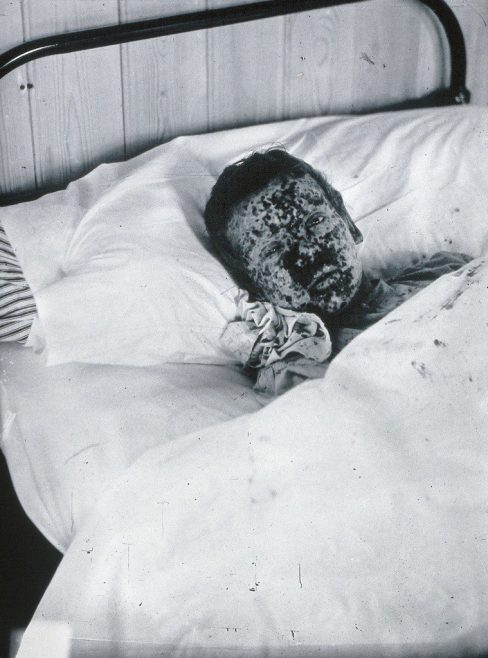 As the seventeenth century came to a close and plague disappeared from England, people in Turvey would have still had much to fear from infectious diseases spreading through their community. One of the most feared was smallpox, the single most lethal disease in the eighteenth century. Symptoms included fever, headache, back pain and delirium and culminated in pus-filled blisters which, in those surviving the illness, left much-dreaded disfigurement in the form of deep pock marks typically on the face, arms and legs. In his memoir of life in Turvey in the 1850s, Joseph Bell recalls a conversation in which he reacted with incredulity because someone told him he resembled his father. He wasn’t too happy about this because his father had been “badly disfiguard [sic] with smallpox”!

Whilst some infectious diseases were more likely to affect the poor, smallpox spread amongst rich and poor alike. Two sons of Charles Mordaunt, the 3rd Earl of Peterborough and Lord of the Manor at Turvey, died of smallpox in 1709 and 1710. Although the Mordaunts no longer lived in Turvey they were both buried in the family vault here.

There are a number of accounts of smallpox in the local area in the 1730s. Benjamin Rogers, the Rector at Carlton, kept a diary in which he recounts the death from smallpox of Thomas Carter in Turvey in 1731, fourteen or fifteen days after first developing symptoms. The Revd Rogers described the disease raging in Olney for a long time and said this was thought to be the source of an outbreak in Carlton in 1736. On 18th January 1739 he wrote “a great many now die” in Bedford.[i] It is very likely therefore that smallpox would have been a familiar scourge in Turvey at this time.

Just as now in the fight against Covid-19, a combination of actions by individuals and by the authorities were used to try to combat the spread of infection. Quarantine and social distancing have become familiar strategies to us in our present epidemic but were practised centuries ago too. A record in Bedfordshire Archives describes how in 1716 the vicar of Sharnbrook, John Bolton, “hath stood at some distance” to read the service at the burial of smallpox victims.[ii] Pest houses had been used to isolate victims in efforts to combat the spread of plague, and in the eighteenth century many parishes used these to quarantine smallpox victims. There is no record of a pest house in Turvey, but where these were not available the parish might provide payment to ensure the isolation and care of those infected. For example, in Bromham in 1730, payments were made for the care of a pregnant vagrant woman who had smallpox – “14 days board of the nurse nursing her and washing up of the linen”.[iii] Sadly, she and her baby died. The accounts record that 4 shillings were made available for “beer at the funeral”, a practice that was not unusual at the time!

Inoculation against smallpox had been encouraged in England from 1721 by Lady Montague, herself disfigured by the disease, who had observed the practice in Turkey where her husband was the British ambassador. It involved introducing a small amount of infected material into the body via a scratch on the skin to cause a mild form of the disease and thereby trigger an immune response. So far, I have not been able to find any record of this being carried out in Turvey in the eighteenth century, but it is thought that it was used widely in southern England, funded by the parish Poor Law authorities.[iv] There is evidence of this in Bedfordshire[v], so it is likely that it would have been practised in Turvey.

Inoculation though was not without risks, sometimes causing the disease itself and in some cases also leading to death. Edward Jenner’s discovery of a vaccine in 1796 based on the cow pox virus offered a safe and effective protection against smallpox and gradually replaced inoculation over the course of the nineteenth century.

Then, as now, however, these preventive techniques aroused anxiety. In a letter in 1807, Mary Longuet, the mother of Theresa Higgins (the wife of John Higgins of Turvey Abbey) wrote “thank God the baby has got safe through inoculation”.[vi] The protected baby was Charles Longuet Higgins. Thirty years later in 1839 Charles, who by then had qualified in medicine, was to receive a note from his younger brother Henry who was in Wolverhampton. Henry commented that smallpox was prevalent there and asked whether Charles thought he should be vaccinated.[vii] Perhaps both brothers had received the cow pox inoculation as children but 1838-1840 were peak years for smallpox in Britain[viii] so maybe Henry thought he needed further protection.

Vaccination against smallpox became mandatory for babies under three months in the United Kingdom in 1853 but not everyone complied, and further epidemics occurred in 1871/2 and in 1901/2. In October 1901, the Argenti family of Picts Hill were all vaccinated by Dr Bull, perhaps in response to this latter outbreak. Ten year old Marigo Argenti wrote in her diary that “it was very nasty”. We can see from Marigo’s diary that it was important not just for Marigo, her sister Gina and their parents to be vaccinated, but the servants too. A couple of days later she wrote:

Biddy, Gina and Mademoiselle and Mother and Alice and Father’s vaccination is taking but mine is not.

Biddy was the nursemaid, Mademoiselle the governess, and Alice the parlour maid.

The nineteenth century in Turvey: Cholera, influenza and an unexpected discovery in the burial records

Whilst inoculation and vaccination for smallpox might have given some hope to Turvey’s villagers, other infectious diseases would have continued to have a significant impact on the village, especially amongst the poor.

Perhaps one of the most frightening would have been cholera because of its relative unfamiliarity compared to other diseases such as tuberculosis, its high mortality and the speed with which death could occur. In the nineteenth century there were cholera epidemics in Britain in 1831-2, 1848-9, 1853-4 and 1865-6, resulting in over 110,000 deaths in total in England and Wales.[ix] Cholera was more common in urban areas but agricultural counties, especially in eastern England, were less badly affected.  It wasn’t until 1854 and Dr John Snow’s discovery of a water pump being the source of a high number of cholera cases in an area of Soho in London that the transmission of cholera through water contaminated by sewage was understood. 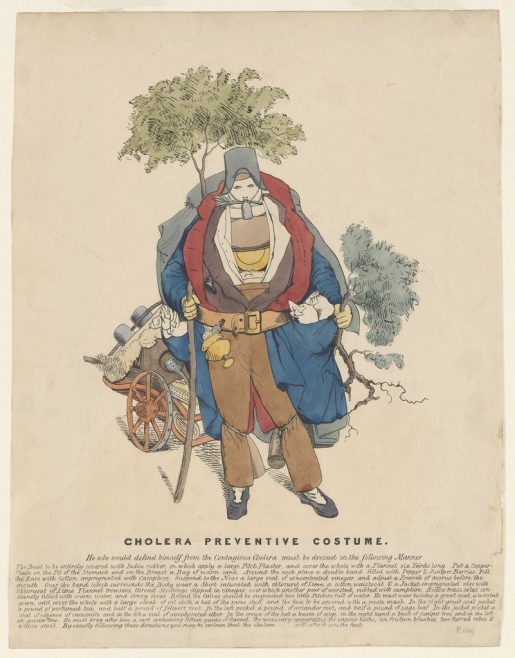 There is anecdotal evidence in the writing of Revd George Munby (Rector of Turvey 1869-1905) of cholera, and consumption (tuberculosis), in Turvey in the early years of the nineteenth century. Writing in 1908 about the improvements in village housing brought about by Charles Longuet- Higgins and Thomas Charles Higgins from the mid-nineteenth century onwards he commented:

The need of better dwellings was obvious to all, and had been greatly emphasised by the disastrous presence of cholera in the village, and by the tendency to consumption, only too common, in many families…neither consumption, nor cholera, nor any like evils having ever been heard of amongst them since.

Seventy years earlier, however, Charles’s brother, Henry Longuet Higgins, had been much more concerned about influenza. Henry, although unqualified, was attempting to provide medical care in Turvey and wrote to his brother for advice. Writing on 6th February 1837 he commented that influenza was a “greater evil than cholera” in the neighbouring parishes and a couple of weeks later wrote that he thought 800 people in the village had had influenza. It is not surprising that Henry was reporting this scale of illness. In his major study, ‘The History of Epidemics in Britain’[x], written in 1894, Charles Creighton wrote “the influenza of January 1837, was sudden, simultaneous, universal” and described the peak of cases occurring between the middle of January and the end of February, just the time when Henry was struggling to cope with the outbreak in Turvey.

Given these various comments about cholera, and the fact that the improved housing and sanitation in Turvey only began as the 1848/49 cholera epidemic was ending, I wondered to what extent Turvey had in fact suffered from the cholera epidemics, or indeed other waves of infectious diseases, in the nineteenth century.

‘Excess deaths’ is another phrase now familiar to us in Covid times. By looking at burials in parish records it would be possible to calculate the total number of deaths each year and see if there were any spikes, or excess deaths, compared to previous and subsequent years. If these corresponded to known epidemic years then this might suggest, although, of course, not conclusively, the possibility that the epidemic had spread to Turvey.

Undertaking this during our own Covid-19 epidemic year with restrictions on visiting Bedfordshire Archives meant that it was not possible to get full information for the century, but from what I could find something interesting, and unexpected, emerged. Article 3 in this series reveals what was discovered – the mystery deaths of 1861!