You are here: HomenextTopicsnextHealth and SocietynextThe History of Epidemics in Turvey: Part 1

The History of Epidemics in Turvey: Part 1

2020 and 2021 will undoubtedly prove to be significant years in the history of the world, as the Coronavirus pandemic affected communities everywhere, including, of course, here in Turvey. In this village, as elsewhere, we have had to adapt to circumstances largely unknown for most people living in the developed world in the early decades of the twenty-first century.

Previous generations though would have been only too familiar with the threat of infectious diseases and their catastrophic effects on individuals and communities. Before the advent of public health improvements, like the provision of clean water and effective sewage systems, and medical advances including vaccination and the discovery of antibiotics, the cause of death of most people in the British Isles would have been infectious disease. Covid-19 has perhaps given us all an insight into what it might have been like living in this village in former times – the lurking fear of catching a fatal illness, efforts to stop the spread of infection, the impact of disease on longer term health or financial security, and, of course, the loss of loved ones.

A brief history of epidemic disease in Britain

An early example of epidemic disease was the Black Death or Bubonic Plague, which ravaged England between 1347 and 1352. It is estimated to have killed between a third and a half of the population. Plague continued to be a major cause of death until the last significant epidemic in England in 1665-6.

Over the centuries since, diseases such as tuberculosis, cholera, typhus, smallpox, measles and diphtheria were both endemic (always present in certain communities) and epidemic (occurring in periodic outbreaks) over the centuries and were associated with high rates of death.

Other diseases described in contemporary accounts are sometimes more difficult to identify now. One such was ‘ague’ which originally was probably used for many conditions causing high fever. In many cases this is likely to have been was what was also often referred to as ‘marsh fever’, now known to us as malaria, which was prevalent, and largely endemic, in the low lying eastern counties until the nineteenth century where it was transmitted by mosquitoes. One writer in 1781 described this as “raging” across Bedfordshire and referred to it as an “obstinate disease, the burning” which made people look as white as paper so that they looked “more like walking corpses than living subjects.[i] We now know that malaria can also cause anaemia which may explain this description. You can read about a case of possible malaria being treated in Turvey in another article – ‘The Doctor will see you now’.

Smallpox frequently appears in the history of epidemic disease and was probably the most lethal disease in eighteenth century England. Edward Jenner’s discovery of a safe and effective vaccine in 1796 led to a widespread programme of immunisation. Despite this, it was nearly two hundred years before the World Health Organisation was able to announce in 1980 that smallpox had been eradicated from the entire world.

By 1850 nearly half of all deaths in Britain were still due to infectious diseases. Between 1848 and 1872, tuberculosis, caused by a bacterium which is transmitted, like Covid-19, in respiratory droplets, was the leading cause of death of adults. Cholera, transmitted through water contaminated with bacteria and still prevalent today in areas of Africa, Asia and Latin America, occurred in four epidemics in Britain in the nineteenth century. About 53,000 people died in England and Wales in 1848/9 during the worst of these.[ii] More recently, the scale of the Covid-19 pandemic has brought to our attention many comparisons with the influenza pandemic of 1918-19 in which a quarter of the British population were affected and 228,000 died.

Infants and children were particularly vulnerable to infectious disease. A study of small towns and villages in England in 1640 found that nearly a third of children died before their tenth birthday.[iii] In the nineteenth century, around 150 out of every 1000 children died in the first year of life[iv], in 2018 the corresponding figure was 4. As late as 1901, 140,608 children under the age of one died[v] – a striking figure when compared to the 97,329 deaths of all ages within 28 days of a positive Covid-19 test recorded in the UK by 23rd January 2021.

Since the 1940s, childhood immunisation programmes have been established in Britain for the diseases that were once commonplace – diphtheria vaccination in the 1940’s, whooping cough, tuberculosis and polio in the 1950s, tetanus and measles in the 1960’s, mumps and rubella in 1988 and meningitis in 1992. Before immunisation, these diseases would have accounted for much infant and childhood mortality. For example, half of the deaths from diphtheria in the nineteenth century occurred in the under-fives, and four-fifths of the remainder in children aged 5-13; 95% of deaths from scarlet fever were in those under ten years old.[vi]

So, what can we discover about how epidemics might have affected Turvey through the centuries?

A medieval plague burial in All Saints churchyard?

In the Turvey Abbey Scrapbook John Higgins describes a fascinating discovery in 1825 when the foundations for the family mausoleum were being dug in an area of the All Saints churchyard where it was believed that there had been no previous burials:

…the decayed remains of (at least) eighty bodies were discovered which were apparently buried without coffins…It was amongst other things remarkable that a number of small shells were found in the orifice of some of the bones when they were broken by spades.

The remains were later reburied in the north-east corner of the churchyard. 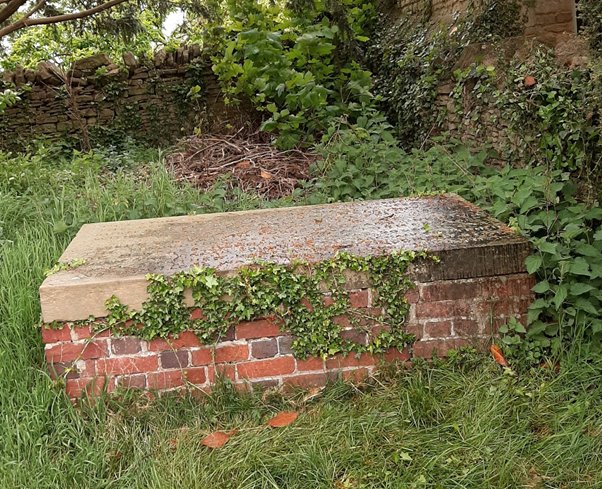 What are we to make of this discovery? One theory is that the remains were from a mass plague burial, possibly from the time of the Black Death. However, whilst plague burial pits have been discovered in London where the authorities were unable to cope with the scale of death, they are virtually unknown elsewhere in England. It had been thought that rural areas, with smaller numbers of deaths, might have been more able to accommodate Black Death burials within individual graves in local churchyards. However, in 2013 a mass grave was discovered at rural Thornton Abbey in Lincolnshire.[vii] Excavation of the Thornton Abbey site found the remains of at least 48 people and subsequent analysis of skeletal material dated the remains to the fourteenth century and found evidence of the plague bacterium Yersinia pestis.

I contacted Dr Hugh Wilmott, Senior Lecturer in European Historical Archaeology at Sheffield University, who led the Thornton Abbey excavation, to ask for his views on the nineteenth century Turvey discovery. He said the finding of so many skeletons in a confined area would suggest that this had been a mass grave, although it was not possible to say this with certainty. Without clear evidence he was understandably cautious about making links with the Black Death but said this would be an obvious candidate. He explained that the lack of discovery of 14th century mass graves is probably because, if they were used, they would most likely have been in parish churchyards where archaeological investigations are not common. The mass burial sites that have been discovered, such as Thornton Abbey and the Smithfield site in London, are no longer used as burial grounds.

Dr Wilmott was puzzled by the mention of shells in the bones’ orifices but said that shells have occasionally been found in individual medieval burials. In such cases they have been thought to be tokens associated with people who had obtained them on pilgrimages to holy sites. Dr Willmott, however, thought the description of the Turvey find sounded somewhat different from these other cases (the shells most commonly described in association with pilgrims are larger scallop shells).

Was the Black Death in Bedfordshire?

Although records of the period of the Black Death are scarce, there is evidence that it spread to Bedfordshire, peaking between March and August 1349. Fifty-four clergy died across the county and the spread of these parishes suggest that no one area was completely free of the disease.[viii] When the plague struck a village there was devastation. People would have died in their cottages, by roadsides and in the fields, and crops and farm animals would have been left untended. In Pavenham, the dovecote became ruined without people to look after it and the water mill, which had been worth 70 shillings before 1348, was worthless by 1349.

The scale of the impact on the local population is revealed in some recent research by Dr Carenza Lewis from the University of Lincoln.[ix] Dr Lewis developed a novel technique to estimate the reduction in human population before and after the period of the Black Death. The research involved digging archaeological test pits in various localities and looking for, and then counting and dating, sherds of pottery found in the pits. Pottery was extensively used in eastern England in the medieval period, but vessels were easily broken and frequently thrown away. It is assumed therefore that the more pottery fragments found then the greater the population living in the area at the time, and any reduction in the amount of pottery found after the period of the Black Death would indicate a reduction in population.

Dr Lewis, working with volunteer members of the public, examined test pits across eastern England and found 90% of the settlements investigated showed a decline in pottery over the time period. Overall, the reduction in the amount of pottery found was about 45%. Of particular interest to us here in Turvey is the fact that 68 of Dr Lewis’s pits were dug nearby, in Sharnbrook, and that these yielded a 41% reduction in pottery. If the assumptions behind this research are correct, then this adds to the evidence that the Black Death was indeed present and causing significant population loss in nearby villages. If this was the case in Turvey too, perhaps the 80 people found buried together in Turvey’s churchyard in 1825 may well have been victims of the Black Death, 500 years earlier.

Plague outbreaks continued in Bedfordshire until the seventeenth century. An account in 1630 reported it to be “so generally dispersed” in the county that the training of infantry and cavalry soldiers had to be postponed.[x] However it is likely that there was nothing as widespread or catastrophic in these subsequent plague epidemics as the Black Death, and by the eighteenth century smallpox had become the disease to fear, as we shall see in Part 2 of this series of articles.

[iii] Shaw-Taylor, L. An introduction to the history of infectious diseases, epidemics and the early phases of the long-run decline in mortality, Economic History Review, 73, 3, 2020.

[iv] Anderson, I. The decline of mortality in the nineteenth century: with special reference to three English towns, Durham University thesis, 1993. http://etheses.dur.ac.uk/5687/