You are here: HomenextTopicsnextEnvironmentnextTurvey Sheep Shearing and Turkey Plucking Champions 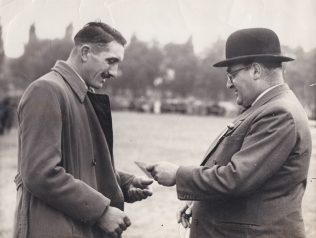 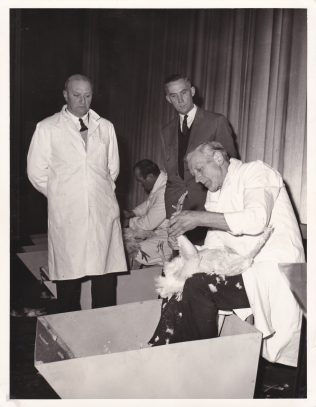 Turvey born Malcolm Church is a repository of rural recollections, He relates that in the late 1950s/early 1960s his father, Sydney, was a contract sheep shearer who took Malcolm out of school to work on local farms as his assistant to bring him the sheep:  “If dad wanted me for one reason or another, we’d just go off sheep shearing for the summer.  I’ve been in and you catch sheep, and there’s certain ways you can handle sheep.  Well for a start if you get hold of the bottom jaw, right, you can put your finger behind their front teeth and just hold them by the bottom jaw.  And if you hold them by the hock, which is basically just below the knee on a sheep, and lift that up so they’ve all their weight on those three legs then they can’t pull.  What you do is basically sit it on its backside and take it to wherever you wanted it.”  The skills acquired over the shearing season ensured that when the Bedford Granada Cinema ran a sheep shearing competition on their stage, Sydney Charles Church (see photograph:  Sydney is on the left receiving his award) was a champion, “he was very good, he won competitions.”  Local resident and former Farm Manager for Turvey Farms Ltd., .Ralph Leaper recalled his brother, John Leaper, losing to Sydney.

On the same Bedford Granada stage, Ralph Leaper entered the turkey plucking competition (see photograph:  Ralph is in the middle), only to be beaten by the Turvey man on the right.

Bedford Virtual Library explains the history of the Granada cinema.  “Granada managers in the 1960s were keen to market new films with ingenious promotions. Events included a turkey plucking contest for “Crooks in Cloisters” with an appearance by actor Melvyn Hayes.  There was a sheep shearing contest on stage in 1965, to accompany a Western – one animal escaped into the stalls.”  The Bedfordshire Times of 14 December 1934 dedicated several columns to the full prospectus of Granada (Bedford) Limited.  Directors included Sydney and Cecil Bernstein (The Bernstein Theatres Ltd.), Ernest Blake (Blake Bros. Theatres Ltd.), Sir Thomas Keens (B. Laporte Ltd.) and Cecil Tingey (John Bull & Co.).