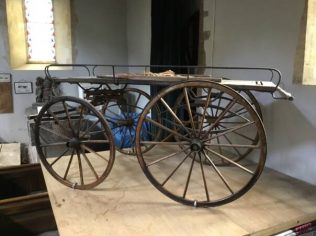 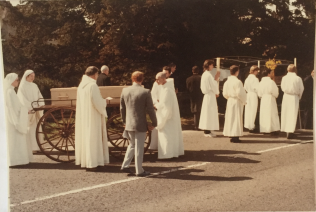 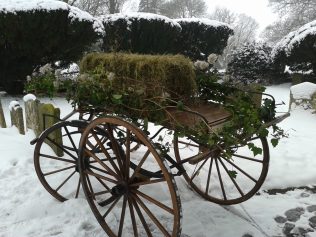 Before going up to Cambridge in 1826, Charles Longuet Higgins (1806-1885) secretly set himself three objectives in life. The first was to re-edify and enlarge the parish church at Turvey, the second was to rebuild the cottages on his paternal estate as well as to erect new schools and the third was to establish a library for the use of the Clergy of Bedford. There can be no doubt that he achieved the first two of these ambitions, but it was not until 1852 that he had built what we now know as the Manor Room for the library. Creating a theological library proved a daunting task so he decided to create a museum. But this was not to be a museum of artefacts brought together from around the world, this museum would be one that captured and celebrated the heritage of the local community. His ambition was never achieved.

A second attempt came in early 1980’s when a group of villagers formed Turvey Heritage whose ambition was to make a record of the history of the village and collect and display artefacts pertaining to that history in a local museum. The Chairman was Roger Forrester and Elizabeth Underwood was Treasurer. On this occasion, the Village Pound (now a small residential property opposite the Primary School) was identified as a possible location for the museum. The initial focus was twofold: the restoration of the Parish Bier, which it was envisaged would form the centre piece of the exhibition and research into the making of Bedfordshire lace within the village.

The Parish Bier, which was in a poor state, was rescued by Pat Cartwright of Elderswell Farm who stored it in a barn. Sylvia and Graham Ripley, then living at Priory Farm, held a series of musical concerts to raise money to fund its restoration; this was carried out by a team from the government Youth Training Scheme (YTS). The restored bier was used at the funeral of Dom Edmund Jones OSB in 1985 and of Pat Cartwright in 2012. The bier is now on display at All Saints Church.

Awareness of the strong links that Turvey had with the Bedfordshire lacemaking industry prompted one committee member, at that time resident in Grange Cottage on the High Street, to seek out pieces of lace belonging to local residents and curate a highly successful exhibition of the lace at the cottage. As a result of this interest the art of lacemaking was revived within the community and led to the opportunity for children at the then Turvey Lower School to join an after-school club to learn how to make lace.

An important event in the history of Turvey uncovered by Turvey Heritage resulted in the introduction of one of the village’s most successful social events: Bonfire Night. It was claimed that one of the conspirators of the Gunpowder Plot was arrested on Turvey Bridge. Although further research has proved this not to be entirely accurate, a definite link does exist. Robert Keyes, who was employed by Henry Mordaunt, 4th Lord Mordaunt, was trusted by Robert Catesby, the plot’s author, to guard the explosives stored at his lodgings in London until they were moved to the Houses of Parliament. After the plot was discovered Keyes escaped to Lord Mordaunt’s home at Turvey Old Hall. His wife, Christina, was governess to the Mordaunt children and it is thought Keyes went there to bid his wife goodbye. He was subsequently arrested on 9th November in Warwickshire and taken to the Tower of London. He was tried, found guilty of treason and hung, drawn and quartered on 31st January 1606.

Lord Mordaunt was also implicated in the plot, taken to the Tower and questioned but eventually exonerated and released on payment of a substantial fine of 10,000 Marks to the Star Chamber. This discovery prompted Turvey Heritage to propose to Turvey Recreational Association the possibility of a village Bonfire Night. For the first year, 1982, £500 worth of Standard fireworks were purchased, the second year’s fireworks were purchased from the Rev. Lancaster at Kimbolton School and involved committee members attending a workshop there to learn how to manage the display safely.

During this time a member of Turvey Heritage, who was also on the Turvey News team, worked with another team member to carry out extensive research in the Bedfordshire Archives and published a series of articles in Turvey News charting the history of the village.

It eventually became clear that the idea of a museum was not feasible due to the high cost of acquiring and staffing a building and ensuring the security of the artefacts on display, so Turvey Heritage was disbanded.

In the early year of this century another attempt was made to realise Charles Longuet-Higgins’s dream of creating a Local History Museum in the Manor Room.  Archives previously stored in the Old Rectory had been moved to Turvey House, but repairs there meant a new home was needed.  A small group of enthusiastic villagers met to form a History Society for Turvey.  The intention was to establish a small museum in the Manor Room where both original documents and artefacts could be stored and where villagers could be part of creating a living archive and learn from what others had researched.

All Saints Parochial Church Council (PCC) had given their approval for this and one of the group members went on a course to learn how best to preserve and store the archive.  Once again, all the plans came to nothing when it was discovered that the Manor Room was far too damp to preserve valuable material. It is interesting to note that, nothing daunted, two members of that group are now on the Steering Committee of THS!

The aim of the Turvey History Society is very similar to the previous attempts to capture the heritage of the village, the difference being the ability to use modern technology to record and store items. The value and success of the society will be measured in its ability to create a community of villagers willing to research and contribute articles, to offer up their memories through the Village Voices sub-project and to provide material that may be scanned or photographed for inclusion in the on-line archive.

The hope is that modern technology will enable the History Society to overcome the barriers met by earlier attempts and fulfil Charles Longuet Higgins’s 160-year-old vision of creating a local history that celebrates Turvey’s heritage for present and future generations.